NEPAL: Adapting to Climate Change Can be Simple

KATHMANDU, Aug 17 2011 (IPS) - Saraswoti Bhetwal’s terraced fields stand out in the sub-Himalayan Lamdihi village as a mosaic of shapes and colours formed by beans, bitter gourd, chilly, tomato, lady’s fingers and other crops. 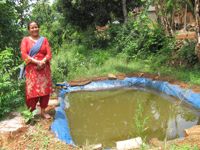 The reason for this abundance is simple. She took the training offered at a watershed management project run by the International Centre for Integrated Mountain Development (ICIMOD) in Kathmandu seriously.

“After attending ICIMOD’s interaction programmes, where several experts offered help to famers like me, I realised the importance of integrated land management in boosting production,” she told IPS.

Saraswoti’s success at adaptation became apparent last year when a prolonged dry spell during the monsoon left her unscathed, but damaged her neighbours’ crops in Lamidihi, which falls in the Jikhu Khola watershed of Nepal’s Kavrepalanchok district, 45 km east of the national capital.

“I have been telling the others to adopt the same simple water management techniques that I learned at ICIMOD in order to avoid losses from erratic rains that is said to be caused by climate change,” she said.

Nepal’s farmers felt the impact of climate change worst during the 2008-2009 winter drought when most of the country received less than 50 percent of normal rainfall while average temperatures were one to two degrees Celsius above normal.

With wheat and barley production dropping by 15 percent and 17 percent respectively and maize severely affected, the World Food Programme (WFP) has had to step up aid. .

WFP is expected to provide food to 1.2 million Nepalese this year at a cost of 98.5 million dollars, particularly in the mid-and far-western hills of Nepal, a country considered among the poorest in the world.

Saraswoti said that farming has been difficult for several years now because of erratic rainfall and the consequent shortfall of water for irrigation in the natural springs.

“Over the last few years, farming has become increasingly tough with the lack of proper irrigation and the long-standing droughts,” she told IPS. 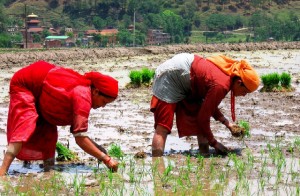 An abundance of rain is no longer the norm in all areas of Nepal, forcing farmers to learn about alternative irrigation measures. Credit-Mallika-Aryal/IPS.

“Changing climate has baffled farmers in many parts of Nepal and they need institutional support for combating impacts as this involves improvement of soil fertility and land management through integrated farming practices,” says Tek Chand Mahant at ICIMOD.

Farmers attest to the new difficulties from climate change that they are facing. “Earlier the rains used to be so predictable that we could rely on it, but now we can never be sure about rains. We have no idea what is happening,” says Ramesh Kamal, a famer in Dhulikhel village.

Sarswoti swears that she has survived as a farmer only because she switched over to the integrated farming methods she picked up from ICIMOD’s watershed management project.

“Earlier, I could grow just one maize crop a year in the rainy monsoon season and had to leave the land fallow for the rest of the year. But now I grow three crops a year using drip irrigation, water harvesting and other simple technologies.”

Saraswoti’s 0.7 hectare of red-soil terrace lies at an altitude of about 860 metres with the sub-tropical climate and average annual rainfall of 1,200 mm conducive to agriculture, provided the rains do not play truant.

Saraswoti has new challenges. “My drip irrigation pipes get eaten by rats frequently. When that happens, I have to change them, but I am confident that ICIMOD experts will have a solution.”

Regarded as a country that is most vulnerable to climate change, Nepal is looking to better cultivation practices by its farmers as an important way to cope with impacts.

“Sustained production has always been a key concern to farmers in these parts,” says Mahant.

Yet, many farmers in the area are only beginning to wake up to the new technologies. “Our effort is to attract more and more farmers towards the examples like that of Saraswoti,” says Nira Gurung, communications officer at ICIMOD.

ICIMOD has set up a demonstration centre in Lamdihi village, where Saraswoti shows other farmers techniques such as roof water harvesting, creating plastic-lined farm ponds, drip irrigation, composting and terracing.

“Saraswoti serves as our model. From growing one maize crop a year, she now harvests rice, potato and vegetables thrice a year,” said Mahant.

Last year, says Saraswoti, the rain was scanty and the roof water lasted only for five months. “But I was still able to grow crops, though the production was not as good as the previous year,” she told IPS. Now the people come to learn from her success.

“I am impressed by the way she is dealing with drought and other harsh weather conditions. All this is worth emulating and that is why I am here,” said Madan Sherpa, a neighboring farmer who had come to see Saraswoti’s lush terraces.