KATHMANDU, Aug 9 2011 (IPS) - When Binita Lamichhane got married she was troubled by her husband’s bloodshot eyes. “What happened to your eyes?” the 18-year-old bride asked. “Smoke,” came the answer. 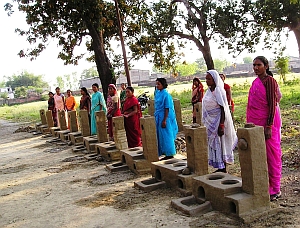 Nakul Lamichhane, the young groom, was the son of landless agricultural labourers who had to cook the family meals while his parents were away tilling others’ fields.

The cooking stove – an open fire on three bricks packed with a layer of mud – filled the single-room house with smoke that blackened everything and caused the family members respiratory ailments.

“It’s a common problem in Nepal’s villages,” says Binita, now 29 and the mother of two. “My mother had severe asthma but we never realised it was due to the smoke. There were also frequent deaths due to asphyxiation.”

In Nagarkot, a picturesque tourist destination in central Nepal’s Bhaktapur district where Binita lives, a neighbour died two months ago due to her smoking stove, she says.

The human misery apart, greenhouse gases (GhGs) and black carbon produced by inefficient combustion of wood and biomass have been identified as prime agents in global warming that is said to cause climate change.

A report published this year by the International Bank for Reconstruction and Development and the World Bank – ‘Household Cookstoves, Environment, Health, And Climate Change: A new look at an old problem’ – says developing countries annually burn about 730 million tonnes of biomass fuel for household use, releasing several GhGs.

In areas close to ice and snow accumulations like the Himalayas, the study says, there is evidence that soot from cooking stoves is accelerating the melting of glaciers. Soot is suspected to be behind shifts in rainfall patterns in India and China.

Global inventories have found that traditional stoves account for nearly one-fourth of soot emissions. These stoves also consume vast quantities of firewood, leading to rapid forest degradation which, if unchecked, could lead to deforestation.

In 2008, the Alternative Energy Promotion Centre (AEPC), under Nepal’s environment ministry, commissioned a study that found indoor air pollution (IAP) to be the fourth most important health risk factor after malnutrition, unsafe sex and unsafe drinking water and sanitation.

Among the poorest countries in the world, most of Nepal has no electricity, and cooking gas is both expensive and in short supply, having to be brought from India, Nepal’s southern neighbour.

A beginning was made in the 1980s when Nepal included improved cooking stoves (ICS) in its planning, and the research centre for applied science and technology under Tribhuvan University developed a model based on local materials.

In 1999 a sustained campaign was launched by AEPC to get villages to switch to ICS under its Energy Sector Assistance Programme (ESAP) with financial support from the Danish government.

“About Nepali rupees 370 million (5.1 million US dollars) were allocated for ICS in two phases,” says Karuna Bajracharya, manager at ESAP.

“The first phase ended in 2004 and the second started from March 2007. Supported by Norway, it will continue till 2012. By June this year, we had set up almost 480,000 stoves. They reduce fuel consumption by at least one-third and eliminate health hazards.”

AEPC’s strategy is to create a network of promoters who are trained to make the ICS and then persuade villagers to adapt them. “Our policy is to train three people in each village development committee,” says Bajracharya. “At least two of them have to be women.”

Besides improving lives and the environment, the ICS is also empowering village women.

Sushila Gaire lives in Kapilavastu district in southern Nepal where women have little say in household matters and are confined to the home. But the 29-year-old, who did not finish school, is the family bread earner following her husband’s death.

A trained ICS maker, Sushila now makes about 30 pieces a month, earning about 5-6 dollars per piece. She frequently travels to distant villages to install the ICS and train others.