SWAT, Khyber Pakhtunkhwa, Aug 6 2011 (IPS) - Standing in the busy main market place of Mingora, it is hard to think that just two years ago this city in Swat district was under the tyranny of the Taliban. 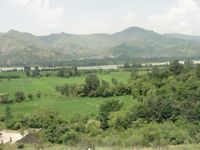 Men shorn of their beards, which were mandatory under the Taliban rule, are a sure sign that the writ of the Islamic scholars no longer runs in these parts. Even women, draped in simple chadars (shawls), can be seen bustling about the streets.

Memories are still fresh of the days when Swat was a hotbed for the Tehrik-e-Taliban Pakistan (TTP), the main Islamist group with its trademark bomb blasts and gruesome public displays of the dead bodies of political enemies and those who violated their codes.

In December 2009, a few months before the Pakistani army cracked down hard on the scholars, they murdered a popular female dancer and strung her body up from an electric pole as a warning.

The Taliban ordered women to quit work and torched some 200 girls’ schools so they would stay home. Music, dance and films were banned and shops selling videos and entertainment material became prime targets for arson.

That video shops have reappeared in Swat is one more sign that normalcy is returning to this valley, once called Udhyana (garden), and likened by modern tourists to Switzerland for its alpine beauty.

Authorities hope that the archaeological sites, trout fishing and other charms of Swat, plus its hardy population of 1.8 million, can restore the status of the valley as a world tourist destination.

That may be a long haul. As the army cracked down on the Taliban some 800,000 people fled to safer places and most businesses shut down.

In 2010, just as people were beginning to return another scourge hit them – the devastating floods that affected a fifth of Pakistan as the Indus river overflowed its banks.

With 338 hotels and restaurants in the valley, 43 percent of all business in Swat has to do with the hospitality sector, according to a survey carried out by the United States Agency for International Development (USAID) in April 2011.

USAID estimated capital losses, over the last three years, to be around 86 million Pakistani rupees (one million dollars) and revenue losses around 27 million dollars, with almost 15,259 individuals affected in the hospitality sector alone.

USAID concentrates on propping up the tourism industry, leaving the work of infrastructure development to the Provincial Relief and Rehabilitation Settlement Authority of the Khyber Pakhtunkhwa province.

“Along with rebuilding infrastructure there is a need to support the private sector to rebuild their businesses,” says Aftab Rana, tourism development consultant with USAID’s ‘Firms Project’ that is committed to improving businesses in Pakistan.

“People will want to come to Swat but there will not be many places to stay, so restoration of the hotel industry in the valley is vital to reviving tourism here,” Rana said.

The project is already providing construction material, equipment, production inputs and technical assistance. A total of 5.25 million dollars in direct assistance will be provided and this is expected to help restore 1,000 jobs in the hotel sector and benefit some 10,000 people. According to the USAID survey, 53 percent of the hotels are now operational, but at a quarter of capacity. Key reasons given by the hotel operators for this dormancy include lack of working capital, damages due to the conflict and the security situation.

Despite anti-U.S. sentiments running high across Pakistan, the hoteliers have lapped up USAID funds without question.

Hostility towards the U.S. in Swat and other areas of northwestern Pakistan are a direct result of the drone attacks launched since 2009 against the Taliban by the U.S. army from neighbouring Afghanistan that have killed thousands of civilians.

“As far as I know not a single person who was offered assistance refused it,” said Said Nawab, president of the Upper Swat Hotel Association. “We know who is giving us this money, it is the American people; not the American government,” he justified.

While the security situation may have improved, the road network and telecommunications were hit too hard by the militancy and the floods for quick recovery.

Not everyone is convinced that the peace in Swat is real and lasting. “All the top leadership of the TTP were allowed (by the army) to flee,” is the common refrain.

“The fear remains and they cannot wipe out the ghastly images of (Taliban) violence,” says Falaknaz Asfandyar, whose husband Asfandyar Amirzeb, grandson of the waali (ruler) of Swat (a princely state that merged with Pakistan in 1969), was killed in a bomb attack. What keeps the peace is the overwhelming presence of the army which mans 30 check posts along a 90 km strip connecting Mingora to Kalam (a popular tourist town in Swat). A few local tourists from Karachi said they felt uneasy and intimidated.

As the shop shutters are pulled down in the evenings they invariably reveal the white crescent-on-green of the Pakistani national flag along with the legend “Long Live Pakistan Army”.

Shopkeepers confide that the army forces them to paint their shutters that way.

“They (army personnel) are rude, make you wait forever at every check post, take their time looking through papers, and you dare not tell them to hurry. They penalise you in humiliating ways like making you do the ear squat,” said an incensed van driver.

But that, acknowledge the valley residents, is the price of peace. The gun-toting soldiers are preferable to the Taliban. “Lesser of the two evils!” said one.