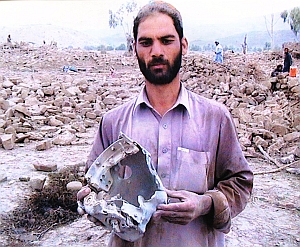 Part of a drone that killed 20, including women and children, on Aug. 23, 2010 in North Waziristan. Credit: Noor Behram/IPS

The exhibition, which ran from Jul. 19 to Aug. 5 at the Beaconsfield Art Gallery in London, will travel to the U.S. in September before being curated in Pakistan in October.

‘Gaming in Waziristan’ is the work of Noor Behram, a 39-year-old photojournalist from North Waziristan. The London showing included 70 of a collection of some 200 photographs taken by Behram over the last three years at 27 drone attack sites.

The title alone suggests the callousness of “videogame warfare” and raises serious doubts about the certainty claimed by the U.S. army and the Central Intelligence Agency (CIA) about being able to hit targets precisely while sparing civilians.

Behram’s work corroborates the findings of local journalists in North Waziristan who, supported by the London-based Bureau of Investigative Journalism (BIJ), came up with a study last month that revealed unacceptably high civilian casualties in drone (pilotless aircraft or missile) attacks.

Mirza Shahzad Akbar, a Pakistani human rights lawyer, who helped organise the photo exhibition, told IPS that Behram reached the spots of 60 drone strikes of which he was able to take footage in 27. He also witnessed five of the attacks.

“Often, he was stopped from taking photographs or making a film,” said Akbar. “At one village, where all the civilians died, relatives from adjoining villages, who were burying the dead, were so angry with the media that he was prevented from taking any footage or still shots.”

“The photos are important for two reasons,” explains Clifford Stafford Smith, human rights lawyer and founder of the rights group Reprieve, which partnered the exhibition. “One, they show the human toll of the drones in real terms, and two, they prove the total falsity of U.S. claims that there are no innocent victims.”

Reprieve, which is London-based, is independently running a project on drone strikes called “Bugsplat”, borrowing the term used by U.S. authorities to describe the successful killing of significant terrorists or innocent civilians using remote-controlled missiles.

Akbar, who works with survivors and victims of drone attacks, hopes the exhibition will sensitise people in the West to the human cost of ‘videogame wars’ and prod them to ask their governments how taxpayers’ money is spent on killing women and children.

“One hellfire missile,” said Akbar, “costs anywhere between 70,000 and 100,000 dollars and for any drone strike at least a couple are fired.”

Kareem Khan, a correspondent with the Al Jazeera news channel, has a theory about why the drone strikes are going to continue. “It (the U.S.) has lost the war there (in Afghanistan) and, as a face-saving mechanism, it is telling the world that it is in pursuit of terrorists who have crossed over into Pakistan.”

Khan, who belongs to the area, says that the world needs to understand that when the Taliban are a “headache for the world they would equally be a nuisance for the residents of North Waziristan.

“Wouldn’t we want to get rid of them too?” Khan asks. “When media reports that so many terrorists have been killed in a drone attack, they are actually calling a six-month-old baby a terrorist; or a mother of five a terrorist and even an elderly man a terrorist! We are burying these innocent people every day.”

On Dec. 31, 2009, Khan’s 18-year-old son Zainullah and his brother Asif Iqbal, a schoolteacher, were killed in a drone attack in Machikhel in North Waziristan.

Khan, along with Sadullah and Maezol Khan, filed a formal complaint in an Islamabad police station on Jul. 18 against John A. Rizzo, CIA’s former legal counsel.

Sadullah had lost both legs and an eye and Maezol Khan’s seven-year-old son was killed in a drone strike on Sep. 7, 2009 near Mir Ali town in North Waziristan.

Smith thinks Khan’s is an ideal case for prosecution. “What Rizzo did was murder. Kareem has a perfect case – for murder as well as for taking part in an illegal war against Pakistan.”

Akbar argues that Rizzo’s approval of the strikes is based upon unilateral interpretation of international law by the U.S. “Signing death warrants of individuals without there being a court of law, under no scrutiny, laws or regulation, and based on extremely questionable intelligence on the ground is not only arbitrary but criminal.”

Drone attacks started in 2004 and some 42 such strikes were authorised by former president George Bush, according to the New American Foundation. The number quadrupled under President Barack Obama. Altogether, there have been nearly 265 attacks, killing more than 2,561 individuals.

Washington has routinely denied that drones kill civilians. John Brennan, U.S. Deputy National Security Advisor and Obama’s assistant on counterterrorism, has stated that because of “exceptional proficiency” and “precision” there has not been a “single collateral death”.

Rahimullah Yusufzai, a veteran Pakistani journalist who helped the BIJ with its study “to see what was happening on the ground”, found Brennan’s claim to be “baseless”.

“In ten drone attacks carried out in August 2010, we found 45 civilians had died,” Yusufzai told IPS. “It was a tiny report and not very exhaustive, but proves that civilians die in one out of every five strikes.”

According to Yusufzai, there exists no mechanism to collect data. “Media reports the official version which never includes the name or age of victims. Information gathered from the tribal areas is sketchy and, as far as I know, the Pakistani army never verifies who or how many died.”

After each attack, the villagers bury their dead while the militants take away the bodies of their dead compatriots to undisclosed locations.