TUNIS, Aug 5 2011 (IPS) - A women’s group begins campaigning near La Marsa beach in Tunis to convince more women to come up and register in the electoral lists, in time for the deadline now pushed back to Aug. 14. Most of the women watching the proceedings are veiled. 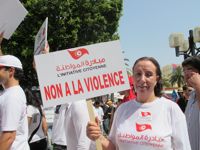 At a protest in Tunis. Credit: Giuliana Sgrena/IPS.

The veils present more a question than a suggestion at present. One survey among veiled women conduced by journalists here claims that four in five of these women will not vote for Ennahda, the Islamist party surging ahead in popularity ahead of elections for a constituent assembly due in October.

Veils in such numbers are an unusual sight in Tunisia where women visit the beach just as comfortably in a bikini as wearing a headscarf, and just as comfortable sipping wine as a soft drink, listening to rap or traditional music.

Looks may be deceptive, one way or another. “Look around,” says Khadija, an activist with the Modernist Democratic Front – a coalition of local Tunisian democratic parties – on another beachfront near the fashionable La Goulette. “Can you see these people living under Islamic law? Tunisia is not Algeria. I am sure it will never happen here.”

But more and more are not so sure any more. “Tunisia is not Algeria” is a slogan of the secularists, determined to see their country more liberal than the largely Islamist Algeria. But worrying signs have begun to appear.

“I can see the Algerian spectre behind what happened in Menzel Bourghiba,” Sihem Ben Sedrine of the National Council for Liberties and chief editor of Radio Kalima told IPS. “Tunisia can find the same nightmare as Algeria in the nineties.”

Several hundred Salafists attacked a police station in Menzel Bourghiba in north Tunisia last month, beat up policemen, five of them seriously, and left with looted weapons. Army men stationed nearby did not intervene. Sihem who went to see the injured policemen in hospital, could find no answer why.

This was not the first danger sign. Film director Nadia el Fani was threatened in May. There were other threats. The following month the group Lam Echami that brings together 80 associations supporting freedom of expression organised a series of events titled ‘Hands off Creative People’ to support artists targeted by Islamists.

A group stormed the screening of the film ‘Ni Allah Ni Maitre’ (Neither Allah Nor Master) at the Habib Belhedi cinema hall in Tunis Jun. 26, spraying “infidels” at the theatre with tear gas, and shouting, “Tunisia is an Islamic state”. Bowing to pressure, filmmaker el Fani changed the name of the film to ‘Laicite Inch’ Allah’ (Secularity, If Allah Wishes).

Fearing more violence with the start of Ramadan, the Muslim holy month of fasting, Sedrine says, “We have to reach agreement, even with the religious party Ennahda, that there will be no violence.”

Women have had successes they want to hold on to: half the candidates in the electoral lists must now be women. A strong presence of women in the constituent assembly could be crucial to women’s rights.

Women also want to consolidate the position taken by the High Commission charged to verify that the goals of the revolution are respected – namely that religion and politics will be kept separate. Ennahda has opposed this move in the transitional period. It has also opposed the transitional government’s decision that parties cannot receive funds from outside.

On another front women are fighting the undemocratic influence of former president Zine el Abidine Ben Ali in institutions such as the media. The media gives little space to women, even though they are politically active, and many will be candidates.

“After 23 years of dictatorship (Ben Ali was thrown out in the January revolution), the presence of old supporters of Ben Ali in key posts means there is no respect for the press,” Najiba Hamrouni, of the National Journalists Trade Union and chief editor of the Centre for Arab Women for Training and Research (Cawtayrat), told IPS.

Maya Jribi is general secretary of the Progressive Democratic Party, but the face of the party in the media is invariably former leader Nejib Chebbi, a male. The monthly magazine ‘Femmes & Realities’ carried a special report on women engaged in politics in its July issue. This is a women’s magazine, but it rarely publishes articles about women engaged in politics.

A group of women is now carrying out a project for monitoring the media.