UXBRIDGE, Canada, Sep 2 2011 (IPS) - With four times as many oil rigs pumping domestic oil today than eight years ago and declining domestic demand, the United States is awash in oil. 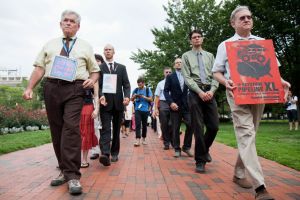 People from all over the U.S. walk to the White House to stage a sit-in. Credit: tarsandsaction/creative commons license

The country’s oil industry is primarily interested in who will pay the most on the global marketplace. They call that “energy security” when it suits, but in reality it is “oil company security” through maximising profits, say energy experts like Steve Kretzman of Oil Change International, an NGO that researches the links between oil, gas and coal companies and governments.

The only reason U.S. citizens may be forced to endure a risky, Canadian-owned oil pipeline called Keystone XL is so oil companies with billion-dollar profits can get the dirty oil from Canada’s tar sands down to the Gulf of Mexico to export to Europe, Latin America or Asia, according to a new report by Oil Change International released Wednesday.

“Keystone XL will not lessen U.S. dependence on foreign oil, but rather transport Canadian oil to American refineries for export to overseas markets,” concludes the report, titled “Exporting Energy Security”.

Little of the 700,000 to 800,000 barrels of tar sands oil pumped through the 2,400-kilometre, seven-billion-dollar Keystone XL will end up in U.S. gas tanks because the refineries on the Gulf Coast are all about expanding export markets. One huge refinery operator called Valero has been touting the potential export revenues of tar sands oil to investors, the report found.

Because Keystone XL crosses national borders, President Barack Obama has to issue a permit declaring the pipeline serves the “national interest” in order to be approved.

“The only way Keystone XL could be considered in the national interest is if you equate that with profits for the oil industry,” said Kretzman, who wrote the report.

Lieper recently said that without new pipelines “our greatest risk in Alberta is that by 2020 we will be landlocked in bitumen”. Bitumen is thick tarry oil from the tar sands that needs lots of high-energy and chemical processing to be useable – one reason it’s widely considered the world’s dirtiest oil.

The shortest route to the big Asian markets is through the Rocky Mountains to Canada’s west coast via the proposed Northern Gateway pipeline. However, Canadian native people live on some of the land and are staunchly opposed, so the industry thought it would be easier to put an export pipeline right through the U.S. heartland, said Kretzman.

“The oil industry would have done the Northern Gateway first but gambled that resistance to the pipeline would be far weaker in the mid-west,” he told IPS.

Thousands of people, including landowners and religious leaders, have gone to Washington DC in the past two weeks to tell President Obama to reject Keystone. Nearly 850 people have been arrested for standing on the sidewalk in front of the White House in what protesters call the largest civil disobedience in the history of the U.S. climate movement.

“It’s remarkable, a very dignified and moving protest much like the civil rights demonstrations in the 1960s,” said Maude Barlow, chairperson of the Council of Canadians, a large environmental NGO.

“This is about the rights of the environment and future generations. It is the blossoming of a new movement,” Barlow told IPS from Washington.

Other massive pipelines are being planned, including ones bringing tar sands crude to New England and the Great Lakes, she said. “Keystone is just the beginning. Once these are built they will have to put something in them.”

Infrastructure dictates policy, she stressed. Once pipelines, refineries or power plants are built, it is nearly impossible for governments to shut them down.

“We conclude that sources of the most threatening emissions have yet to built,” the scientists wrote.

The Obama administration knows this but the powerful oil lobby can use its unlimited funds to attack Democratic officials during the next election cycle if they don’t approve the pipeline, says Kretzman.

Changes to U.S. law in 2010 allow corporations to spend as much as they want on elections, and there is no sector with more money than the oil industry.

“That scares the hell out of the Obama administration,” he said.

It’s never been clearer that corporations wield the real power in the United States and Canada, activists say.

“This is the beginning of a very big fight for the future,” Barlow told IPS.

(*The story moved Sep. 2, 2011 contained an error in the first paragraph. The following sentence has been removed: “In fact the US exports more oil than it imports according to the U.S. Energy Information Administration — and has done so for nearly two decades.”)