/CORRECTION/*Q&A: “Brazil Could Mediate Between Juba and Khartoum”

RIO DE JANEIRO, Sep 20 2011 (IPS) - The world’s newest nation, South Sudan, is seeking support from Brazil – the first country in the world to recognise the new nation – in learning the art of diplomacy and defusing tensions and persistent conflicts. 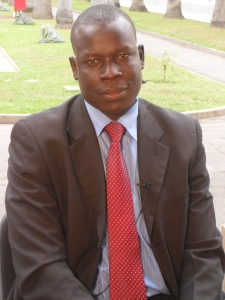 South Sudan plans to open an embassy in Brasilia in 2012, the first in South America.

Brazil could be a “trusted partner” to help the new country negotiate with Sudan to the north and learn “how to conduct diplomacy,” said James Padiet Angok, in charge of relations with South America in South Sudan’s recently created Ministry of Foreign Affairs and International Cooperation.

“Until now people don’t know that Brazil was the first country that established diplomatic relations with South Sudan, on the first day of our independence,” Angok said when he sat down with IPS for an interview during the Second Course for African Diplomats offered Sep. 12-23 by Brazil’s Foreign Ministry in Rio de Janeiro.

Q: How is the construction of the new country’s foreign policy going? A: Since the time of our independence on the 9th of July, we have started to sit down to try to design our foreign policy and also to determine in which countries we can open our embassies.

We are doing it in three phases: first, the countries where we will start this year, where the mission of South Sudan already had offices, about 21 countries. We started with the most representative such as the U.S., the UK, Canada, Australia, Kenya, Uganda and South Africa. Unfortunately we didn’t have any in South America, we only had offices in Europe, North America and Africa. Now we are just sending our ambassadors and diplomats to those offices that are already established.

The second phase is to add more embassies (up to a total of) 36; Brazil will be one of them, starting next year, 2012.

Then we will add more embassies in Europe, Asia and Africa. In Europe: in Switzerland, Holland and France; in Asia: in India, China, Malaysia, Japan and probably Indonesia.

Q: You are taking part in the Second Course for African Diplomats organised by Brazil’s Foreign Ministry in Rio de Janeiro. Why were you interested? What do you think Brazil can offer the countries of Africa? A: Three of us came to this course, one to give a lecture. We want to show Brazil our background, how we came to be an independent country. We are here…to learn from Brazil how they conduct their diplomacy, in which areas we can really cooperate with them. This course is very important for us.

One of the important things we can learn from Brazil is diplomacy in party politics; Brazil has succeeded in that. We want also to learn from Brazil the practical part of diplomacy, especially war and peace, in order to resolve problems using diplomacy rather than violence.

Q: Do you believe Brazil can help with your country’s diplomacy and foreign policy? A: We are trying to establish our diplomatic institute, we want to learn from Brazil how they translate their values in the training programme and then train their diplomats to lead Brazilian diplomacy in a professional way.

We are establishing a new institute, and we discovered that Brazil was one of the best when it comes to the practice of diplomacy, because Brazil manages the interests of the political parties (under the umbrella of) national diplomacy, it doesn’t take sides with any political party, and that is exactly what we want. So if there is any change of government or regime it doesn’t affect the diplomacy, which continues.

Q: Why learn from a developing country rather than looking for support from rich nations? A: We see Brazil as a developing country and the development gap between us and Brazil is not so wide. At least Brazil is humble towards us, we can learn from Brazil more than from the advanced countries who are sometimes very proud. We find Brazil very welcoming, especially to African countries.

Until now people don’t know that Brazil was the first country that established diplomatic relations with South Sudan, on the first day of our independence. This is very significant.

Q: You don’t see Brazil’s interest, and that of its companies, in Africa as an invasion or a kind of neo-imperialism? A: Brazil is totally different, it is a welcoming country and it doesn’t meddle in the affairs of other countries, it doesn’t dictate to other countries and doesn’t impose democracy by force.

These are some of the things that have attracted us to Brazil, the hospitality and the non-interference in the affairs of other countries. Brazil can only advise, they tell how they have done things, but they will not force you to do things, and this is the spirit we want really for us.

Q: Five decades of war before South Sudan became independent cost the lives of two million people. And the country is still facing internal tensions and conflicts. A: Nation building is a challenge. Sudan has been struggling to build a nation in this violent struggle it couldn’t resolve by diplomatic means. The result was separation, but the separation didn’t solve things, the internal problems remain both in the North and the South.

(We think we can find solutions by learning) the way of diplomacy from Brazil. We don’t need to rush into violence when there are differences. Yes we have a lot of tribal (conflicts over land distribution and) oil reserves. A lot of factors can easily draw us into violence, but the best way is how we can learn to resolve by dialogue and negotiation. So the challenges are still great for us; unity of our people is still very difficult.

We have 61 ethnic groups with 61 languages. We believe that in the new generation coming in the future we are going to overcome (the difficulties this poses). Ten years from now, the new generation which was not really involved in the war and violence will resolve differences in a more diplomatic manner. The generation we have now is traumatised because of the long wars.

Q: Independence was officially declared, but the borders between the North and the South have not been demarcated. How will this problem be worked out? Do you advocate “soft borders”, because of the movements of nomadic tribes? A: This border issue is one of the crucial post-independence issues pending between us and the North. The border with Sudan – about 2,000 km – is the longest border we have. It is a bit tricky because of the aspect of oil along the border, and also the tribal afflictions. When a country divides, if you don’t determine the borders, you won’t know which oil belongs (to which side). The soft border is tricky and it needs negotiation…to divide this oil in a fair manner.

If we just leave it like that without negotiation it can create conflicts. This is what we can learn from Brazil, how to negotiate this, and where Brazil could be of great help to us. We know Brazil doesn’t take sides easily.

We have this issue of the tribes which is connected to the days of the struggle. We have tribes on the border who have been struggling with the people of South Sudan against the regime in Khartoum (the capital of Sudan). But when we divided, by definition they belong to the North – but they feel uneasy and more identified with us in the South.

According to statistics from 2010, the population is 8.5 million in South Sudan, and in (the disputed territory of) Abyei we have like 600,000. The Abyei people originally are Dinka from the South, but by the CPA’s (2005 Comprehensive Peace Agreement) definition of the borders they belong to the North.

Now they were given the referendum to decide, but the referendum didn’t take place because it was difficult to determine who really should vote and that’s why we see violence in Abyei.

This didn’t take place so far (because of) the complications with the census. They didn’t accept the census, the people of Blue Nile and (the state of) Southern Kordofan rejected the census because they think it’s not their numbers.

So the census has to be redone and this delayed the popular consultations. Now it is apparent this issue becomes a bit critical because they think they belong to us in the South more than to the North. So now where do they belong to is the dilemma which they have.

This will need a lot of diplomacy, those are people who have had guns for more than 20 years. How do you tell them just to go home and lay down their arms. It is becoming difficult and results in violence, bombing and fighting.

Q: Is there a risk of a new civil war? A: Yes, the risk is real, but we in the South must control this risk because if we decide to respond today there will be war. But we decided that it is not time for us in the South to get involved in a war, there is no time for us to venture into the affairs of Sudan. We think that these issues should be resolved by diplomacy, not by war.

Q: What is the situation with regard to bringing basic services to the population? A: We have a big challenge in terms of food security. We don’t produce enough, so we import from Uganda, Kenya and Sudan itself, but these days Sudan has closed its border, so it is very difficult…there is no trade between us and Sudan now.

Most of the oil is in the South but the pipeline goes from the South to the refineries in the North. We decided that we should not close off the oil flow, trade is closed but the pipeline is still working because if we closed it we would have a problem in our budget, 99 percent of which comes from oil. So if the oil (flow is shut down), our budget drops to zero. We are thinking we can negotiate and have trade agreements so they can reopen and we get our food.

The oil goes from us in the South to the North to be refined, but we don’t get fuel from the North, so we get it from Ethiopia, Uganda and Kenya. And in Juba (the capital of South Sudan) we are having a crisis regarding fuel.

So far we are still depending on our neighbours. We think the North is an important neighbour for us and we need to negotiate. We think Brazil can help to negotiate and could be a trusted partner who could mediate in a neutral manner. This is the best way to do it.

*/Attention editors: This story corrects and expands the interviewee’s response in paragraphs 31 to 35 in the article moved earlier on Sep. 20, 2011./