BERLIN, Sep 27 2011 (IPS) - The possibility of exploiting the hitherto inaccessible natural resources of the Arctic Ocean is becoming increasingly tangible with the thawing of the North Pole, much to the alarm of European scientists. 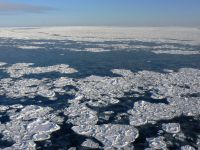 Recent measurements by the Alfred Wegener Institute for Polar and Marine Research (AWI) confirm that the melting of sea ice in the Arctic Ocean during the Northern hemisphere summer, a phenomenon observed for the last five years, was particularly pronounced this year.

Rising temperatures in the far north have reached the point that both the Northwest Passage along the northern coast of North America and the Northern Sea Route (also known as the Northeast Passage) along the coast of Siberia are free of ice.

“What is unusual about the summer of 2011 is that even the Parry Channel (in the Canadian territory of Nunavut) is open and almost ice-free,” Georg Heygster of the Environmental Physics Institute at the University of Bremen told Tierramérica. The institute has generated maps of the polar ice caps using data from NASA’s Aqua satellite.

“The ice is melting so rapidly around the edges that that sun’s rays are able to warm the water underneath, which speeds up the thawing of more ice floes,” explained Rüdiger Gerdes, a sea ice expert at the AWI, based in the city of Bremerhaven on the northwestern coast of Germany.

“This development does not surprise us, since it fits in with the trend observed since 2007,” he told Tierramérica. “But it is serious, because not only is the extent of the ice diminishing, but also the thickness,” he added.

“These circumstances create new opportunities for making commercial use of the Arctic,” in areas such as fishing, maritime shipping and the exploitation of natural resources, particularly oil and gas, observed Gerdes.

And these economic opportunities are already being pursued. Between July and September, three massive supertankers took advantage of this newly opened shortcut through the Arctic.

The Sanko Odyssey, the largest ship to travel along this route, was carrying 68,000 tons of iron ore. The supertanker Vladimir Tikhonov sailed from the island of Novaya Zemlya to the Bering Strait in seven and a half days, breaking the previous record set weeks earlier by another tanker, the STI Heritage, which traveled the same route in eight days.

According to figures from Russian maritime shipping authorities, around 20 vessels have used this route so far this year.

To evaluate the environmental consequences of these activities, Gerdes, Heygster and close to 30 other researchers from nine European countries have joined together for a new project called ACCESS: Arctic Climate Change, Economy and Society, which held its first workshop on Sep. 5 in Bremen.

Divided into five working groups, the researchers want to find answers to three key questions: What will transportation, tourism, fishery and resource exploitation in the Arctic be like in the future? What risks do these developments hold for nature and humanity? By means of which regulations can these risks be minimised?

In addition to the AWI, other partners in the ACCESS project are the Kiel Institute for the World Economy, also based in Germany, the German Aerospace Centre, and Pierre and Marie Curie University (UPMC) in France. Links have also been established with the intergovernmental Arctic Council and the Arctic Centre at the University of Lapland in Finland.

“Our main concern is the regulation of potential economic activities in the Arctic and the identification of Arctic governance options for European governments,” UPMC spokesperson Claire de Thoisy-Méchin told Tierramérica.

“Arctic climate change is going to have strong impacts on both marine ecosystems and human activities. In our work, we are going place particular emphasis on the environmental sustainability of these activities, in close cooperation with local indigenous peoples,” she added.

But shipbuilders and others involved in the maritime shipping sector stress that the effective use of Northwest Passage and the Northern Sea Route will require heavy investment in infrastructure such as ports and fuel and provisioning stations along a route stretching almost 6,000 kilometers.

Moreover, despite continued melting of Arctic sea ice, current conditions are still unpredictable. For example, in its recent passage through the Arctic, the Sanko Odyssey was accompanied by a Russian atomic-powered icebreaker.

“The main problem for maritime shipping in this northern region are drifting ice floes, which can occasionally lead to an enormous concentration of ice that even a ship as big as the Sanko Odyssey can’t move,” said Gerdes.

But the trend of increasingly greater melting is clear. Scientists estimate that by 2029, the Arctic Ocean will be completely ice-free in the summer.

Gerdes believes that the current thaw is also influenced by the so-called “Atlantic multidecadal oscillation”, a phenomenon that remains a source of scientific controversy, and is supposedly characterised by periodic changes in surface sea temperatures in the North Atlantic. “We are currently experiencing a warm phase of this oscillation,” said Gerdes.