SÃO GONÇALO, Brazil, Sep 1 2011 (IPS) - Almost a year and a half after floods wreaked havoc in a large part of the state of Rio de Janeiro, a group of women are struggling to rebuild their lives. They lost everything except their will to pick themselves up again and make the best of the aid they receive, to become self-sufficient again. 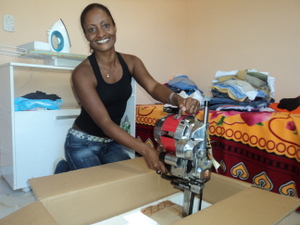 When Elisete dos Santos came home from work on the night of Apr. 5, 2010, the water was already up to her calves.

The storm had started in the morning and by four a.m. the following day the water had covered half of her house in Conjunto da Marinha, a “favela” or shantytown in the southwestern Brazilian city of São Gonçalo, some 40 kilometres across the bay from Rio de Janeiro.

“My main concern was how to get my kids out safely. My daughter almost drowned when we were getting out of there,” a teary-eyed dos Santos told IPS.

Thirty-nine-year-old dos Santos is a single mother with a 16-year-old teenage son and a 10-year-old daughter, and everything she owned had been obtained through hard work and enormous sacrifices. The minimum wage of 200 dollars a month she makes working as a saleswoman is not enough to live on so she supplements her income working from home making craft jewellery.

After she dropped her family off at a temporary shelter in a nearby church, she went back to her house to try to rescue some of their belongings – to find that the water had risen up to neck level.

She was able to salvage the national identity cards of all the members of the family, but many other seemingly insignificant objects that were just as much a part of their identity – family photos, cherished items and small mementos gathered over a lifetime – were irretrievably lost under the water and mud that covered her home. Also ruined were the tools and materials she used to make the earrings, bracelets and necklaces she sold.

“I was devastated. You work so hard and make great sacrifices, every step forward takes such a huge effort, only to lose it all in a day,” she told IPS, now settled in her new home.

“But material things can be recovered with time and life goes on. That’s what’s important. You can’t give up,” she said as she remembered how some of her neighbours were not as strong as she was and “gave in to depression.”

She was not a homeowner so the government did not consider her eligible for rental assistance as a flood victim. Still, she managed to rent another makeshift dwelling, though she struggles every month to come up with the payments.

She had better luck on the job front, however, as the Brazilian chapter of the international humanitarian organisation CARE has donated two machine tools for her work: a welding machine and a grinder, both essential for her craft making.

“I sell costume jewellery to stores and sometimes in street markets and the money I make helps me pay the rent. I also use that money to buy food for my kids: rice, beans, milk, that sort of thing,” she said.

In this city alone, CARE helps 114 women who work on their own as craft makers, seamstresses, manicurists and cooks and who lost everything to the floods.

Their greatest loss was “their production capacity, the equipment and raw materials necessary for their work and to support their families,” Leila Menezes, head of Care Brazil’s Climate Change and Disaster Response Programme, told IPS.

CARE chose São Gonçalo under their aid programme for women victims of natural disasters because it is the second poorest city in Brazil and has one of the highest rates of violence.

In 2010, flooding from swollen rivers and landslides affected some 10,000 families in this city of almost one million people. A total of 473 people died in the state of Rio de Janeiro and the material losses were incalculable, as a result of the worst flooding the state had seen in 46 years.

Oceanographer David Zee attributed the unusually high rainfall to climate change, which he said was compounded by local causes, such as slope soil erosion due to deforestation, irregular riverside settlements and uncontrolled urban sprawl.

In São Gonçalo these causes were further aggravated by its lowland location and a historical lack of public spending on low-income housing, stormwater drainage systems and garbage collection services.

While the municipal, regional and federal governments are now trying to make up for lost time, Rosemere Souto, another flood victim who lives in the Salgueiro favela, is taking matters into her own hands to help her community.

“I try to explain to them (the neighbours) that if you dump your garbage into the river, it’s going to make the river overflow. But a lot of people just don’t understand,” Souto, who received an industrial sewing machine from CARE, told IPS.

As a member of the women’s group Las Mujeres de Salgueiro, she is determined to achieve two goals: boost her income and raise environmental awareness.

With her new sewing machine she plans to make accessories with tilapia fish skin. Tilapia is a fresh and salt water fish that is very common in the area, so the raw material for her crafts is obtained at low cost from local small-scale fishers. The skin used to be discarded and dumped into the river, where it took five years to decompose. This way, Souto not only helps herself and her family, she protects the environment.

“The floods really did me in. I was broke,” Souto says. But according to this 48-year-old mother and grandmother married to a shipyard worker, “the best thing to do in those cases is work even harder and help others with words, raising awareness about our planet.”

Menezes said that when environmental disasters strike, poor women are the most vulnerable group.

Which is why in its efforts to combat poverty and rebuild the local economy, CARE focuses particularly on women, because they are usually “mothers, who contribute significantly to supporting their families with their small-scale ventures,” she added.

Menezes, a psychologist who specialises in socio-environmental conflict resolution, stressed that when these women “have access to the resources they need, their families are more likely to get back on their feet.”

Supporting the economic recovery and resilience of the victims of natural disasters is the kind of response that makes it possible “to transform their living conditions, because it promotes local economies and social development and contributes to fighting poverty,” she added.

As of 2007, Brazil’s Department of Women’s Policies (SPM) has prioritised “sustainable development with a gender and environmental justice approach” as one of its key policy issues, and seeks to mainstream this concept throughout the initiatives implemented by the various ministries.

SPM head Iriny Lopes told IPS that women are most vulnerable to environmental disasters, among other reasons, “because of their role as caregivers of children, the elderly and the sick.

“Any change that affects water sources or access to water, for example, will have a direct impact on the lives of women, as they will have to work double hard to ensure their family’s care,” she said in an email response.

She also underlined other factors that contribute to their vulnerability: women have to juggle their domestic responsibilities with their remunerated jobs where, moreover, they are usually paid less than men and have worse working conditions.

Souto knows these difficulties only too well, and now that she has become an environmental activist she is eager to teach other women “to fish and not just receive the fish.”

“Because the food we receive in aid soon runs out. But with a work tool you can have everything,” she said smiling as she proudly showed off her brand-new industrial sewing machine, which she will “use to stitch the fish skin.”