TORONTO, Sep 16 2011 (IPS) - Bolstered by gold prices hovering above 1,800 dollars an ounce and a global economy slowly recovering, exploration activity for the precious metal in 2010 once again rebounded. Yet, with this surge comes the attendant scrutiny by activists, investors, and the media into the industry’s human rights and environmental records abroad. 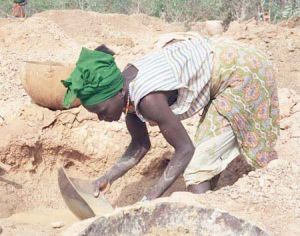 A woman working in a gold mine in Siguiri Prefecture, Guinea. Credit: USAID

For Canada, there is much at stake under the uncomfortable gaze of mining watchdogs. The country accounts for more than 75 percent of the world’s mining and exploration company headquarters, with about 130 billion dollars worth of investment predicted over the next five years for the Canadian mining sector, according to recent industry figures.

Under an intensifying spotlight, a large majority of Canadian firms have opted for Corporate Social Responsibility (CSR) programmes, according to a 2009 report issued by the Canadian Centre for the Study of Resource Conflict commissioned by the Prospectors and Developers Association of Canada.

U.K. academics have defined CSR as the responsibility of companies for their impact on society and the environment, and for the behaviour of those with whom they do business, the report states.

The mining sector has typically favoured the development of current efforts rather than the addition of more legislation.

Last year, the Canadian parliament defeated a bill that would give Ottawa the right to look into human rights or environmental claims against Canadian mining firms working internationally.

Instead, Ottawa convened roundtables on corporate social responsibility a few years ago and unveiled a strategy in 2009 underpinned by the creation of a CSR centre of excellence and an extractive sector counselor position, according to a Mining Association of Canada report published last year.

International organisations like the United Nations also have CSR initiatives, the report notes.


Some mining interests take “very seriously” their social responsibilities and respect for human rights, noted Chris Albin- Lackey, a senior researcher in the business and human rights programme of New York-based Human Rights Watch, while others are “more lax”.

Non-governmental organisations like MiningWatch Canada dismiss “a lot of CSR as mostly PR”.

What has been troublesome is the lack of “significant gains” on key issues like free prior, informed consent for local communities; companies lobbying hard against greater revenue sharing, fair taxation and royalty distribution with overseas governments; and mining outfits operating in areas marked by weak rules and environmental monitoring, said Moore.

Without a history of mining in a particular region, it is not surprising that residents may view the activity as “controversial”, conceded Peter Sinclair of Toronto-based Barrick Gold Corp.

This is why Barrick participates in discussions with local groups, door-to-door campaigns and distribution of newsletters, and offers websites, hotlines and other mechanisms to bring community concerns to the table, said Sinclair, the company’s vice president of corporate social responsibility. Barrick also works overseas with NGOs like World Vision and CARE International.

For Barrick, taxes and royalties are a “huge part” of its contributions to foreign governments and can fund a nation’s civil service and social development, Sinclair told IPS.

He said the mining firm offers construction and operations jobs (including 9,000 positions in the Dominican Republic as the “single-biggest employer”), training, and spin-off benefits from the purchase of many local items like uniforms to the use of domestic bus services.

He added that only a handful of Barrick mines operate for fewer than 20 years. Moreover, said Sinclair, the company strives to identify community needs like water, educational facilities, health care and transportation infrastructure.

Despite these social and economic investments, mine operators still encounter their share of international roadblocks.

In one noteworthy case, a northern community in El Salvador has battled Pacific Rim Mining Corp. of Vancouver in a bid to make the Central American nation the first to ban mining. In this region, an anti-mining community leader was tortured and assassinated in June 2009.

A few months ago, a student involved in the environmental campaign and last seen “distributing fliers against metallic mining” was shot, according to an August article written by Washington, D.C.-based Robin Broad, a professor at American University, and John Cavanagh, the director of the Institute for Policy Studies.

They both conducted research in El Salvador this year. El Salvador’s attorney general, who does not belong to the same leftwing political party as the president, has been unwilling to investigate these murders, Broad told IPS.

Residents living near mine exploration activities in the northern Salvadoran province of Cabañas complained of “reduced access to water, polluted waters, impacts to agriculture, and health issues”, not to mention that the El Dorado mine would operate for only six years and that many locals were not skilled enough to obtain many of the “promised jobs”, wrote Broad and Cavanagh.

The Salvadoran community also consulted water experts and residents of neighbouring countries living near mine sites, state the authors.

Pacific Rim shot back against criticism leveled by activists and academics, however. The company, through its U.S. and Salvadoran subsidiaries, has three gold projects in the country but shut down all exploration in El Salvador in July 2008 when “it became apparent that the government was deliberately stalling our application for an environmental permit for the El Dorado property,” Barbara Henderson, the vice president of investor relations and the corporate secretary, told IPS in an e-mail.

Besides the “heavy hit” Pacific Rim was forced to take due to anti- mining sentiments, more than 300 Salvadorans were left jobless, Henderson wrote.

“Contrary to the claims of a small but very vocal minority, the vast majority of people in and around the El Dorado site are in favour of the mine proceeding and the jobs this will bring.”

She dismissed the environmental fears regarding the mining operation for failing to “hold up against the facts of the mine plan” – not to mention, in many cases, being scientifically impossible – and indicated that Pacific Rim “held dozens of community meetings” to explain the environmental implications and is still willing to have discussions.

In another instance, Barrick’s Porgera mine in Papua New Guinea was criticised in a Human Rights Watch report released in February. The cases, which stem back to accusations made in the 2009-2010 time frame, involved allegations of gang rape and other forms of violence by Papua New Guinean security guards working for the mining giant, HRW researcher Albin-Lackey told IPS.

Barrick’s internal investigation concluded the claims were legitimate and in fact unearthed additional allegations, which resulted in a number of arrests, he said.

Being unaware of the human rights violations taking place at the mine was “quite a wake-up call” for Barrick to strengthen its monitoring mechanisms and the channels through which community members can raise concerns, said Sinclair, the company’s CSR chief.

“It’s something we’ve done quite a bit of work on,” he said, including adopting a new global policy concerning this issue and seeking “external help” to deal with the matter.

Still, some activists argue that corporate social responsibility policies can go only so far. For instance, communities still lack recourse to deal with water contamination or persecution for vocalising their rights, MiningWatch’s Moore noted. She said Canadian embassies abroad should be equally responsive to local complaints of human rights violations as to Canadian corporate lobbying of foreign governments.

At the heart of the matter is Ottawa’s reluctance to adequately regulate the mining industry, which leaves companies “to their own devices” regarding the appropriate international commitment to the environment and local communities, said researcher Albin-Lackey.

In many cases, foreign governments approving mining activities are either too weak to uphold their responsibilities or are “actively disinterested in doing so”, he said, explaining that this is why the Canadian government must “step in to fill the gap”.