WASHINGTON, Sep 20 2011 (IPS) - As leaders from two of the world’s largest financial institutions, the World Bank and International Monetary Fund, met for annual meetings here Tuesday, a delegation of activists from India called on the World Bank to follow through with its proposal to dramatically cut funding for coal-burning power stations. 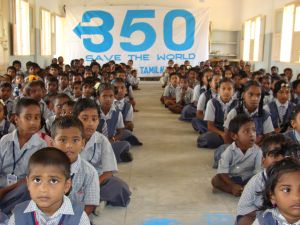 Over the next few days, the delegation will travel from Washington to West Virginia where, in the heart of the Appalachian Mountains, activists from India will meet with local community members in that state who oppose a form of high-impact surface strip mining called mountaintop removal.

As part of its journey, the delegation will visit Kayford Mountain, Blair, Fayette County, and Charleston, West Virginia.

In a ray of hope for activists, the World Bank issued a new draft energy policy earlier this year that would, if approved, dramatically cut funding for coal projects. If the World Bank, which has given billions of dollars in funding to coal development projects in the past, pulls funding for coal, the move could have a ripple effect.

Growth in India, much like China, is fueling an “insatiable” demand for energy, said Shikha Bhatnagar, associate director of the South Asia Center at the Atlantic Council.

The Atlantic Council sponsored a panel session Tuesday, along with the Sierra Club and the Bank Information Center (BIC), a World Bank monitoring group, to discuss India’s energy future and the challenges posed by what coal critics describe as the country’s intensifying coal bender.

According to the Sierra Club, India approved 150 new coal-fired power plants last year alone and has plans to increase its countrywide coal-fired power 600 percent over the next two decades.

But Ron Somers, president of the U.S.-India Business Council, said India was inefficiently mining coal, forcing it to import from Indonesia, Australia, and South Africa. Meanwhile, he said, India is experiencing a growing demand for energy from a population of 1.2 billion, 54 percent under the age of 25.

He said that while Indians consume 700 kilowatt hours per person per year compared to the average U.S. resident’s 14,000, there is nevertheless a growing demand for energy, as well as for new technologies such as cellular phones, 10 million of which are sold every month in India.

“If you can jump that far in telecommunications, can we not leapfrog out of coal power?” Somers said. “At some point to the government is going to say ‘this is not sustainable’.”

Coal critics also say coal mining and burning projects have immeasurable costs for the communities and ecosystems that bear the brunt of the environmental impact, from India to the U.S.

“There is not a single country that has not increased its GDP quite a lot without increasing pollution quite a lot,” said Soumya Dutta, a member of the India People’s Science Forum, based in New Delhi.

In 2009, mountaintop removal coal mining had destroyed 352,000 acres and 135 mountains in West Virgina alone, according to study commissioned by Appalachian Voices. Civil society activists from communities facing environmental effects of coal mining, both in West Virginia and India, have called for halts to projects they say destroy quality of life, damage water sources, and irreparably alter landscapes.

Vaishali Patil, a delegation member and activist from the Konkan Coast region of Maharashtra, Gujarat, India, has organised local youth and community groups in her region to oppose new coal development projects. Her organisation is called “Ankur”, which in Hindi means “seedling”.

“There is tremendous unrest,” Patil said, referring to the impact of the projects on her community.

The projects in Gujarat, according to a new report “Coal Narratives: Voices from the Front Lines of the Global Struggle”, published by the Sierra Club, have been accompanied by a “violent onslaught of land acquisition, displacement, corruption, and intimidation”.

Patil said that the biodiversity hotspot where she lives is facing the prospect of many more environmentally high-impact energy projects, including 56 sanctioned iron-ore mining operations, slated for the Western Ghatt Mountains, and 19 proposed coal thermal and nuclear power stations.

Patil said she was looking forward to her trip to West Virginia to meet with U.S activists.

“I am looking forward to seeing what the civil society advocacy strategies are here,” Patil told IPS. “I want to learn from them, to share our struggle for community rights, for the right to natural resources, to save the land and sea – we feel this struggle is for our survival.”

On Sep. 24, the Indian delegation and U.S mountaintop removal activists will take part in “Moving Planet” day, a global day of action organised by civil society groups and supporters of fossil fuel-alternative energy, together in West Virginia. Events are also planned in India.