PENLYNE CASTLE, Sep 12 2011 (IPS) - Jamaica’s Blue Mountains are coffee country. Here, up among the clouds, farmers produce one of the world’s most exclusive brands of boutique coffees. 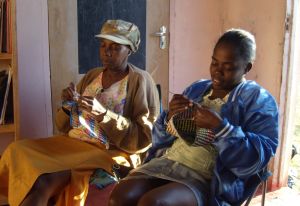 Kadian Edwards and Lucille Taylor meet to teach each other new stitches, and discuss marketing and other plans. Credit: Zadie Neufville/IPS

But low prices, economic hardships, back-to-back hurricanes and the loss of crop insurance have devastated some farms and put many out of the coffee business.

Both men and women now scramble for the few dollars to be made by planting scallions, thyme and assorted vegetables year-round. Many of these proud former coffee farmers are competing with householders, who with support from a United Nations-sponsored project, produce and sell vegetables in large quantities, as well as with traditional vegetable and spice farmers.

A small group of women believe they have found a way out of the crisis, and hope the Blue Mountains will also become known for their new product – Eco Weave bags and purses. The women make colourful and fashionable baskets, handbags and purses from discarded plastic shopping bags – dubbed scandal bags “because they are so noisy and so thin everybody can see what you buy”.

Since 1737, when Jamaica first exported 37,800 kilogrammes of coffee, Blue Mountain farmers have practiced a labour-intensive type of agriculture to protect the sensitive, steep slopes and chasms of one of the Caribbean’s largest conservation areas – the Blue and John Crow Mountains National Park.

An estimated 7,000 farmers cultivate 5,261 hectares of coffee in the Blue Mountains. Ninety percent are small farmers working on plots of less than two hectares, and about 40 percent are women.

In good times, farmers received a fixed price of 12 dollars per pound for the green beans. But an over-reliance on the Japanese market resulted in what former agriculture minister Christopher Tufton describes as Blue Mountain Coffee’s “greatest marketing challenge in recent times”.

Rocked by economic turmoil, the Japanese no longer want the entire Blue Mountain crop. They no longer make advance payments for the coffee, which is sold for 50 dollars per pound when roasted. Now, farmers get on average 2.45 dollars per pound for green beans.

Hardest hit are women. It is they who tend the coffee crop from seedlings to fully-grown trees – planting, fertilising and reaping the red berries. Women like eco-weavers Kadian Edwards Brown and her mother Angella own coffee farms but are also members of the female- dominated labour force in this coffee-growing area.

Like their menfolk, they are unable to afford the cost of fertilisers and other chemicals needed to resuscitate their weather-ravaged farms. And as the factories closed, the women lost their other sources of income as buyers, labourers, factory workers and coffee pickers.

Despite the prestige and the high price the Blue Mountain Coffee fetches on the international market, the communities here are the least developed on this northern Caribbean island. The roughly 1,500 families living in the six communities that make up the primary coffee-growing area have no public transportation and only basic healthcare.

The roads are rough, uneven and unpaved, their surfaces eroded by seasonal rains and frequent hostile weather. And despite an abundance of streams and the presence of the Negro and Yallahs Rivers, which maroon the communities during the rainy season, crumbling infrastructure keeps water pipes dry, forcing residents to carry water on their heads for daily use.

To overcome the challenges posed by terrible roads and the resulting high transportation costs, the women operate in two groups: one group of about 10 women in the Hagley Gap and a second smaller group of six in Penlyne Castle.

They meet one day each week at a church in Hagley Gap and at the small community health centre in Penlyne Castle. They have dubbed their craft eco-weaving because as they point out, since they started working with the bags some six years ago, plastic bags no longer clog the culverts and cause flooding whenever it rains.

“It is our contribution to the environment and I can earn anywhere from 15 to 50 dollars U.S. depending on the size, colours and styles,” said Kadian Edwards as she carefully cut and rolled the strips of plastic onto a stick. When that is completed, she crochets the strips of coloured bags into various styles and shapes.

Edwards, a married mother of two small girls, is a member of the Blue Diamond Group that targets the tourist and high-end markets.

“People say my bags are too expensive but depending on the size it takes me two to three days to complete them,” she explained.

Others, like Diana Williams Spaulding and members of the Hagley Gap group, target the lower end of the market. Williams Spaulding uses larger crochet hooks and takes less time to make the bags, which she sells for “whatever she can get”.

The 48-year-old makes bags to help support the surviving eight of her 14 children. She also cultivates 10 acres of bananas, plantains, potatoes, peas and three acres of coffee.

“When I tried the plastic and saw that it could work I stopped buying cotton because most times things were really bad and I couldn’t afford the cotton for crocheting,” she said.

Jefferson later started the Blue Mountain Project (BMP) – a U.S. registered charity that, among other things, helps the women through frequent bag-collection drives in U.S. colleges and by helping to find new markets.

Lucille Taylor, a single mother from Penlyne Castle, and Williams Spaulding are the stylists. They see new things, adapt them for the delicate plastic, and teach the new styles to the other women.

But whilst the women have high hopes for their venture, they are hampered by a lack of markets. Most complain that hoteliers and shop owners in the tourist markets fail to appreciate their time and effort.

“Most only want to pay about 600 (Jamaican dollars) or just under U.S. seven dollars for each large bag,” Edwards said frowning. “We have to collect the plastic bags, clean them and crochet the bags and baskets.”

Almost a year ago, with the help of the BMP, the women received a small grant from Jamaica’s Grace Kennedy Foundation to assist them with marketing. Another, Pan Caribbean, is helping them to collect used shopping bags.

Even as the women of the Blue Mountain work hard to make their eco- weaving a success, some fear that without help, it will simply fade away like the coffee market they once depended on.