MONTEVIDEO, Sep 14 2011 (IPS) - A method to revolutionise gold mining; biofuel from used cooking oil; a container where garbage and wastewater go in and four useful products and zero waste come out: Latin American science applied to the environment. 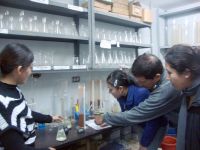 Peruvian metallurgical engineer Carlos Villachica has devoted his life to seeking a balance between his country’s two greatest riches: the mineral deposits concentrated in the Andes mountains and Amazon basin, and its huge wealth of flora and fauna.

Villachica has invested 42 of his 62 years in research. His latest innovation is the “ecological gold” method for small mining, which makes it possible to extract fine gold without a drop of toxic mercury.

More than 250,000 families earn their livelihoods from small-scale gold mining in Peru, and most of them use mercury to recover gold from black sand, a mix of gravel, rock, sand and various minerals found in numerous Amazon basin rivers, such as those in the environmentally degraded region of Madre de Dios in southeastern Peru.

Villachica’s method separates fine gold from the other minerals by spinning the black sand in a device similar to a blender with water, a few drops of alcohol and phosphate.

Inside the “blender” – a mechanical adaptor used in mining, specially fitted out for the project – the alcohol and air create small bubbles to which the fine gold flakes adhere because of the presence of phosphate.

As a result, the gold floats to the surface of the mixture and is ready to be smelted.

This makes it possible to extract the gold without the mercury normally used by small-scale miners for this purpose. As well as preventing the river and soil contamination and health risks associated with the use of mercury, this innovative method is faster and recovers more gold than the traditional method.

“We have mega biodiversity that needs to be protected and is more important than the minerals we have. And that is why more innovative technology must be created,” Villachica told Tierramérica.

The method, presented with an award in June by the governmental Science and Technology Programme, does not depend solely on Villachica. His three daughters have taken the baton and are now working alongside their father to carry the project forward: Joyce, a chemical engineer, Leslye, a metallurgical engineer, and Eileen, an environmental engineer.

“The challenge lies in defending the ideas and demonstrating that they can be put into practice,” Leslye Villachica, 31, told Tierramérica.

Four small-scale miners are already using the Villachica family’s invention in Madre de Dios. The next step planned by the Villachicas is a project they will undertake in partnership with indigenous Amazon communities.

Tests have been conducted and contacts have been made with buyers in France and Switzerland who are willing to pay 15 percent over the market price for every ounce of gold recovered through this method.

According to Villachica, the technology could also be applied on a wide scale if the government agreed to promote it. By 2016, the amount of mercury used by small-scale miners could be reduced by as much as 80 percent, he estimates.

The method is also much more profitable in the medium and long term. A small-scale miner spends between 200 and 300 dollars a month on mercury to obtain two to three kilograms of gold. Villachica’s machine for this volume of production might cost 4,000 dollars, which means the investment would be recouped in around 10 months.

Moreover, several miners could share the device, as will soon be done by an Amazon rainforest community.

In the meantime, for a medium-sized mining operation that spends 600 dollars a month on mercury, the machine would cost 12,000 dollars, and would therefore pay for itself in savings on mercury alone in less than two years.

Clean fuel – from the frying pan

A catalyst that converts used cooking oil into non-polluting biofuel is the brainchild of young Brazilian chemist Leandro Alves de Sousa. He initiated his research while working on his Master’s degree, and today, at the age of 28, he has already received numerous awards and offers from large companies interested in his discovery.

The big difference between this fuel and regular biodiesel is that it does not require the addition of gasoline to be used in motor vehicle engines, stressed De Sousa, who is currently enrolled in a PhD programme at the Alberto Luiz Coimbra Institute of Post-Graduate Studies and Research in Chemical Engineering at the Federal University of Rio de Janeiro.

“No matter how small the amount, using fossil fuels generates some amount of carbon dioxide that is emitted without an offset, and will contribute to aggravating global warming,” he commented to Tierramérica.

“When the raw material is totally plant-based, the circle is complete,” since the sum total of the carbon dioxide released is equivalent to the capacity for carbon absorption of the plants from which the oil was obtained, he explained.

The used cooking oil is hydrotreated using molybdenum carbide as a catalyst. De Sousa described it as “a sort of powder added to the raw material to convert it into another substance.”

“In addition to reusing the oil, we also avoid the conflict over whether farmers should be growing crops for food or for energy, since the same crop will be used first for food and later for fuel,” he noted.

De Sousa’s method also solves the problem of a biodiesel refining byproduct that is difficult to sell and whose uncontrolled accumulation can cause environmental problems: glycerol. “With the system I created, the only byproduct is water,” he said.

As his research continues, “the results of new studies will clarify the feasibility of this method for large-scale implementation,” he added.

From wastewater to zero waste

What began as a design to recycle water in a Mexican home has become a method to turn waste into a source of fertiliser and fuel.

Jesús Arias, 67, a Mexican physicist and mathematician by profession and environmentalist at heart, wanted to reuse the water from his house, which he built together with his brother in 1969 in the community of San Vicente Chimalhuacán, 65 kilometers southeast of Mexico City.

“It started out as a social initiative. In 1970 I modified a septic tank, and that was how I built the first biodigester for wastewater,” Arias told Tierramérica. The project eventually gave rise to the Xochicalli Foundation (whose name means “house of flowers” in the Nahuatl language).

That first biodigester has since developed into a unified system for the treatment and recycling of solid and liquid wastes.

Organic matter such as animal excrement and wastewater are placed inside a hermetically sealed and impermeable container known as an anaerobic digester.

The system encompasses a device to capture and store biogas (methane produced by the breakdown of organic matter), stone traps to capture grease, and chambers with biological and biophysical filters to separate fertiliser.

This results in four products: biogas, an alternative fuel source; the sediment, which can be used as fertiliser as well as raw material for animal feed; a surface scum which keeps the soil nourished and healthy; and the leftover liquid that can be used for irrigation, washing and even drinking if it is purified using the electricity generated by the methane.

According to the Ministry of the Environment, Mexico produces around 38 million tons of waste annually, half of it organic, and only recycles 13 million tons. Of the more than 400,000 liters of household and industry wastewater produced every second, only 83,000 liters are treated.

To treat 100 liters of wastewater per second, Arias’ method requires a 65-kilowatt electricity source and a 6,000-square-meter area of land, at a cost of around four cents per cubic meter, less than a traditional water treatment plant.

As in the case of Villachica in Peru, Arias’ children, Margarita and José de Jesús, are both engineers and are now in charge of keeping the project running.

Arias has designed more than 200 projects in Mexico and abroad.

Now the plan is “to link it with a sustainable community to encompass water, nutrients, energy and decontamination,” said Arias.

* With reporting by Milagros Salazar in Lima, Emilio Godoy in Mexico City and Alice Marcondes in São Paulo. This story was originally published by Latin American newspapers that are part of the Tierramérica network. Tierramérica is a specialised news service produced by IPS with the backing of the United Nations Development Programme, United Nations Environment Programme and the World Bank.