PESHAWAR, Sep 11 2011 (IPS) - The United States-led war-on terror, unleashed on Afghanistan in the wake of the 9/11 attacks, has utterly destabilised the neighbouring Pashtun-dominated tribal areas of Pakistan and reduced them to a state of utter lawlessness. 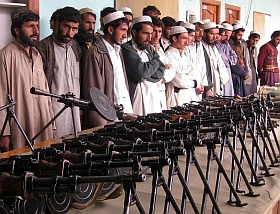 Taliban who surrendered with their weapons to the Pakistan army in August. Credit: Ashfaq Yusufzai/IPS

For a start, the Federally Administered Tribal Areas (FATA) and the adjacent province of Khyber Paktunkhwa, of which Peshawar is capital, are now awash with small arms, with every household owning at least one of the iconic AK-47 rifles.

“Weapons manufactured in the FATA or smuggled in from Afghanistan have flooded the entire country and resulted in endless bloodshed all the way to Karachi,” says Naveed Shinwari, chief of the Community Appraisal Motivation Programme (CAMP), which campaigns against small arms proliferation.

Shinwari says the fact that every household in the FATA possesses firearms means that they are used to settle even petty issues, resulting in a large number of avoidable deaths and injuries.

“The situation here before 9/11 was peaceful, but over the past five years 35,000 civilians and 3,000 soldiers have died with bombings, shootings and suicide attacks becoming the order of the day,” says Mian Iftikhar Husain, information minister in Khyber Pakhtunkhwa.

As U.S. and NATO forces invaded Taliban-ruled Afghanistan in 2001, the leaders of the ‘Islamic scholars’ and the international Al-Qaeda fled over the border into Pakistan’s FATA and lost little time in extending their activities to adjacent Khyber Pakhtunkhwa.

“About 200,000 of FATA’s eight million people live in camps due to the military operations there. Of the seven tribal agencies of FATA, military action is in progress in six, making the lives of the residents miserable,” Husain told IPS in an interview.

Of the 52,000 students enrolled at the University of Peshawar, 10,000 are from FATA and who now find it unable to visit their native towns and villages.

“We are unable to go home because the roads are closed as a result of the military operations there,” said Zawar Hussain, a final-year student from FATA’s Kurram Agency, once a popular tourist destination.

Thousands of students who had ventured to their hometowns in FATA for the Ramadan season and the festival of Id-ul-Fitr on Aug. 28 are stranded, waiting for the security situation to improve so they can travel back to Peshawar and resume studies. “Since 2005, the militants have forcibly closed down about 800 schools, leaving thousands of girls and boys unable to attend classes in a territory where the literacy rate is less than 43 percent,” said Omar Ali, a senior FATA education official.

Ali said the parents are extremely concerned about the future of their children and those who can afford it were migrating outside FATA in order to ensure that their children get an education.

An estimated 400 public health centres in the FATA and Khyber Pakhtunkhwa have been destroyed by militants as part of their campaign of sabotage, targeting government installations.

“The majority of FATA residents now travel to Peshawar and other safer cities to seek treatment even for minor ailments,” said FATA’s director of health Fawad Khan.

Khan said that before the militancy started up FATA had a good health infrastructure with an average of 250,000 patients examined and about 29,000 operated upon each year.

Khan said that doctors, nurses and paramedics are now afraid to go to work because of the rising incidents of violence.

Former secretary for security in the FATA, Brig. (retd.) Mahmood Shah, told IPS that Pakistan has paid heavily in monetary and human terms through the war against the Taliban. “The government needs to scale up military operations and kill all the miscreants to provide peace to the residents there,” he said.

“The Taliban want to enforce their own brand of Islam. The government can defeat them with the public support which it is getting now,” said Shah. “The fight against terrorists must continue till their elimination for the safety of our people, our country and our region,” he said. “After Osama bin Laden’s assassination, the wave of terrorist strikes has increased as the Taliban are now targeting mosques and market places in an effort to kill as many people as possible,” said Afrasiab Khattak, senator and president of the Awami National Party that rules Khyber Pakhtunkhwa.

Khattak told IPS that all the players involved in the tribal areas, including Pakistan, the U.S. and Afghanistan, should “give up their dual policies if they are sincere about resolving the imbroglio in the region.” Pakistan, Khattak said, should revisit its policy on the “war-on-terror” because the country has paid a heavy price for “flawed policies” that pandered to the military interests of the U.S.

“We totally reject the U.S. notion of good and bad Taliban. All are animals. They don’t have any respect for humanity,” Khattak said. “A vigorous military operation in FATA is extremely important to kill the terrorists based there since one decade.

“We have long been asking the U.S. and NATO to leave Afghanistan and let the people decide about their future,” Khattak said.