MONTREAL, Canada, Sep 12 2011 (IPS) - Durban should not be the burial ground for the Kyoto Protocol, says Kumi Naidoo, Executive Director of Greenpeace International, about his expectations from the 17th United Nations Framework Convention on Climate Change happening in his hometown in South Africa later this year. 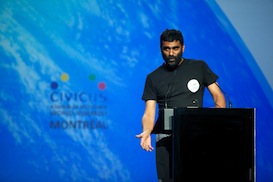 Kumi Naidoo, Executive Director of Greenpeace International, said Africa will be looking to a binding treaty at COP 17. Credit: CIVICUS

For Naidoo, a former anti-apartheid activist who assumed Greenpeace‘s helm in 2009, a legally binding treaty, support for Africa’s women farmers and protection for the continent’s forests are among his wish list for COP 17, which may decide the the Kyoto Protocol‘s fate. The protocol, which expires in 2012, sets binding targets for 37 industrialised countries and the European community to reduce greenhouse gas emissions.

South Africa has been holding talks with African ministers in order to present a united front at the international meeting in late November.

Speaking to IPS at the 2011 CIVICUS World Assembly, Naidoo said that while Africa will also be looking to a binding treaty, it will also be keen on clarifying how issues on climate change adaptation and mitigation will be dealt with.

Q: What are the chances that we will see a legally binding treaty come out of COP 17? A: The track record on compliance in regard to U.N. summits is so paltry it’s pathetic. We need to have a fair, ambitions and binding treaty. By fair, we mean that it should give expression to a common and differentiated responsibility, which takes into account that developed nations bear the culpability in terms of the crises we find ourselves in. That should reflect itself with rich nations being willing to pay their climate debt to support poor countries to be able to adapt and mitigate the impacts of catastrophic climate change.

We need the level of ambition that is equal to what the science says we need. The science tells us that developed nations need to be looking at between 25 and 40 percent in terms of emission targets and very few countries are close to that.

Given the position of the United States, and the fact that countries like Russia, Canada and Japan are trying to kill the Kyoto Treaty – I think the stars are not aligned to get a legally binding treaty. What we need to do then is get as close to the legally binding treaty as we can. If the United States is the only blocking nation, we need to find a way in which we can move ahead with pressure being brought on the U.S. to develop national legislation to provide equivalents to the commitments being made by other nations so that we get on with the serious task of acting, not just negotiating.

Africa is very keen on making sure Kyoto survives; we want the second commitment period agreed to. Durban should not be the burial ground for Kyoto. If it collapses, my sense is that the whole United Nations Framework Convention on Climate Change will collapse.

Q: Previous COP meetings have led to the creation of the Green Climate Fund to support mitigation, adaptation, technology and capacity building in order to respond to climate change. The decision to place the fund within the World Bank has been controversial, what are other ways the fund could be managed? A: There is a tension from (last year’s COP 16) in Cancun about the role the World Bank will play in the fund. The compromise is that the World Bank (WB) will start the fund and eventually it will evolve outside of the bank. I think many African countries, based on their experience with WB funding mechanisms, have a lot of reservations about that and that’s totally understandable and it’s shared by civil society largely.

There is a range of other possible mechanisms…and a body of experience now with HIV funding, like the Global Fund to Fight HIV, Tuberculosis and Malaria and other vertical funds. It’s not rocket science.

Q: Where would you like to see money from the fund go? A: We know that African women farmers are in the overwhelming majority among farmers on the continent and that they have not been supported with seeds, fertiliser or technology…that’s where I’d like to see some of the Green Climate Fund resources being used. We also need to think about investing in things like water harvesting… supporting access to water for women. Those that have been vulnerable and marginalised must be the beneficiaries of climate negotiation and they must not be thrown crumbs – they need substantive policy support, structural support and technical support.

Q: Anything else on your COP 17 wish list? A: We need movement on forest protection, this affects the Congo basin countries, particularly the Democratic Republic of Congo. The Congo basin forests is one of the most important forests in the world….some might argue as equally important as the Amazon rain forest. We have to do everything in our power to prevent further destruction of that forest and have a sustainable forestry approach to del with he needs of the millions of people that live in the forest. It’s a key part of the lungs of the planet.