UNITED NATIONS, Sep 19 2011 (IPS) - Before 1999, she was best known as the richest woman in China. Her business empire included a trading firm, real estate investments and a department store, putting her among the top 10 wealthiest individuals in the Asian nation. 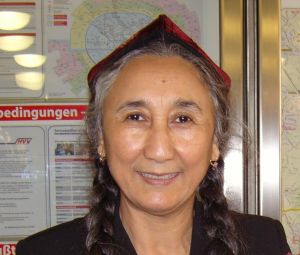 Today, Rebiya Kadeer is a political exile in Washington who works full-time defending the cause of the Uyghur people, one of the 55 national minorities in China.

The dramatic change in her life came in 1999 when she was imprisoned by the government and sentenced to eight years in jail for allegedly revealing “state secrets” to the United States. She was released in 2005 after a campaign organised by Human Rights Watch and Amnesty International, and following the intervention of the George W. Bush administration in the U.S.

Since then, she has been working with the Uyghur American Association.

“I realised that I had to challenge the Chinese government’s treatment of Uyghur people after the massacre of Uyghurs in February 1997. At that time, I realised that Chinese leaders were not interested in improving the lives and in respecting the human rights of the Uyghur people,” she told IPS.

Nominated for a Nobel Peace Prize in 2006, Kadeer has been accused several times by the Chinese government of instigating riots organised by opposition groups, and in particular the Uyghurs, Muslims located in the Xinjiang Autonomous Region, one of the most important because of its rich natural resources.

Uyghurs have expressed concern about the immigration of Han Chinese people in their territory and efforts to destroy their language and their whole culture.

To publicise the situation of the Uyghur people, Kadeer will participate at the Global Summit Against Discrimination and Persecution Sep. 21-22 next to U.N. headquarters in New York.

The conference will produce draft resolutions on genocide, torture, discrimination, and the systematic violation of civil, religious and political freedoms.

IPS correspondent José Domingo Guariglia interviewed Kadeer to talk about her expectations for the summit, the situation in China, and how the United Nations can intervene to guarantee the respect of human rights.

Q: Why did you decide to participate in the Global Summit Against Discrimination and Persecution? A: The reason is because the Uyghur people, including me, suffered persecution and discrimination under the six-decade rule of the Chinese Communist Party. I am highly sympathetic to all oppressed peoples around the world who have been persecuted and discriminated by authoritarian countries like China. I want to stand with them and support their peaceful struggles for freedom and human rights.

Not only the governments but also the long-suffering peoples will pay attention to this very important summit. I am sure the authoritarian countries will pay even more attention.

Q: One of the petitions of the organisers of the summit is to ban nations like China, Iran and Saudi Arabia from U.N. bodies that regulate basic freedoms. Do you think it will be possible? A: I believe all dictatorial and repressive states should be banned from all bodies which regulate basic freedoms at the U.N. Their presence at such bodies is incompatible to the way they rule their own countries. The U.N. will only lose its credibility by allowing such authoritarian regimes to be on the boards of such bodies.

Q: The panel sessions will also include the topic of the “Arab Spring” and the events that took place in Tunisia and Egypt. Are the conditions favourable in China for something similar to occur? A: I believe the conditions are soon going to be favourable in China in light of the heavy-handed repression of the Chinese authorities against Chinese democrats, Uyghurs and Tibetans and all those who are not happy with China’s communist rule. Things are bound to change in China whether the Chinese Communist Party is willing to do it or not. It is just a matter of time.

The Chinese Communist Party cannot stop the legitimate demands of the Uyghur, Tibetan and the Chinese people for freedom, human rights and democracy.

Q: Why does the Chinese government refer to Uyghur people as terrorists? A: Because Uyghurs believe in Islam. It is a convenient cover for the Chinese authorities to deceive the international community on the nature of Uyghur’s struggle and justify its brutal repression against the peaceful Uyghur people.

The Chinese government has to stop its brutal treatment of Uyghurs, Tibetans and Chinese and allow them to live with human dignity and without fear.

I’d like to ask the Chinese government to initiate a genuine dialogue to peacefully resolve the political status of East Turkestan (Xinjiang). But I am not sure if the current Chinese leadership has the political will to initiate such dialogue. Their heavy-handed approach to resolve the Uyghur problem has failed.

Labelling Uyghur dissent as terrorism and launching attacks on peaceful Uyghurs will never create the conditions for peace and stability or the harmonious society championed by Chinese President Hu Jintao.