Q&A: “We Expect the Polluters to Pay”

Kristin Palitza speaks to TOSI MPANU-MPANU, chair of the Africa Group of Negotiators for Climate Change

BAMAKO , Sep 26 2011 (IPS) - Africa will have to present a strong position at the United Nations climate change conference later this year to ensure the continent will receive the financing to mitigate and adapt to climate change. 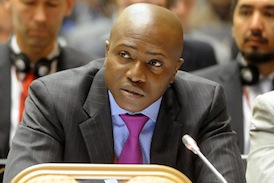 Tosi Mpanu-Mpanu will lead the COP17 negotiations on behalf of the African Group of Negotiators. Credit: Leila Mead/IISD

Africa contributes only four percent of global greenhouse gasses but it is the continent most vulnerable to climate change’s adverse effects.

During the Nov. 28 to Dec. 9 17th U.N. Framework Convention on Climate Change in Durban, South Africa, Tosi Mpanu-Mpanu will lead the negotiations on behalf of the African Group of Negotiators on Climate Change (AGN).

Mpanu-Mpanu is also director of the Clean Development Mechanism Designated National Authority of the Democratic Republic of Congo (DRC).

Q: What demands will Africa make in its Common Position? A: Africa wants an outcome based on science that is fair and honours the promises all countries have made in the U.N. Climate Convention and its Kyoto Protocol. We need to agree to global reductions for 2050 that limit warming to well below the predicted 1.5 degrees Celsius in Africa.

We need to close the ‘mitigation gap’ by ensuring developed countries take on fair and appropriate contributions. Their current weak pledges, along with accounting loopholes, would result in them doing very little or nothing to curb climate change before 2020.

Q: With 54 countries, the AGN is one of the largest negotiating blocs. Is it difficult to agree on a common position? A: Obviously. We have 54 different national interests and development levels that make it challenging to come to a common position. But we understand the importance of reaching middle ground. We need critical mass that cannot be ignored. We need to go beyond national interests. Speaking with one voice will give us leverage.

Q: How do you ensure the COP process does not become “an expensive talkfest”, as some critics believe? A: No group has been more critical about the tendency for “talk without action” than the African group. For any process to remain relevant it must produce. The big issue – cutting emissions – remains elusive.

We have, for instance, been discussing the same greenhouse gas reduction targets since 2005. What we are now looking for is a simple commitment to action by our negotiating partners. It is not a question of horse-trading. There are some things we cannot compromise on if we are to protect our people.

Q: With COP17, the Kyoto Protocol’s first commitment period will come to an end. What are the chances of developed nations re-committing? A: Some wealthy countries are delaying the Kyoto negotiations. Three countries – Japan, Canada and Russia – have expressed reluctance to honour their promises. The United States repudiated its commitments a number of years ago.

But the world cannot be held hostage by a handful of countries. Africa will not serve as the burial ground of the only legally binding treaty requiring those most responsible for causing climate change to reduce their climate pollution.

Q: How will you manage the potential ‘financing gap’ after 2012? A: Finance is one of the key issues for Durban. We expect the polluters, and not the poor in Africa, to pay. If Africa is to take on new actions (commitments), we need to ensure we are getting new and additional finance.

There is no commitment for 2013, and the pledge of developing nations to pay 100 billion dollars a year from 2020, while an important start, bears no relation to the level of need as identified by major institutions including the U.N. and World Bank. Durban must deliver an agreement on finance.

Q: Some developed nations demand to include emerging economies like China, India, Brazil and South Africa in legally binding emissions reduction targets. Do you agree? A: The U.N. climate convention is very clear about this. Historical responsibility lies with developed nations. The demand by developed countries that all “major economies”, including some developing countries, take on binding commitments departs from the 2007 Bali Roadmap.

If we depart from promises made as recently as 2007, how can we trust what comes next? Africa is more than willing to play ball, but only if the other side does not keep moving the goalposts.

Q: Are the projects planned during last year’s Cancun Agreements on track? A: The Africa Group has written proposals on the technology mechanism, adaptation framework, standing committee on climate finance, forum on response measures and other institutional arrangements. Egypt, DRC, Burkina Faso, Gabon and Zambia have submitted a proposal for the new Green Climate Fund.

We see these as essential building blocks to strengthen the climate architecture. But they need to be complemented by progress on the key issue for curbing climate change: cutting emissions.

Q: Will carbon markets be the way to reduce greenhouse gas emissions? A: Right now, the prospect of carbon markets is bleak. The U.N. Environment Programme says we must achieve 12 gigatonnes (Gt) of global reductions by 2020. Developing countries have pledged 5Gt, if supported with finance. This would leave 7Gt for the developed countries.

But they have, unfortunately, pledged less than 4Gt, and have around 4Gt available in so-called “loopholes”. They are offering nothing. If they (do not have to effectively reduce emissions) by 2020, then why would they need to purchase carbon credits from Africa or elsewhere?