UXBRIDGE, Canada, Sep 15 2011 (IPS) - All the analysis and commentary about safety and security on the tenth anniversary of 9/11 ignored by far the biggest ongoing threat to global security: climate change. 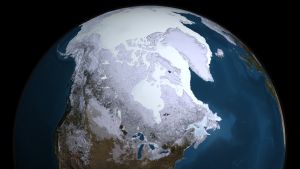 Just days before Sunday’s commemoration of the attacks, German scientists pointed to yet another smoking gun of climate change: the Arctic sea ice reached a new historic minimum ice extent.

The rapidity with which the planet is losing its northern ice cap continues to astonish experts. The defrosting northern pole is one of the prime drivers of Earth’s climate system and is changing global weather patterns in unpredictable ways.

The Arctic ice melt is also accelerating the rate of climate change beyond what humanity is doing with every barrel of oil, tonne of coal or cubic metre of gas burned.

On Sep. 8, researchers at the University of Bremen in Germany reported that the Arctic ice melt bettered the previous minimum of 2007. Other research centres using different satellite and analysis tools say the extraordinary decline of ice in 2007 has not yet been exceeded this year and 2011 remains a close second.

“We think it will end up a little bit short of the record – not that it really matters,” said Mark Serreze, director of the National Snow and Ice Data Center in the U.S. city of Boulder, Colorado.

“What is extraordinary this year is that there was no weird weather pattern that created the perfect conditions for the record melt in 2007,” Serreze told IPS.

This year, the summer weather was normal and yet it the ice vanished in similar amounts to 2007.

“That tells us the sea ice is too thin now to hold up under normal weather conditions,” he said.

Both the Northwest Passage and the Northern Sea Route across the Arctic are wide open again, as has happened almost every year since 2007. An oil tanker recently crossed the Arctic Ocean in the record time of eight days travelling from Houston, Texas to Map Ta Phut, Thailand.

This summer’s ice loss is double the summer ice melt of 30 to 40 years ago. A child born at the advent of the satellite era, when humanity had its first complete look at the frozen vastness, would be 32 years old today. Now they would see that more than three million square kilometres of ice – about the size of India – has vanished this summer compared to the summer they were born.

It is now virtually certain a child born in 1979 will not reach 50 years of age before the Arctic is ice-free in the summer. That is a rapid change on a planetary scale, with far-reaching consequences that scientists are just beginning to understand.

One consequence is the acceleration of global warming as the Arctic flips from all white to dark blue, with the ocean absorbing tremendous amounts of heat from the 24-hour summer sun. That shift in albedo – from white to dark – is expected to add an additional amount of heat energy of about 0.3 watts per square metre over the entire land and water surface of the planet, calculates Stephen Hudson of the Norwegian Polar Institute.

Hudson based his calculation on the Arctic having no ice for one month and decreased ice at all other times of the year.

That’s enough additional energy to power an LED night light for each square metre of the 510 million square metres that comprise the Earth’s surface. That will raise global temperatures about 0.25 C, John Abraham of the University of St. Thomas in Minnesota told IPS.

Of course, most of that tremendous amount of heat will reside first in the Arctic, where temperatures are already an average of three to five degrees C higher than 30 to 40 years ago. This winter parts of the Arctic were 21 C above normal for a month.

All that additional heat threatens to light the fuse of the world’s biggest “carbon bomb”, the vast permafrost region spanning 13 million square kilometres across Alaska, Canada, Siberia and parts of northern Europe.

Permafrost contains at least twice as much carbon as is currently present in the atmosphere. Even if a small percentage of this is released, catastrophic climate change is likely, experts believe. Permafrost has been slowly thawing for the last two decades and the rate of thaw is accelerating with rising temperatures, world expert on permafrost Vladimir Romanovsky of the University of Alaska in Fairbanks told IPS previously.

This will have profound impacts on human populations around the globe. According to figures from the Global Governance Project, by the year 2050, the world will have 200 million climate-displaced refugees on its hands, the majority of them from low-lying coastal areas, as a result of rising water levels.

While this climate change calamity gains momentum, the U.S. and most of the industrialised world have been distracted by the relatively trivial threat of terrorism and have spent trillions of dollars on defence and the wars in Iraq and Afghanistan.

The U.S. could generate 100 percent of its electricity from wind, solar, tidal and geothermal for much less than it has spent on defence and wars in the last decade, said Richard Heinberg, energy expert and senior fellow at the California-based Post Carbon Institute.

However, the U.S. economy is in such poor shape, Heinberg, author of the new book “The End of Growth“, told IPS, that the country is no longer financially capable of doing this. Nor can it afford to continue to burn fossil fuels.

“We’re going to be forced to use a lot less energy sooner or later,” he said.