Ship of State Needs More Women at the Helm

UNITED NATIONS, Sep 20 2011 (IPS) - Less than 10 percent of the world’s political leaders are female, according to United Nations figures, but many of them were present Monday at U.N. headquarters in New York, where they reiterated calls for increased participation for women as critical to both economic development and democracy. 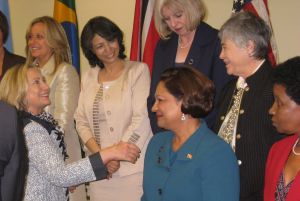 The leaders who took part in the high-level event held during the 66th session of the General Assembly included female presidents, prime ministers, and ministers. They all signed a joint statement affirming “that women’s political participation is fundamental to democracy and essential to the achievement of sustainable development and peace.”

Today, 28 countries have reached or exceeded the 30 percent critical mass target set by the U.N. for women in parliament, and 19 women are serving as elected heads of state or government according to the new U.N. Entity for Gender Equality and the Empowerment of Women, or UN Women.

Michelle Bachelet, the former president of Chile and now executive director of UN Women, spoke of the necessity for solidarity among both men and women to achieve gender equality.

“We are bound by a common goal to open the way for women to participate in all decisions affecting not only their lives but the development of our world, at a global, regional, national and local level by making full use of half of the world’s intelligence. The intelligence of women,” she stated.

U.S. Secretary of State Hillary Clinton emphasised the importance of reaching out to changing societies, particularly in the Middle East and North Africa, to ensure that the thousands of women who participated in pro-democracy uprisings are also made an active part of their countries’ future.

As an example of progress, she cited Tunisia, where the commission responsible for drafting the electoral code ruled that there must be total gender parity in the elections lists.

Lilia Labidi, the Tunisian minister for women’s affairs, stressed that in order “to satisfy the legal requirements of parity, these parties need to make a greater effort to recruit women and to make their programmes attractive to women”.

But she added that much remains to be done by the political parties and society as a whole.

“This would include education, cultural programmes, civil society activity, etc.,” she said. “The importance of the media to promote women’s political participation is crucial, and up to now, the efforts in this direction have not been very satisfactory.”

Labidi talked about the struggles facing women in Tunisia today after 20 years of living under an authoritarian state.

Thirty percent of parliamentary seats used to be held by women during the old regime, but they still didn’t have any real say, Labidi explained. Women today are “very disappointed that the new political parties haven’t done much to secure the political participation of women”, she added.

“The problem is that not all women of the society are involved in politics, or even a large group, which is something that is difficult for us today. We have 110 political parties, we succeeded to have the parity law, and society accepted it as a fact without any resistance which is very important,” she told IPS.

“But at the practical level it is very, very hard because one thing is that political parties are saying that they don’t find women and they are obliged to recruit among their own family, which is not good because it brings us the same situation that we had in the past. Probably there aren’t women really to take women into the political arena. This can only be explained by the past,” she said.

In the developing south, several strategies have been used to increase women’s political representation, said the prime minister of Trinidad and Tobago, Kamla Persad-Bissessar.

She talked about the zebra or zipper system that alternates the number of female and male candidates equally on political party lists in local and national elections, which has been done in Namibia and South Africa, as well as the reservation of 33 percent of seats for women in local government in India.

According to data from the Inter-Parliamentary Union (IPU), quotas remain the most effective method of increasing the number of women in politics.

Figures from the IPU show that the number of women in parliaments globally is slowly increasing.

For example, in 2005, there were no women in the Kyrgyz Parliament. Two years later, after a nationwide discussion, a 30-percent gender quota was included in the electoral laws.

By 2008, Kyrgyzstan had the highest proportion of women in parliament (25.6 percent) and in government (21 percent) in Central Asia, according to the U.N.

Bachelet spoke about the importance of making women visible in symbolic leadership positions, citing the example of a visit by Finnish President Tarja Halonen to a kindergarten class.

“Madam President always shared with us the story when she went to a kindergarten and she asked them what they wanted to be when they were growing up. Everybody answered the typical answer and then she asked a little boy. ‘Don’t you want to be president of the republic?’ and she had been at that time, for eight years or seven years, president of Finland. And the little boy said ‘No, in Finland boys cannot be president’.”

The General Assembly created UN Women on Jul. 2, 2010 and it officially launched at the beginning of this year.