COLOMBO, Sep 25 2011 (IPS) - For Magei Kasai the battle against hardships did not end when the guns fell silent two years ago in the Sri Lankan civil war. New battles began for survival, for herself and for what was left of her family. 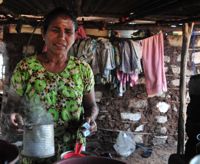 Almost a quarter of all households in the former conflict zone are headed by single women. Credit: Amantha Perera/IPS.

The 45-year-old mother of two lost her husband and a son to the war. Since the war ended in May 2009, more than 300,000 survivors like Kasai have returned to their native villages. Kasai returned to almost nothing in her village Allankulam, about 320 km from capital Colombo in the Mulaithivu districts, where the battles were at their worst. “No house, no garden, no vegetable plants, no nothing,” she tells IPS.

She now cooks, cleans and does the everyday chores at home, which is a mud hut with leaking tin sheets as roof. Her work does not end there. She is one of a group of five women who have begun a poultry farm to keep the kitchen fire burning.

The five women got together and pooled 30,000 Sri Lankan rupees (around 240 dollars), some of it saved from funds they received as assistance when they returned to their villages, some saved from what they earned from taking part in cash for work programmes. “We got 25,000 rupees (about 200 dollars) when we left the camps (for the displaced) to build temporary homes. What was more important was money to live, so I did not spend the full amount (on the house),” Kasai says.

The poultry operation now brings in about 300 rupees (2.50 dollars) per day, just enough to feed and clothe two teenage sons. One son has left school to look for work. “Work, where is the work, there is nothing but temporary labourer jobs here,” Kasai says, tears rolling down her cheeks. “It would have been better if he stayed in school.” Her youngest is also now rebelling to leave school and follow his brother.

The pressures of eking out a living have driven the most unexpected of women to become wage earners. In a village close to that of Kasai, 62-year-old Selvanayagi Chellathurai is now part owner of a poultry farm. Like Kasai the grandmother put in her savings to set up the small farm with five others.

“I have 12 members of my family living in one compound, only one male who is working, I had no choice but to do this,” she tells IPS. It is a decision that thousands like her are making.

According to funding reports compiled by the Sri Lanka government and donors, more than 30,000 of about 110,000 families that have returned to the former battlefield are headed by single women.

“It is a figure that may be an under-assessment because of lack of data,” Saroja Sivachandran, director at the Centre for Women and Development in Jaffna in the north tells IPS. She says there are many women whose husbands have either gone missing or are in detention, and who are yet to register with authorities.

The World Bank found that more than two-thirds of those who participated in a cash for work programme in the former conflict zone last year were women. The programme that paid out 5.5 million dollars for about 290,000 days of work eased the participation of single women.

“We allowed the participants to select how they took part in the programme,” Susrutha Goonasekera, social protection economist at the World Bank tells IPS. Women were allowed to take part when they could. Arrangements were also made to pay elders to look after children so that women were free to work.

Sivachandran tells IPS that more programmes that benefit single women are needed in the former conflict zone. “A lot of people talk about the issues facing single women, especially those with children, but few have taken action that will help them.”

A mid-year review of a joint 280 million dollar U.N-Sri Lanka government development plan for the region identifies households headed by single women as a target group that needs special attention.

Sivachandran says such action is necessary. “There are social barriers to be broken. In the northern Tamil society the traditional role of the woman was at home. It is still a very patriarchal system. But now we have to compete with men for the few jobs.”

Most of the jobs going in the former conflict zone are in construction, agriculture and fishing where employers look for men to sweat it out. “We need programmes that are tailor-made for these women, otherwise they will always come second,” says Sivachandran.