CAPE TOWN , Sep 8 2011 (IPS) - While globally trade agreements are more and more about linking production chains between countries and continents, Africa remains locked in a struggle to overcome the colonial legacy of fragmentation, trade experts say. 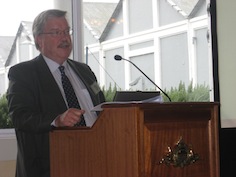 “It’s no longer a world of them and us. Countries are all part of the same production chain, so by practicing protectionism we would shoot ourselves in the foot,” said Chief Economist of the World Trade Organization (WTO) Patrick Low.

Low referred to the WTO’s World Trade Report 2010 that shows that 87 percent of trade conducted under PTAs enjoys a preferential margin of just two percent. And only 16 percent of world trade is subject to preferences.

“It’s no longer just about opening markets, but about subtle ways to create a competitive environment for your industry. By engaging in such deep PTAs, trade within production networks has gone up by eight percent,” said Low.

However, this does not apply to Africa.

“Africa does not fit into this pattern. Rather than accommodating production networks, it is locked in a struggle to overcome the colonial legacy of fragmentation. PTAs in Africa are therefore rather shallow and do not necessary lead to deeper integration,” observed Low.

An analysis of global trends in PTAs shows they increasingly facilitate the removal of obstacles to cross-border production. They are highly private sector-driven, with a buy-in from government and with domestic regulation supporting regional developments. They also often go further than what the WTO prescribes for free trade.

In Africa, said trade law expert and Tralac associate Gerhard Erasmus, PTAs are motivated by post- colonial politics and characterised by a top-down government-led approach. Africa also pursues a linear model of trying to move from Free Trade Areas (FTAs) to a customs union and ultimately a common market. This is not always realistic and results in ‘messy’ FTAs without the proper monitoring and enforcement of rules.

For instance, the Southern African Development Community (SADC) is in name a FTA, but it continues to suffer from numerable trade barriers.

“A truck driver shipping goods from South Africa to the Democratic Republic of Congo will be, for instance, held up at a border by obstinate officials citing improper documentation and be forced to abandon the truck.

“Upon returning to the border post, after months of unsuccessfully trying to seek redress through the courts, the truck will be gone and so will the merchandise,” Erasmus said of the daily challenges private sector players face.

Development of services, such as a cost-effective transport sector, is largely avoided in the extensive trade talks African countries have engaged in over the past decade. Yet without them, trade suffers.

“For example 40 percent of Rwanda’s export income is gobbled up by transportation costs,” said Erasmus.

“Africa continues to be preoccupied with trade in goods, rather than embracing a deeper regional integration agenda like elsewhere in the developing world. Talks are mostly state-driven with both the private sector and civil society occupying a peripheral place. The private sector should be engaged to boost deeper integration,” said Tralac Director Trudi Hartzenberg.

Services are essential to boost the production sector or networks, even when they deal with goods, said the Organisation for Economic Co-operation and Development’s Hildegunn Nordhas. He said that services were needed to grow industry and businesses. The development of services can open markets or boost productivity.

“The cut-flower trade in Kenya only started flourishing when more tourists flocked to Kenya, thereby establishing regular air connections that could then be used to export flowers.

“Or take the proliferation of the telecom sector in Africa. Where you previously had to drive to a farm in the rural areas to see if they had produce, you can now call the farmer on his cell phone,” Nordhas said.

To continue to ignore the development of the service industry in trade agreements on the continent will do Africa no favours in the long run, Nordhas said.

“The relative gap between developed and developing countries that invest in services and Africa will grow and we will fall behind. So actually the development of services is a priority.”