U.S.: A Dark Decade for Civil Rights and Liberties

WASHINGTON, Sep 9 2011 (IPS) - The tenth anniversary of the attacks on the World Trade Center’s Twin Towers and the Pentagon on Sep. 11, 2001 is marked by mourning. 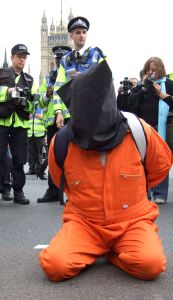 With rallies planned across the country, largely concentrated at the sites of the twin tragedies in Washington D.C. and Lower Manhattan in New York City, victims’ family members and politicians will gather on Sunday to share a solemn moment for those who were killed and maimed on that fateful day.

But another group of mourners are making themselves heard this year, lamenting more than just civilian deaths.

Led by civil rights and advocacy organisations like the American Civil Liberties Union (ACLU), the Center for Constitutional Rights (CCR) and the Brennan Center for Justice, this group is marking the demise of pre-9/11 democracy in the U.S., using the auspicious day to demand restoration of basic human and civil rights.

“We are using this moment to take a step back and ask big, broad questions about how and why the U.S. continues to define itself in a state of perpetual emergency, how we seem to be moving towards a national security state, rather than returning to a proper balance between liberty and security,” Ben Wizner, litigation director of the ACLU’s National Security Project and co-author of the union’s newly- minted report “A Call to Courage“, told IPS.

Wizner acknowledged that the U.S. has a long history of responding to national trauma by restricting rights and ladling out unchecked power to the executive during times of crisis – a pattern that is clearly marked out by the government’s clampdown on individual rights and liberties during the Civil War, the Cold War and World War II, he said.

“But part of that pattern has always entailed realising our mistakes, admitting when we went too far, and attempting to regain some sort of balance in civil society,” Wizner said, adding that in the decade since 9/11, the opposite has been true.

“The danger of defining a war as being against ‘terrorism’ is that it takes place everywhere and may last forever, the war itself becomes an abstraction rather than a reality, and there is no end in sight,” he said.

“After the massive security response to 9/11, we all thought the pendulum would swing back, but it appears to be going in the same direction. Despite the fear-mongering, we haven’t seen massive follow-up attacks in the U.S., the political debate is the same as it was 10 years ago, more and more power is being channeled to the executive and to law enforcement and there has been increased authorization of illegal detentions without charge or trial and to the use of lethal force away from traditional battlefields,” he concluded.

According to the CCR, the decade since 9/11 has been used to “shred the U.S. Constitution, trample on the Bill of Rights, discard the Geneva Conventions, and heap scorn on the domestic torture statute and the U.N. Convention Against Torture and Other Cruel, Inhuman or Degrading Treatment or Punishment.”

Hauling President Barack Obama into the spotlight for failing to deliver on any of his 9/11-related promises, the CCR claimed that Obama “has failed to shut down Guantánamo and to hold the Bush administration accountable for its war crimes, including torture; (has allowed) war in Afghanistan to rage on with no sign of termination; and has perpetuated the practice of rendition to third countries for interrogation and indefinite detention, when monitoring and ‘diplomatic assurances’ cannot prevent against torture.”

To commemorate the anniversary, the CCR compiled a database of its own clients who have suffered from the climate of impunity and illegality that has reigned for 10 years, including testimony from Maher Arar, a Canadian citizen who was tortured for a full year in Syria; 17-year-old Mohammed Khan Tumani, one of the original 22 minors to be detained and severely abused in Guantanamo Bay; and Benamar Benatta, who spent a total of five years in detention and is currently a plaintiff in a class-action lawsuit against former attorney-general John Ashcroft.

Benatta’s testimony reads, “(While) in detention, I was unaware of how far the horrors of 9/11 had changed our world. We have let fear and hatred get the best of us.”

As security tightens around New York and Washington on the eve of the weekend anniversary, a pressing concern on the radar of countless civil rights advocates has been the impingement of the state surveillance apparatus onto personal privacy.

A recent report by the Associated Press that exposed the close working ties between the New York City Police Department (NYPD) and the Central Intelligence Agency (CIA) drew attention to some of the destructive effects of counterterrorism on local communities, particularly the CIA’s practice of deploying “authentic” spies into local communities for information-gathering purposes.

According to the AP report’s authors, “the NYPD [currently] operates far outside its borders and targets ethnic communities in ways that would run afoul of civil liberties rules if practiced by the federal government… and it does so with unprecedented help from the CIA in a partnership that has blurred the bright line between foreign and domestic spying.”

Faiza Patel, co-director of the Liberty and National Security Programme at the Brennan Center for Justice, wrote last week, “The privacy of our homes and our communications has been eroded by a range of new measures. These include secret ‘sneak and peek’ warrants that allow the government to search your home without telling you about it until months later and national security letters that compel banks and Internet service providers to secretly reveal your personal information.”

Critics say that far from making the country safer, these programmes and policies have actually made the U.S. more vulnerable, both in its image overseas and, more importantly, on a domestic level.

According to Heidi Beirich, research director of the Southern Poverty Law Center, the post-9/11 climate has seen a rise in hate groups across the country, possibly one of the most worrisome manifestations of a population’s insecurity.

“There were no specific anti-Islamic hate groups before 9/11,” Beirich told IPS.

“Now there are groups solely devoted to anti-Muslim hatred, including groups such as Pam Geller’s ‘Stop Islamization of America’,” she added, referencing a group notorious for its Muslim-bashing that is planning what will undoubtedly be a highly racially charged rally in New York this Sunday.