WASHINGTON, Sep 8 2011 (IPS) - A decade after its spectacular Sep. 11, 2001 attacks on New York City’s twin World Trade Center towers and the Pentagon and despite the killing earlier this year of its charismatic leader, Osama bin Laden, Al Qaeda appears to have largely succeeded in its hopes of accelerating the decline of U.S. global power, if not bringing it to the brink of collapse. 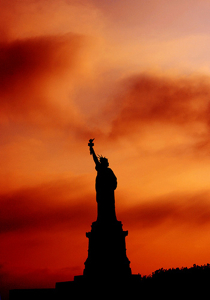 Since 9/11, the United States' global standing has plunged dramatically -- a decline largely fueled by its alienating and costly "war on terror". Credit: A. Golden/eyewash design

That appears to be the strong consensus of the foreign-policy elite which, with only a few exceptions, believes that the administration of President George W. Bush badly “over- reacted” to the attacks and that that over-reaction continues to this day.

That over-reaction was driven in major part by a close-knit group of neo-conservatives and other hawks who seized control of Bush’s foreign policy even before the dust had settled over Lower Manhattan and set it on a radical course designed to consolidate Washington’s dominance of the Greater Middle East and “shock and awe” any aspiring global or regional rival powers into acquiescing to a “unipolar” world.

Led within the administration by Vice President Dick Cheney, Pentagon chief Donald Rumsfeld and their mostly neo-conservative aides and supporters, the hawks had four years before joined the Project for the New American Century (PNAC). The letter-head organisation was co- founded by neo-conservative ideologues William Kristol and Robert Kagan, who, in an important 1996 article, called for the U.S. to preserve its post-Cold War “hegemony as far into the future as possible.”

In a series of subsequent letters and publications, they urged ever more military spending; pre-emptive, and if necessary, unilateral military action against possible threats; and “regime change” for rogue states, beginning with Iraq’s Saddam Hussein.

On the eve of 9/11, PNAC’s notion that Washington could extend its “benevolent global hegemony” indefinitely did not appear unreasonable. With more than 30 percent of the global economy, the strongest fiscal position in a generation, and a defence budget greater than the 20 next-most-powerful militaries combined, Washington looked unchallengeable, a perception soon enhanced by the show of national unity that followed the attacks and the speed and apparent ease with which Washington orchestrated the defeat of the Taliban in Afghanistan later that year.

“I’ve gone back in world history and never seen anything like it,” exclaimed Yale University historian Paul Kennedy, a leading exponent of the “declinist” school of U.S. power 15 years before, about Washington’s dominance, which he compared favourably to the British Empire in its day.

PNAC’s associates were similarly impressed. “People are now coming out of the closet on the word ’empire’,” exulted the Washington Post’s neo-conservative columnist, Charles Krauthammer, a Cheney favourite and long-time advocate of a U.S.-led “unipolar” world. “The fact is no country has been as dominant culturally, economically, technologically, and militarily in the history of the world since the Roman Empire.”

Such exuberance (or hubris) naturally fueled the next phase in PNAC’s quest – originally laid out in an open letter to Bush published by the group just nine days after 9/11 – for victory in what was now called the “global war on terror”: regime change in Iraq.

“Failure to undertake such an effort will constitute an early and perhaps decisive surrender in the war on international terrorism,” PNAC had warned, arguing that Washington must expand its target list to include states — particularly those hostile to Israel — that support terrorist groups, as well as the terrorist groups themselves.

So, instead of focusing on capturing bin Laden and other Al Qaeda leaders and providing the kind of security and material assistance needed to pacify and begin rebuilding Afghanistan, Bush turned his attention — and diverted U.S. military and intelligence resources — to preparing for war against Iraq.

That decision is now seen universally — with the exception of Cheney and his die-hard PNAC supporters — as perhaps the single-most disastrous foreign policy decision by a U.S. president in the past decade, if not the past century.

Not only did it effectively set the stage for an eventual Taliban comeback in Afghanistan (which is now costing the U.S. some 10 billion dollars a month), but it also destroyed the international support and solidarity Washington had enjoyed immediately after the 9/11 attacks — a fact made excruciatingly clear by Bush’s failure to gain U.N. Security Council backing for his invasion of Iraq in March 2003. It also helped persuade tens of millions of Muslims that the U.S. was waging war on Islam, according to dozens of public-opinion surveys.

Indeed, by invading Iraq, the U.S. fell into a trap set by bin Laden who, convinced that Moscow’s decade-long occupation of Afghanistan contributed critically to the Soviet Union’s eventual collapse, clearly believed that the U.S. was susceptible to the same kind of over-extension.

“We, alongside the mujahedeen, bled Russia for 10 years until it went bankrupt and was forced to withdraw in defeat,” he said in a 2004 video-tape describing what he called a “war of attrition.”

“We are continuing this policy in bleeding America to the point of bankruptcy,” he added. “All that we have to do is to send two mujahedeen to the furthest point east to raise a piece of cloth on which is written ‘Al Qaeda’, in order to make generals race there and to cause America to suffer human, economic and political losses without their achieving anything of note other than some benefits for their private corporations,” he went on.

Of course, by the time bin Laden recorded those remarks, the U.S. forces in Iraq were battling a growing insurgency, one that not only would result in hugely costly abuses by U.S. forces at Abu Ghraib that inflicted serious damage to Washington’s already-tattered moral image, but that would also push Iraq to the very brink of civil war and lead to an even deeper and more expensive intervention by the U.S. military.

True to bin Laden’s prediction, Washington, goaded by PNAC associates and alumni, also deployed forces — or drone missiles at the very least — to virtually wherever Al Qaeda or its alleged affiliates raised its flag, often at the cost of weakening local governments and incurring the wrath of local populations, particularly in Somalia and Yemen.

More importantly, the same held true in nuclear-armed Pakistan, not to mention Afghanistan, where Bush’s successor, Barack Obama, more than doubled U.S. troop strength to 100,000 in his first two years in office, even as he withdrew an equivalent number from Iraq.

The costs have been staggering in almost every respect. The estimated three to 4.4 trillion dollars Washington has incurred either directly or indirectly in conducting the “global war on terror” account for a substantial portion of the fiscal crisis that transformed the country’s politics and brought it to the edge of bankruptcy last month.

And while the U.S. military remains by far the strongest in the world, its veil of invincibility has been irreparably pierced by the success with which rag-tag groups of guerrillas have defied and frustrated it. The result, according to conservative New York Times columnist Ross Douthat, has been “a steady erosion of America’s position in the world,” which Obama has so far been unable to reverse.

“…(F)or a long time,” wrote Richard Clarke, a top national-security official under Bush who warned the White House several months before 9/11 that Al Qaeda was planning a major operation against the U.S. homeland, in the dailybeast.com, “we actually played into the hands of our opponents, doing precisely what they had wanted us to do, responding in the ways that they had sought to provoke, damaging our economy and alienating much of the Middle East.”

And leading the charge were precisely those hawks whose fondest wish was to extend, rather than cut short, Washington’s global hegemony.