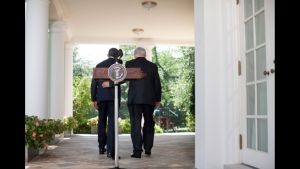 Not only did the allegedly most “anti-Israel” president ever repeat, for the nth time, that “America’s commitment to Israel’s security is unshakeable,” but also made crystal clear that Washington will veto any Palestinian application to the U.N. Security Council for statehood in his speech this week to the U.N. General Assembly.

Not once did he refer to Jewish “settlements” on Palestinian lands; nor did he even use the word “occupied” – or any declension of that word – to describe those lands and their people in an address that was largely, if ironically, devoted to celebrating this year’s Arab struggles to end autocratic rule in their region.

Nor was there a word about the plight of the still-besieged population of Gaza, or about the “1967 borders” as being the basis for any eventual two-state solution, a formula to which Netanyahu and his U.S. allies vehemently objected much to the consternation and exasperation of the White House only four months ago.

Indeed, President Barack Hussein Obama, as his right-wing and Islamophobic critics like to call him, said nothing to which even the most right-wing faction of Netanyahu’s government could object.

“I congratulate President Obama, and I am ready to sign on this speech with both hands,” enthused Israeli Foreign Minister Avigdor Lieberman, the leader of the far-right – some say proto-fascist – Yisrael Beiteinu party, while Netanyahu himself called Obama’s address to the U.N. General Assembly “a badge of honour”.

“Listening to him, you would think it was the Palestinians who occupy Israel,” Hanan Ashrawi, a veteran Palestinian stateswoman, told Israel’s Haaretz newspaper, noting what even the New York Times suggested seemed to be the “hypocritical” nature of Obama’s enthusiasm for Arab democracy movements.

“He presented a double standard when he disassociated the Arabs’ fight for their freedom in the region from the Palestinian freedom fighters, who deal with the occupation for 63 years,” she said.

“What we heard is precisely why we are going to the U.N.,” she added, sounding a theme that has been taken up all week by many Middle East specialists: By siding so ostentatiously with Netanyahu and against the Palestinian bid for statehood, Obama has forfeited Washington’s 20-year exclusivity as broker of the clearly broken “peace process” between the two parties – a point made implicitly by the French President Nicolas Sarkozy’s call for the General Assembly to upgrade Palestine’s status to a non-member state.

“Witnessing Netanyahu’s stubborn rejectionism and President Obama’s inability to move the ball forward, President Sarkozy appears to be acting on Obama’s prediction last May at AIPAC (the annual meeting of the powerful American Israel Public Affairs Committee) – that … if there is no credible peace process, then others, including Europeans, will lose patience, and pursue alternatives to direct negotiations, including at the U.N.,” according to Daniel Levy, a former Israeli peace negotiator now based at the New America Foundation here.

Such alternatives will likely become more urgent, he noted, as a result of the “post-Arab Awakening era, one in which Arab democracy will be less tolerant of Palestinian disenfranchisement than Arab autocracy ever was.”

So why did Obama, who, speaking at the same podium exactly one year ago, set a deadline of this week for an agreement on Palestinian statehood, capitulate so abjectly to Netanyahu and the Israeli right?

While his administration’s defenders claim it has everything to do with keeping the “peace process” alive and minimising the chances of a new round of violence between Palestinians and Israelis, the answer is politics, or, more precisely, the perceived power of the AIPAC-led “Israel Lobby” in an election year.

“Once again, the transformational Obama has been sold out by the political Obama,” wrote David Rothkopf, a national security expert at the Carnegie Endowment, on his foreignpolicy.com blog early in the week.

Given his fading approval ratings and an economy that shows no signs of substantial improvement any time soon, the White House and Democrats on Capitol Hill appear increasingly panicked over their re- election prospects in November 2012.

They will do nothing that risks alienating key constituencies, particularly Jewish voters in a couple of key “swing states”, but most especially Jewish donors who account for an estimated between 40 and 50 percent of all contributions to national Democratic campaigns.

Since the beginning of this year, but particularly since Netanyahu’s May visit where he was rapturously received at the AIPAC conference, his Republican – and some Democratic – allies have deliberately and repeatedly promoted the notion that Obama’s alleged pressure on Israel to freeze settlements and take other steps to advance the “peace process” was souring Jews, nearly 80 percent of whom voted for Obama in 2008, on the president and his party.

When, on the eve of this week’s U.N. meeting, a Tea Party Republican, who was endorsed by former Democratic Mayor Edward Koch to protest Obama’s allegedly anti-Israel policies, defeated a Jewish Democrat in a heavily Jewish New York City Congressional district that Democrats had held for nearly 90 years, that meme was transformed into conventional wisdom, thus setting the stage for Obama’s speech – or surrender – this week before the General Assembly.

In fact, however, only seven percent of the mostly Orthodox Jewish voters in that election said Obama’s policies toward Israel affected their vote, according to exit polls.

And, while there has indeed been a substantial erosion in Jewish approval of Obama’s performance, it has not been disproportionate to the loss of confidence in his leadership by the public at large, according to a recent Gallup poll.

That survey, undertaken from Aug. 1 to Sep. 15, found that a 54- percent majority of Jewish respondents still approve of Obama, 13 percentage points higher than his overall 41 percent approval rating, and similar to the average 14-point gap between Jews and the general public seen throughout his term in office.

“It’s really about donors, not about votes, except perhaps in Florida (where Jews make up about five percent of the electorate),” according to M.J. Rosenberg, a veteran Israel analyst at Media Matters who worked for years at AIPAC and on Capitol Hill where AIPAC wields its greatest influence.

“The surrender we’ve been watching lately is all about the money,” he said.

“What AIPAC and other key groups like the Anti-Defamation League and the American Jewish Committee do successfully is to convince both the White House and Congress that every dollar that comes from someone Jewish is about Israel, when, in fact, most Jewish donors are contributing because of a host of liberal causes they believe in – from social security and gay marriage to the environment,” he told IPS.

“But I’m sure that President Obama believes that his financial support from the Jewish community is heavily contingent on his backing for Netanyahu,” according to Rosenberg. “And right now, everything he does is motivated by his desire for a second term.”