ATLANTA, Oct 31 2011 (IPS) - While some veterans of the Civil Rights Movement have joined forces with the Occupy Movement, other civil rights advocates, some of a new generation, have been more critical, even as the city government’s response to the movement reached new levels. 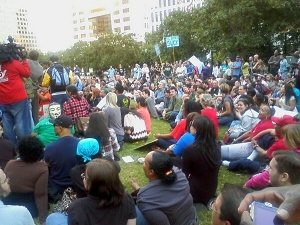 A scene from the Occupy Atlanta movement. Credit: Matthew Cardinale/IPS

After two weeks of camping out at Atlanta’s downtown Woodruff Park, unofficially nicknamed “Troy Davis Park”, 52 Occupy Atlanta protesters were arrested with the permission of Mayor Kasim Reed at about 1 am local time (05.00 GMT) the morning of Oct. 26.

That same night, as even more extreme and brutal police activity was seen in Oakland, California, Reed deployed about one hundred Atlanta police officers on foot, in addition to others on horseback and motorcycles and in helicopters, in a display of force estimated to cost taxpayers approximately 300,000 dollars.

Among the 52 arrested was Joe Beasley, a veteran of the Civil Rights Movement, as well as more contemporary progressive civil rights activists such as Vincent Fort, a state senator, and Derrick Boazman, a former city councilman.

Beasley is the president of African Ascension and southern director for the Rainbow/PUSH Coalition, a national organisation founded by civil rights activist Jesse Jackson.

In an interview with IPS prior to the arrests, Beasley called for Reed’s ouster, saying that he had requested a recall petition from the Atlanta municipal clerk’s office.

“It’s a gross abuse of power and waste of taxpayers’ money because he mobilised the Atlanta police, put them on a twelve-hour shift. He’s got them walking around the park in great numbers as if there’s some great threat to public safety,” Beasley said.

Beasley said the actions demonstrated Reed’s “unsuitability to hold office. If he’s got that poor judgment, he shouldn’t be mayor. There’s no danger whatsoever, except in his imagination.”

Shortly after the arrests, however, Rainbow/PUSH issued a statement distancing themselves from Beasley and the Occupy Movement.

“But they won’t come from the mere act of occupying Woodruff Park or any other space. Eventually, those goals will be achieved (if at all) with a focused, peaceful, strategic effort to influence policymakers and others,” the group said.

The younger Bond was originally among those urging Mayor Reed to be cautious with the protesters, but after a few days said, “Enough is enough.”

In a recent interview with the newspaper the Atlanta Journal-Constitution, he said it was unfair to allow Occupy Atlanta protesters to camp in the park after not allowing homeless people to camp even when the latter do not have a place to live.

“But when it’s twenty-something white kids, it’s allowed to go on. That kind of stuck with me,” Bond said.

As previously reported by IPS, Mayor Reed initially issued an executive order allowing Occupy Atlanta to stay in the park temporarily. He then issued a second executive order extending the first until what was supposed to have been a Nov. 8 deadline.

However, relations between Reed and Occupy Atlanta changed after the movement held a hip-hop concert in the park Oct. 22 without a permit from the city.

Reed took issue with the lack of security given the number of people at the park, as well as the use of a small electric generator. Reed then said he would revoke his executive order at a time of his choosing.

Reed said the final straw was when, the day before the arrests, a man began walking around the park with an AK-47 rifle. Occupy Atlanta said they did not know who he was.

But civil rights advocates like Beasley, Fort, and Boazman were there with Occupy Atlanta participants during their last days in the park, becoming their strongest advocates.

Indeed, the presence of respected, long-time Atlanta advocates lent some additional credibility to the movement.

Ironically, Occupy Atlanta, the very group initially so wary of establishment politicians that they would not allow Representative John Lewis, a Democrat from Georgia, to speak at their General Assembly the night they occupied the park came to rely on more established activists to stand with them in their final days at the park.

One of these more established activists, Richard Cobble, president of Concerned Black Clergy, said he has been “on the cutting edge for these past twenty-eight years”.

“The tenants and the people around this park are angry, they’re angry because they’ve made money on the backs of the poor. It’s time to bring an end to all of this. If they’re angry, let’s make them mad, because we are tired. And I want to encourage you,” Cobble said in a speech.