FREETOWN, Oct 31 2011 (IPS) - The adoption of international guidelines to regulate so-called land grabs has been pushed to next year after negotiators failed to agree on conditions for large-scale land investments and enforcement. 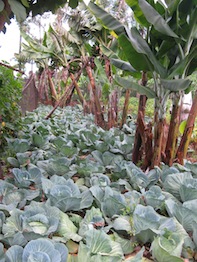 There are fears that a "land rush" in the developing world is leading to hunger, conflict and human rights abuses. Credit: Isaiah Esipisu/IPS

The guidelines, in the making for several years, were sparked by fears that a “land rush” is leading to hunger, conflict and human rights abuses.

More and more investors have flocked to the developing world over the past decade, snapping up huge tracts of farmland. Investment has intensified since the 2008 food and fuel price crisis.

Once in place, the United Nations’s Committee on World Food Security guidelines are meant to protect people, mainly in poor countries such as Sierra Leone, from “land grabbing”.

Earlier in October, a brief flurry of attention from media and civil society surrounded the sessions of the Committee on World Food Security in Rome, where a stamp of approval on the guidelines on tenure of land, fisheries and forests was expected.

However, Olivier De Schutter, the U. N. special rapporteur on the right to food, said in an email following the meetings that details of conditions for large-scale investments remained an unresolved sticking point.

“Another major potential difficulty will be how the (voluntary guidelines) shall be followed up on,” said De Schutter.

Another week of negotiations should take place in January or February to hammer out a consensus on guidelines that will “hopefully” be adopted early next year.

“These are complex issues and I’m not surprised more time is required than expected,” said De Schutter. “I think it is remarkable we are heading towards a very detailed text despite the wide range of interests involved, in which decisions are made not by vote but by consensus.”

A September 2011 report by Oxfam International estimated as many as 227 million hectares of land in developing countries has been sold or leased since 2001. Most of that acquisition has occurred since 2008 and most has been into the hands of international investors, says the Land and Power report.

“There is a fear that arable lands will be scarce in the future and the price of land will continue to increase,” said De Schutter. “There is a sudden realisation that land is something that is in increasingly short supply.

“So there is now a rush for land.”

De Schutter said developing countries agree to sell or lease out large amounts of land in exchange for infrastructure and agricultural development – things cash-strapped governments could not afford on their own.

“They (feel) they have no choice,” said De Schutter.

And corruption remains rife in many countries, with local elites receiving kickbacks for land and inking agreements that benefit their own interests. Transparency International’s Global Corruption Barometer reported that 15 percent of people dealing with land administration services had to pay bribes.

Foreign direct investment to Africa continues to rise to unprecedented levels. The growth in production of biofuels, as well as carbon credit mechanisms and speculation, are key driving forces.

The majority of land deals in Africa are for export commodities, including biofuels and cut flowers, rather than food production, according to Oxfam International‘s report.

In Sierra Leone, a small West African country of about six million people that emerged from a long civil war in 2002, the democratically elected government of President Ernest Bai Koroma makes no secret of its desire to lure foreign investment.

In a recent presidential address, Koroma pointed out that agriculture contributes to nearly half the country’s GDP and a quarter of its export earnings, as well as employing about two thirds of the population.

“These private sector enterprises have not only made substantial investments in the agricultural sector but have created thousands of jobs for our people,” said Koroma, whose government offers an array of incentives and tax breaks to foreign investors.

According to a report by the California-based Oakland Institute in early 2011, nearly half a million hectares of Sierra Leonean farmland had been leased or was under negotiation, while the World Food Programme estimates that about half the population remains food insecure.

“Land is being cultivated for agrofuel production as opposed to food production for local markets, raising serious doubts about the value of investments for local food security,” says the report.

The report stressed the conditions “are ripe for exploitation and conflict” and called for international institutions and donor partners to withdraw support for large-scale land acquisitions in the country.

Earlier in October, dozens of people were arrested in southern Sierra Leone following protests against a land deal. Locals said they were not consulted or given information regarding the deal, which leased 12,500 hectares to a Belgian company, Socfin. More than 100 protesters blocked access to the site.

“Sierra Leone is very new in this business, the business of large-scale investment in land,” said Rahall. “I know there could be a balance, if it is properly thought out. But we have not, we’re just jumping into it without critical analysis, without proper research.”

He stressed any principles adopted internationally need enforcement in Africa and cannot be something companies just say they adhere to.

Employment and economic development is simply “the bell they ring to sweet talk people into accepting these things,” said Rahall.

A 2009 report, “Land grab or development opportunity? Agricultural investment and international land deals in Africa”, noted land acquisitions have the potential to result in loss of land for large numbers of people.

“As much of the rural population in Africa crucially depend on land for their livelihoods and food security, loss of land is likely to have major negative impacts on local people,” said the 130-page report by the U.N. Food and Agriculture Organization, the International Fund for Agricultural Development and the International Institute for Environment and Development.

“These may only partly be compensated by the creation of permanent or temporary jobs.”

De Schutter said benefits are rarely spread across the board to the most needy and decisions are not necessarily transparent or in the interests of the poor.

“In general, the development of plantations increases inequality, instead of decreasing it,” said De Schutter.

“The majority will not benefit.”

The guidelines on the security of tenure of land, fisheries and forests “could be a significant advance,” said De Schutter. “It can make it more difficult for governments to ignore the demands of the local community.”