BUENOS AIRES, Oct 24 2011 (IPS) - President Cristina Fernández’s smashing victory in Argentina, with nearly 54 percent of the vote, raises questions about how she will handle her growing supremacy. 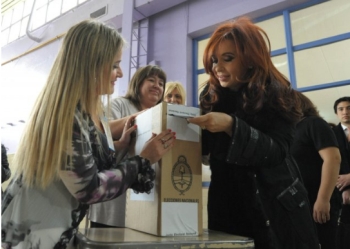 After the polls were closed on Sunday, the president, visibly moved by the outpouring of support she received, called for “national unity,” and said it was necessary to “avoid being distracted by useless confrontations.”

For the first time in the history of Argentina there will be a third consecutive government of the same political force. The first was the administration of Fernández’s husband Néstor Kirchner (2003-2007) – who died suddenly of a heart attack a year ago – and the second was the president’s current term.

With 98 percent of the precincts counted, Fernández took close to 54 percent of the vote, followed by 17 percent for Hermes Binner, the socialist governor of the eastern province of Santa Fe.

Fernández heads the Frente para la Victoria, a centre-left faction of the Justicialista (Peronist) Party (PJ) that she and her husband founded. But some observers are now talking about “Cristinismo” instead of “Kirchnerismo”.

That new movement, no longer influenced by Kirchner, is led by a president who is closer to the electorate and who will clash less with weak opposition parties than with right-leaning Peronist provincial “caudillo” or strongmen, analysts say.

And exit polls indicate that in the legislative elections, Fernández regained the working majority in both houses of Congress that she lost in the 2009 mid-term elections.

This could lead to increased concern about concentration of power, since the highly divided opposition fared very poorly at the polls.

In the campaign, many of the opposition candidates were short on specifics and new ideas and merely raised the spectre of a personality cult and of the control Fernández would have with an expected majority in Congress. They also alluded to the governing party’s alleged aim of taking steps to make it possible for the president to stay in power indefinitely.

They were referring to the possibility of moves to replace the presidentialist system with a parliamentary one that would make the indefinite reelection of a prime minister possible, since under the current system a president can only serve a maximum of two terms in a row.

Sociologist Artemio López with the Equis polling firm told IPS that “these fears are an exaggeration.” The governing faction, the Frente para la Victoria (Front for Victory) will not have an absolute majority of its own, he said, and to make such sweeping changes it would need the backing of allies that do not always vote in favour of its initiatives.

López said Sunday’s elections “do not represent a risk of hegemonic power, or anything close to that.”

After 12 member of the lower house of Congress defected from the Front for Victory in recent years, and in the wake of the opposition’s strong performance in the 2009 elections, the opposition majority managed to block the 2010 and 2011 budgets, and to freeze a government bill that would put a limit on foreign ownership of land.

Meanwhile, despite the poor showing of the Radical Civic Union – whose presidential candidate Ricardo Alfonsín came in third, with 12 percent of the vote – the centrist party will remain the second-strongest force in Congress.

There are some who believe the results of the elections could mark the start of a “Cristinista era,” sociologist Ricardo Sidicaro, author of “Los tres peronismos” (The Three Peronisms) and other political books, told IPS.

There is currently no Justicialista Party as such in power, said Sidicaro, a professor at the University of Buenos Aires, who said the Front for Victory is sustained by agreements with provincial branches of the PJ.

But, he said, these agreements are not strong enough to be called alliances. In fact, many provincial legislators do not consider themselves representatives of their party or their voters, but of the governors of their provinces, he added.

These groups have provincial leaders with presidential aspirations, said Sidicaro, such as the governor of Buenos Aires province Daniel Scioli, who was reelected on Sunday,

For now, the central government has kept these ambitions in check, thanks to Fernández’s strong support among voters and the flow of government funds to the provinces for public works and social policies.

But these caudillos are not completely loyal to the government at times of crisis or when the president’s popularity wanes, as occurred in 2008, when some of them abandoned Fernández.

In that respect, “Cristinismo” could be a movement that pushes through a constitutional reform to keep the president in power, or “it could be an opportunity to create a new party,” according to Sidicaro.

In either case, he said, the conflict would not be between the government and the opposition, but between the executive branch and the provincial governors with presidential aspirations who are not at all keen on the idea of the president finding a way to stay in power beyond the end of her next four-year term, in 2016.

Fabián Perechodnik with the Poliarquía consultancy firm said “a new stage” is beginning, in which Fernández will be “the only protagonist.”

“At first, her government had the stamp of Kirchner, and after his death it was his memory that marked her government, but now she is the exclusive figure in centre-stage,” he said.

That strong leadership role will allow the governing force to line up behind her, at least in the early years of her second term, which starts on Dec. 10 – until the end of her term nears and the fight for succession begins.