BHUBANESWAR, Oct 9 2011 (IPS) - As microcredit institutions – once touted as the vital ‘last mile’ in extending credit to poor rural women -fight a government backlash that has encouraged honest borrowers to turn defaulters, hopes for revival hinge on a new bill awaiting passage in India’s parliament. 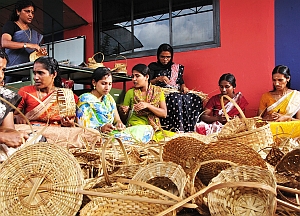 Far from repaying their debts, borrowers are now demanding that microfinance institutions (MFIs) pay them back for charging interest at thrice the advertised rates.

“The MFIs must refund us half of the loans that we took seven to 10 years back, because they have taken repayment twice over with interest,” says Vijaya Kasipati, 32, a woman borrower in the village of Lachapet in southern Andhra Pradesh state.

“While offering a loan, MFIs often quote a 10 – 12 percent ‘flat’ rate of interest, which appears like a good deal. But, this flat rate of interest is not calculated on the new, reduced balance,” explains Jamuna Paruchuri, advocacy director at the Andhra Pradesh government’s Society for Elimination of Rural Poverty (SERP).

“What the fine print says is that even after the borrower has paid a few instalments, the interest would still continue to be calculated on the initial sum borrowed, and not on the balance of the loan amount. The result is a hidden final rate of interest of around 36 percent,” Paruchuri told IPS.

SERP, which works with more than 11 million women in 994,595 self-help groups (SHGs) in 22 Andhra Pradesh districts, is eminently qualified to comment on MFI operations.

“The SHG women are not repaying. They say the MFIs have already taken repayments many times over by cheating them,” says Paruchuri, who, after a spate of suicides in 2010, was tasked with finding out from indebted women and their SHGs what went wrong.

Elaborating on the modus operandi of MFIs, Paruchuri says loans are recovered on a weekly basis and follow 52-week time schedules. “By the 25th week when the borrowers would have repaid half the loan with interest, the MFIs convince them to take a second loan – often the very same repaid amount.

“As a result, the borrowers go on paying interest on the initial total sum borrowed, plus on the second loan, and end up paying 72 percent interest.”

“In effect the borrowers got caught in a debt trap says,” says Sudhirendar Sharma, a former World Bank consultant. “Although the original idea of microcredit was to save poor rural people from the clutches of local moneylenders, many of them ended up being hopelessly indebted to a new class of moneylenders.”

With debt-ridden farmers committing suicide in droves, the Andhra Pradesh government was compelled to move legislation in the state assembly on Oct. 14, 2010, banning the weekly collection of repayments by thuggish agents hired by the MFIs.

The Andhra Pradesh Micro Finance Institutions (Regulation of Money Lending) Ordinance, 2010, in its preamble, talked of the need to protect the interests of the SHGs which it acknowledged were “being exploited by private MFIs.”

Repayments plummeted overnight and the commercial banks, which lent money to the MFIs, stopped further disbursements. As the MFIs stopped lending, they also retrenched staff and the sector quickly plunged into a crisis.

Worse, impoverished farmers were driven back to traditional moneylenders for badly needed credit.

“As the last mile, door-step credit provider in rural outbacks where banks do not want to operate, we are irreplaceable,” says Mohammed Nooruddin Amin, chief of Adhikar, a non-government organisation based in Orissa, which launched a microcredit arm in 2004.

“The long-winded procedures that banks follow for sanctioning loans deter the poor and uneducated from approaching them,” he added explaining the indispensability of MFIs.

Amin blames ‘for-profit’ MFIs for the crisis in the sector. “MFIs with a social background like Adhikar hold only around 30 percent of microcredit portfolios, while the for-profits hold a much larger proportion and are under pressure to make bigger profits by investors and shareholders.”

But the repercussions for usurious practices have fallen equally on the not-for-profits. Adhikar has faced massive defaults since the October 2010 state government intervention. “Borrowers held back repayments on rumours that the central Reserve Bank of India would move to waive all MFI loans,” says Amin.

Amin and other development activists are, however, optimistic for the future of MFIs and believe that tight legislation holds the key.

“We (not-for-profit MFIs) too have learnt lessons from this sectoral shakeup,” Thomas admitted.

Activists say some of the steps that can be introduced to salvage the MFI sector include banning multiple lending, bringing about greater transparency, slashing interest rates and monitoring the end-use of loans.

“The new bill must recognise the extraordinarily high cost of doing microfinance in the door-step, weekly-repayment model. If the margin is too thin, MFIs cannot address diverse requirements of the poorest of poor groups,” says Amin.

The weekly collection system is now generally considered to be a bad idea. “Even those given loans to buy cattle were asked to repay from the very next week when income could only come in months later,” Amin said.

Paruchuri, however, insists that “poor women do not need the MFIs,” and that the Andhra Pradesh regulations actually worked to protect vulnerable women like Savitri Edulu from avaricious MFIs.

Edulu, 40, who used to make beedies (hand-rolled reefers) for a living in Lachapet was lured by an MFI agent to sign a few papers against a commission of 25 dollars. The agent then used the signed papers to borrow 2,500 dollars from five different lenders.

When confronted, the agent shrugged off all responsibility and insultingly told Savitri to “go sell her body” to repay the loans.

“It would be a shame if the new Micro Finance Institutions Bill 2011 is passed in the parliament without taking such loopholes into consideration,” says Paruchuri, referring to reports of hard lobbying by the MFIs for a law that is favourable to their interests.