MEXICO CITY, Oct 14 2011 (IPS) - The global food crisis, which threatens to aggravate hunger and poverty, makes it necessary for agriculture to diversify, adapt to climate change and raise productivity, say FAO and experts. 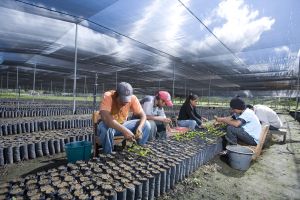 The report, currently available only in Spanish, warns that food prices, which have hit record highs, could continue to climb and remain extremely volatile.

This jeopardises the advances made in the fight against hunger and child malnutrition in the region, says the report, released ahead of World Food Day, Oct. 16, and the International Day for the Eradication of Poverty, Oct. 17.

For major food producer countries such as Argentina, Brazil and Mexico, the present situation could increase the value of their exports, while suppliers of minerals, oil and gas such as Bolivia, Chile and Peru could offset costly food purchases thanks to the high prices of oil, copper or gold.

The countries of Central America, however, are hit hard by the high cost of food.

In Guatemala, where half of the population of 14 million lives in poverty and 17 percent in extreme poverty, according to United Nations figures, the food situation remains precarious.

Rony Palacios with the non-governmental National Network in Defence of Food Sovereignty in Guatemala (REDSAG) told IPS that the measures taken by the government to counteract food insecurity have been “ineffective, and do not address the structural problems.

“Trade agreements are signed, allowing subsidised purchases of food like rice, corn and wheat – crops in which we were self-sufficient in production, whereas now we depend on imports of those products, which has led to a loss of food sovereignty,” he said.

In Latin America and the Caribbean, hunger affected 52.5 million people last year, or nine percent of the total population.

That was 600,000 fewer than in 2009 – a drop due to policies implemented by governments to combat the problem which, however, have brought uneven results.

Brazil is recognised as a global leader in food security, thanks to the Zero Hunger plan launched by left-wing President Luíz Inácio Lula da Silva (2003-2010) and continued by his successor and fellow Workers Party member Dilma Rousseff, under the name Brazil without Extreme Poverty.

“The progress made has been due to important public strategies that turned efforts by society into state, not just government, policies,” Francisco Menezes, the director of the Brazilian Institute of Social and Economic Analyses (IBASE), told IPS.

Two decades ago, Brazil had “disturbing” levels of hunger, said Menezes, who presided over the government’s National Council on Food Security.

In 2010, the legislature modified the Brazilian constitution to declare adequate food and nutrition a human right.

Meanwhile, Dolores Rojas, Oxfam Mexico campaigns coordinator, said the region “is starting to discuss the need for changes in the products that are grown, but there is no planning, and much less coordination with producers.”

The Mexican Congress followed in Brazil’s footsteps when it passed, in May, a constitutional reform establishing the right to food, which was not published in the official gazette until Thursday Oct. 13.

In Guatemala, a National System of Food and Nutritional Security, with a national council and secretariat, was created by law in 2005. However, Luis Monterroso, with the right to food unit at the office of Guatemala’s human rights ombudsman, told IPS that “we have very strong legal instruments, but unfortunately they are dead letter.”

The FAO report says the region has not shown problems of availability of food, and that the projections for 2011 are generally favourable, with the exception of cereals, where a slight decline is expected.

The high cost of food, however, represents an opportunity for higher incomes for family farms, says FAO. But for that to happen, it adds, policies boosting the productivity of family agriculture and improving conditions for market insertion and access to inputs and financing are needed.

Family farms are the greatest source of employment for the rural workforce in Brazil.

In Mexico, some five million people – out of a total population of 112 million – depend on family agriculture, which has an average farm size of six hectares. Family farms represent 39 percent of total agricultural production and 70 percent of jobs in agriculture, FAO reports.

The government is running three programmes of support for agriculture, which have not had clear benefits for small farmers.

Family agriculture is important, said Monterroso, because families “can grow their own food, mainly in terms of staples like corn and beans, although their reserves only last between five and seven months.

“If the state offered support to these campesinos (peasants), their production levels and ability to feed themselves could grow; but the export-oriented model continues to be backed,” he complained.

FAO suggested measures like the generation of mechanisms for global and regional governance of food and nutritional security, the transformation of production and consumption patterns, greater transparency in the international markets, more dynamic local markets, and the adaptation of agriculture to climate change.

“Adaptation to climate change and support for family agriculture are not priorities,” said Oxfam Mexico’s Rojas. “The government’s attention is on large-scale agriculture and imports as a policy, which puts us in a vulnerable situation at a time of crisis.”

Still pending in Brazil are “new issues, the most visible of which are the contamination of foodstuffs – this country is the world’s largest consumer of toxic agrochemicals – and price volatility, which is caused by food being treated as merchandise, subject to speculation on futures markets, which has a major impact on prices,” said Menezes.

* With reporting by Danilo Valladares in Guatemala City and Mario Osava in Rio de Janeiro.