UNITED NATIONS, Oct 31 2011 (IPS) - Hailed as economically viable and socially responsible, cooperatives have over one billion members worldwide and can be found in sectors ranging from agriculture to finance to health. 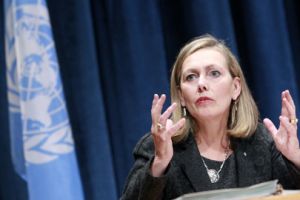 Monique Leroux, President and CEO of the Desjardins Group, speaks about the financial crisis and the role of cooperative banks. Credit: UN Photo/Rick Bajornas

Yet for an economic model deemed so vastly beneficial, cooperatives have received surprisingly little attention from both the media and governments, experts agree. By dubbing 2012 the International Year of Cooperatives (IYC), launched today in New York, the United Nations is attempting to reverse this trend and instead shine a global spotlight on cooperatives.

The U.N., along with its Department for Economic and Social Affairs (UNDESA) and the Committee for the Promotion and Advancement of Cooperatives (COPAC), has three main goals for the year.

It aims to increase awareness about cooperatives and their contributions; to promote the formation and growth of cooperatives; and to encourage member states to develop policies conducive to cooperatives’ growth.

The long history of cooperatives dates back to Europe in the 1800s.

In Germany in the 1860s, Friedrcih Raiffeisen designed an innovative savings and credit cooperative to help farmers. His idea of a rural cooperative bank spread to other parts of Europe, while around the same time Schultze-Delitsch founded a similar bank for more urban parts.

Retail consumer cooperatives began springing up among textile workers in the 1840s in Britain during a time of economic hardship. By the 1950s, these cooperatives comprised 12 percent of the retail trade.

Today, cooperatives have approximately one billion members in over 100 countries.


Cooperatives, no matter the sector, are widely viewed as successful enterprises for a number of interrelated reasons. One is that they are member driven, meaning that the very members cooperatives serve are the ones making the decisions about the institution.

Furthermore, because they are member driven, cooperatives are not profit-maximising enterprises. Rather, the pursuit of profit is balanced out by the needs and decisions of members, who can become fully involved in the governance of the cooperative.

Cooperatives “can make longer-term investments and better reflect the multiple bottom lines that users, owners, employees and neighbours will recognise as important,” Michael Gertler, acting director of the Centre for the Study of Cooperatives at the University of Saskatchewan in Canada, told IPS.

As a result of these characteristics, cooperatives are regarded as having impressive longevity. The survival rate of start-up cooperatives is also higher than those of private sector competitors.

The potential of cooperatives to help eradicate poverty as well as create and reinforce sustainable practices while contributing to development is precisely what the U.N. wants to highlight and encourage states to tap into.

A primary struggle of the U.N.’s development agenda has been to highlight the human aspect of development and wealth, rather than the financial elements. Cooperatives combine both, making them a highly desirable economic and business model.

Cooperatives “empower individuals to organise themselves into self- help enterprises”, said Under-Secretary-General for Economic and Social Affairs Sha Zakang. They also “promote cooperation at a grassroots level”, he said during a breakfast meeting with members of European cooperative banks.

Sha noted later on during a round table discussion that because developing a green economy will require “radical shifts” in the way humans produce and consume energy, cooperatives play a valuable role in the transition to a green economy by creating economically and socially sound practices.

“How can cooperatives be best utilised to advance a people-centred approach to sustainable development?” he asked rhetorically. He underscored the importance of cooperatives to the U.N.’s development agenda and its Millennium Development Goals (MDGs) by 2015.

Gertler affirmed this point, noting that cooperatives “have the potential to be excellent vehicles for making the… transition to sustainable production and consumption”.

Daniela Bas, director of DESA’s Social Policy and Development Department, similarly noted that by being a “value-driven, people- centred model of enterprise”, cooperatives can positively affect particularly vulnerable populations such as indigenous peoples and rural communities.

Yet despite the high value placed on cooperatives for both the model and the potential they offer, cooperatives have largely fallen under the global radar.

One area where cooperatives have outshined the more mainstream private businesses is in the financial sector. A 2009 report by the International Labour Organisation (ILO) sang the praises of cooperative banks, finding that while the economic crisis hurt the majority of enterprises, “cooperative enterprises around the world are showing resilience to the crisis”.

Not only does the cooperative model of enterprise “survive crisis”, the report elaborated, but it is also “able to withstand crisis” while “maintaining the livelihoods of the communities in which they operate”.

“The recent massive public bail-out of private, investor-owned banks has underlined the virtues of a customer-owned cooperative banking system that is more risk-averse and less driven by the need to make profits for investors and bonuses for managers.”

Ultimately, the report argued, “it is the strength built up by cooperatives during the good times that helps tide them over a recession.”

Any resilient organisation that can weather a recession would seem invaluable in the current economic climate. Yet cooperatives are not given the proper attention that would allow them to flourish, argued Jack Wilkinson, farmer and president of the World Farmers’ Organisation, at a round table this morning. He called for the cooperative sector to be given the support to become more mainstream, so that they do not remain on the fringe.

Piet Moerland, chair of Rabobank and president of the European Association of Cooperative Banks, and Pauline Green, president of the International Co-operative Alliance, echoed this sentiment at a press briefing.

Both emphasised how little known cooperatives are – neither the number of people involved in them nor the market value they contain.

“The cooperative business model is, in my view, underestimated in the media,” Moerland said. He added that it is similarly underestimated by legislators and in regulatory frameworks.

“Co-ops do not compete in the same way as conventional corporations,” said Gertler. “Governments need to understand their proven role in providing financial and economic stability, especially for more vulnerable populations and places,” he concluded.