TLAXCALA, Mexico, Oct 12 2011 (IPS) - Adelaida Avelino, 60, is still devastated by the loss of her corn and wheat harvest, which were destroyed by the freeze that hit the Mexican state of Tlaxcala a month ago. But at least her medicinal plants survived. 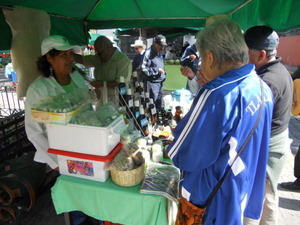 Adelaida Avelino (in the baseball cap) with customers at her market stall. Credit: Emilio Godoy/IPS

“Some were hurt, others are very resistant. But the corn and wheat crops are beyond recovery and we don’t know if the government will give us any support,” Avelino, from the village of Españita, a few km from Tlaxcala, the capital of the small central state of the same name 130 km southeast of Mexico City, told IPS.

Like another four dozen local farmers, Avelino goes every week to the Alternative Market of Tlaxcala, which operates in a central square in the city, offering campesinos or small farmers from the area around the state capital a place to sell their crops.

At the market, she sells ointments and potions based on medicinal plants like absinthe, camomile, salvia, rue, arnica and aloe vera, which she grows in her backyard garden.

Avelino’s case is an illustration of the difficulties faced by rural women in Mexico who since 2008 have suffered the combined effects of the economic, food and climate crises, compounded by the spiral of drug-related violence in different regions in this Latin American country.

Some 13 million women live in rural areas in Mexico, out of a total population of 112 million. Of them, 25 percent live in communities of less than 2,500 people, according to the National Women's Institute.

Since 2008, poverty has risen again in Mexico, to a total of 52 million people, as part of a phenomenon that hits women, and especially rural women, particularly hard.

For every 100 men living in poverty, there are 115 women, according to the National Council for the Evaluation of Development Policies. In addition, poverty rose at a faster rate in the countryside than in urban areas between 2008 and 2010 – from 62.4 to 64.9 percent in rural areas and from 39.1 to 40.5 percent in the cities.

In Latin America's second largest economy, 39 percent of the country's 19 million households are rural, and 11 percent of these – 852,000 – are headed by women, and are mainly poor.


In the face of their hardships, women have come up with ways to organise themselves to tackle the problems they face as small-scale farmers, such as collectives that defend their rights.

“Women are finding that there is less food, and of lower quality,” Rosa Govela, a member of the National Network of Rural Promoters and Advisors (RedPar), told IPS ahead of the International Day of Rural Women, celebrated Saturday Oct. 15.

“They have diversified their work on their plots of land and in their backyard gardens,” said the rural organiser, whose group works for the rights of rural women in Mexico. “They also have to do all of the domestic work in the household, while they have to farm their plot of land and find extra work to boost their incomes.”

A study drafted by RedPar in 2009, “The impact of the food crisis on low-income rural women in Mexico”, concluded that the workload of rural women is growing heavier while their incomes remain stagnant, their food consumption is shrinking, and they are hit hard by the combined effect of declining prices for their products and rising prices of basic items like cooking oil and meat.

In 2010, the collective followed up on the study with the report “Resistance and strategies by rural women in the face of the food crisis, climate change and migration”, which took an in-depth look at measures that rural women have adopted to deal with the different facets of the crisis.

“There is a movement in which families are organising in the production of crops, both for their own consumption and for sale,” Clara Sánchez, with the Integrated Rural Development Project (PRODERI) of Vicente Guerrero in Tlaxcala, told IPS.

“We have to work in the areas of food supplies and gender equality. We can’t leave the entire burden on the shoulders of women; men and children must also participate,” she added.

PRODERI, which emerged in 1990, has trained local women in agroecological, soil use, and biofertiliser techniques. In their backyard gardens, they grow vegetables, medicinal plants and fruit, and raise chickens and pigs.

The Alternative Market, established in 2005 as part of the Network of Tianguis (open air markets or bazaars) and of the Organic Markets of Mexico, is one of the results of the rural organising process and has provided a place for campesinos to directly sell their products to the public.

It opens every Friday at 7:00 AM, and rural producers sell fresh produce as well as cheese, eggs, crafts, grilled lamb, and traditional corn-based dishes, for on-site consumption or take-out.

The next goal is for the vendors to have a seal certifying that their produce is organic, the women farmers explained to IPS during a tour of the square where the weekly market is held.

A few metres from Avelino’s stand, 49-year-old María Carvente works over a gas stove, along with her mother, her daughter and two assistants. They are preparing quesadillas, a typical Mexican food, which Carvente and her family make with mushrooms grown in a greenhouse in the nearby community of Zacatelco.

“One of our neighbours was growing them, we saw how she did it, and we started in 2006,” Carvente told IPS. “Demand is high, and now we want to create our own trademark and set up a laboratory to improve production,” said the campesina, the head of her household since she separated from her husband.

She has managed to expand the family business with an 11,000 dollar loan from the government.

Every month, Avelino produces 30 small jars of ointment and three litres of medicinal potions. With her weekly earnings, she bought an herbal extraction machine for 660 dollars.

“This way we can save up and produce more,” said Avelino, a mother of five who got involved in the herbal extract business in 1999 to boost the meagre and volatile income from the small plot of land that her husband manages with the help of the entire family.

Every day, Carvente harvests 40 to 50 kg of mushrooms from her 84-square-metre greenhouse.

“Women are not sitting with their arms crossed. In the backyard gardens they work hard, save up seeds and make an effort to grow their produce without agrochemicals. In some regions we have seen that they make joint purchases in bulk and find ways to guarantee corn supplies,” Govela said.

In the RedPar studies, the campesinas set forth seven specific proposals, including incentives for growing staple foods in their backyard gardens and on their plots of land, fighting for a fair price for their products and for the recognition of the rights of rural and indigenous women, and defending and protecting seeds and natural resources.

“Living standards have improved, including broader health care coverage and higher incomes. Working the land gives them an identity, patrimony and culture,” Sánchez said, referring to the benefits reaped by the campesinas who participate in the market in Tlaxcala, Mexico’s smallest state.