NEW YORK, Oct 24 2011 (IPS) - Ninety percent of the non-governmental organisations in Mexico are founded and run by women, says journalist and women’s rights activist Lydia Cacho Ribeiro, even as crimes against women remain cloaked in impunity. 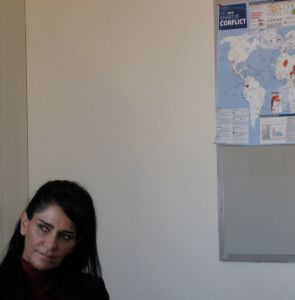 Cacho was recently in New York, where she was awarded the Civil Courage award from the Train Foundation, and also spoke at a special event hosted by Columbia University.

When Felipe Calderón became president in 2006, he deployed the military in a federal offensive against drug cartels and criminal groups, resulting in a virtual war in which more than 40,000 people have died. In 2010 alone, the death toll exceeded 15,000, according to Reporters Without Borders.

Human rights abuses and violence against women are widespread in Mexico, perpetrated by all actors in society, including the military and police.

Nine out of 10 women in Mexico who suffer human rights violations do not report it to the authorities, and “those who (do) report them are generally met with suspicion, apathy and disrespect”, according to Human Rights Watch’s latest country report.

“The normalisation of gender violence is increasing incredibly,” Cacho said.

Even though some legal measures have been put in place to prevent and punish gender-based violence, the implementation has been very limited and impunity remains the norm for murder or other crimes against women, according to human rights groups.

However, Cacho stressed that there is a growing feminist movement in Mexico to empower women and to discuss gender violence, including that perpetrated by the military.

“The problem right now in Mexico, regarding this discussion, is that the Mexican government is so obsessed with the media, with the main media that is pretty much linked with war discourse, that everything has to do with the war against drugs. And they won’t talk about human rights (even) if we want to take back the conversation about gender violence,” she said.

Cacho said the military is involved in abuses such as human trafficking, and police occasionally attack women’s shelters, either because they have a personal connection to a woman in the shelter or because they want to protect the traffickers.

Ten years ago, she founded such a shelter for women and their children who are fleeing various kinds of gender violence, called the Women’s Assistance Centre (Centro Integral de Atención a la Mujer) in Cancún. It started mainly as a refuge for victims of domestic violence, but it soon became clear that most of the women had been involved in trafficking, especially forced prostitution.

The centre now has high security, with a barbed wire fence and cameras everywhere to keep the women safe.

Cacho recounted how the shelter was attacked by police who came to retrieve the wife of a policeman, whom she had helped to flee an abusive situation. The police didn’t get inside, and the attack was caught on film, but when Cacho sought accountability and showed the tape to the district attorney, she said he told her “that there isn’t much we can do, (and) the best thing you can do is just to close down”.

Perseverance in the face of death threats

In the last decade, 80 journalists have been killed in Mexico, according to Reporters Without Borders, and many journalists and human rights defenders have been forced to flee the country or censor themselves.

Cacho chose to do neither. She has investigated gender violence and sex trafficking and published numerous stories and books on the subject. Her 2005 book “The Demons of Eden” exposed an international child pornography and sex trafficking ring in Cancún which involved senators and politicians.

She was thrown in jail and tortured for publishing that book. When she finally came out and started talking, the government tried to label her a terrorist, but without success. She traveled for six years to investigate the world of international sex trafficking of women, resulting in her latest book “The Slaves of Power” in 2010.

Together with non-governmental organisations and a grassroots activist network, Cacho started a prevention campaign called “No estoy en venta” – “I am not for sale” – against sex trafficking that includes a video to give young people tools they need to protect themselves. The video explains anti-trafficking laws, the tactics traffickers use to lure their victims, and other aspects of the issue.

“It is getting away from discourse of fear and moral panic and all this (crap) and going back to the discourse of ‘you have the power of the information, use it for your own good and how to protect yourself and other kids in school’,” she stressed.

But her fight has not come without a price. Cacho told IPS that she has a lengthy checklist of safety strategies she must adhere to in her daily life because of the threats she receives, such as using a different name to make hotel reservations when she travels and constantly switching phone cards.

“I guess right now in Mexico my biggest challenge is to stay alive,” she said.

She could have given in to fear and stopped doing what she does, after being tortured and having survived a murder attempt in her car while she was driving with friends and her husband, but she chose another path.

“I guess one day I just understood that, one of the things they do, like the mobsters, the government officials… is to put a lot of pressure for me to live in such a state of fear,” she said.

“So one day I said, what the hell, they won’t be able to do it. It’s just the last of my liberties is that, is my freedom. If they take away my job, and the way I am as a citizen and as an activist, they would be taking my freedom away, and I won’t let them.”