Q&A: Carving Out a New Aid Order at Busan

MONTREAL, Canada, Oct 4 2011 (IPS) - Busan represents the possibility of an aid revolution – a time in history where an encompassing, inclusive aid framework may be possible. This is according to Tony Tujan, director of IBON International, a capacity development non- governmental organisation. 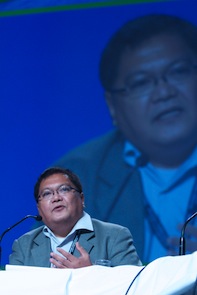 In late November international aid players will descend on Busan, South Korea to review past aid effectiveness commitments before writing the next chapter in the fight for better aid.

At the forum, delegates will assess the world’s progress against previous aid agreements, the Paris Declaration on Aid Effectiveness and the Accra Agenda for Action – before issuing yet another.

The 2005 Paris Declaration laid out targets to improve the quality of aid and its development impact, establishing monitoring systems to assess progress and accountability. Three years later, in an effort to accelerate progress on the declaration, the Accra Agenda was drafted in the Ghanaian capital. The document proposed increased national ownership of development process, more inclusive partnerships and measurable impacts.

These were a start but Busan’s outcome document must go further to ensure sustainable, equitable and inclusive aid, according to Tujan who also co-chairs the civil society platforms BetterAid and Reality of Aid.

While the International Monetary Fund (IMF) uses the global recession as a rationale for continued conditionality, rising powers such as China, India and Brazil involved in South-South development cooperation may be unwilling to permit the continuation of a Northern-dominated aid architecture, he cautions.

With the rise of South-South cooperation, now is the time to pen a more equitable future for aid, said Tujan.

Ahead of the high-level meeting, Tujan spoke to IPS about the state of aid effectiveness and the possibility of a new aid order at Busan.

We need a strong results agenda but this should be human rights- based. It is not so much how the programmes are implemented, what is more important is that the implementation of aid programmes clearly result in the poor and marginalised, and people in general, in claiming their human rights.

The third is the question of aid architecture. We need to come up with a new document and a new institution that is more equitable, which will accept shared leadership and not impose leadership by developed countries or even the G20 (group of major industrialised and emerging nations).

Q: What will you be hoping for in Busan? Aid effectiveness as (defined by) the Paris and Accra commitments is not sufficient and will not deliver results. Busan is at an important point in history where … an encompassing framework for development cooperation is possible. (Aid) should be about the traditional donors but it should also include the so-called “new donors” … developing countries who, one way or the other, are engaged in South-South development cooperation. It should include the totality of civil society and other private actors. Within the last two years, many governments are actually talking to civil society platforms about their development programmes, policies, aid programmes and so on because of the aid effectiveness process. In some countries – Indonesia, Philippines, Senegal – civil society is not simply consulted (but) they have been made members of the bodies that oversee aid.

Q: How likely is it that we will come out of Busan with this new architecture? A: In the full form? 50-50…Whether it will meet the overall definition of an equitable, inclusive aid architecture – that remains to be seen.

Q: What are the political challenges? A: Politically, you can fit it down to one country, China – and the G77 (the largest single coalition of developing countries). Will these countries accept a Busan compact that is premised on South-South cooperation where China commits to the aid effectiveness of its support to other countries?

If we have a Busan outcome document that is such, it will radically change the future of the OECD (the Organisation for Economic Co-operation and Development) because now we will have a new animal that is not the OECD where aid can be mediated in a more equitable fashion.

China and the G77 are conscious that the leadership of the OECD Development Assistance Committee (DAC) is very much premised on the political and economic interests of those countries. They will not subsume their efforts under that leadership.

In this case, it is an objective shared even by the DAC. The DAC wants China in, it wants everyone in and apparently they (the DAC) are aware of the consequences of that happening or where it will lead.

You do not need conditionalities if you have the right processes (and) democratically negotiated compacts are made. If you have such democratic processes where citizens are not only consulted but involved in the process of creating the modalities for assistance then these do not become imposed conditionalities. Even then there could be mechanisms to reduce, let us say, the power of the conditions and yet be able to achieve policy reform.

IMF policies are premised on neoliberalist prescriptions and that is why we believe that conditionalities should be ended. We did not get that in Accra, chances are we will not get that at Busan because the IMF is moving heaven and earth to kill that demand.