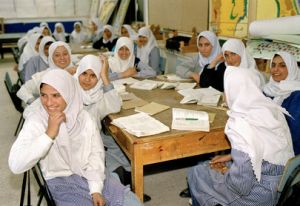 But since their inception back in 1901, the prestigious awards have failed to celebrate some of the resounding successes in a key sector on the U.N.’s political and social agenda: education.

The Qatar Foundation, presided over by Sheikha Moza bint Nasser, has stepped in to create the world’s first major international prize for education – one of the highest priorities of the U.N.’s eight Millennium Development Goals (MDGs) which call for universal primary education by 2015.

The new prize will reward an individual – or a team of up to six individuals working together – for an outstanding contribution in the field of education in a world dominated by digital technology – and inhabited by nearly 800 million illiterate people.

Cecilia d’Oliveira, executive director of OpenCourseWare (OCW) at the Massachusetts Institute of Technology (MIT), told IPS educational needs worldwide are so vast and contribute to so many other issues of concern – public health, economic development, environmental impacts – that it can only be a good thing to bring Nobel-type attention to those who have made significant contributions.

“Hopefully, this award will bring focus and attention to the goal of improving education worldwide,” said Oliveira, who participated in the last two summits in Qatar.

The winner or winners of the award will be announced at the third annual World Innovation Summit for Education (WISE), scheduled to take place in the Qatari capital of Doha, Nov. 1-3.

A 11-person prize committee will present a short list to a jury of five distinguished individuals, including Professor Jeffrey Sachs, director of the Earth Institute at Columbia University, Dr James Billington, librarian of the U.S. Congress and former director of the Woodrow Wilson International Centre for Scholars, and Sheikh Abdulla bin Ali al-Thani, chairman of WISE and the Qatar Foundation.

Launched in 2009, WISE is an initiative of the Qatar Foundation for Education, Science and Community Development and supported by a network of six partners: Agence universitaire de la Francophonie (AUF), the Association of Commonwealth Universities (ACU), the Institute of International Education (IIE), the International Association of University Presidents (IAUP), RAND Corporation and the U.N. Educational, Scientific and Cultural Organization (UNESCO).

The award comes at a time when the United Nations is warning of a growing crisis in education: a global shortage of over 6.1 million teachers which must be urgently addressed to meet the U.N.’s development goal for universal primary education by 2015.

According to UNESCO, sub-Saharan Africa accounts for more than half, with a gap of some three million teachers. At the same time, an estimated 69 million children have been left out of primary schools worldwide.

Asked if the Qatar summit is one-of-a-kind in terms of providing a platform for academics and educationists to come up with innovative solutions to the challenges facing the educational sector, Oliveira told IPS that WISE is unique in several ways.

The summit brings together over 1,000 thought leaders and practitioners from multiple sectors, including government, education and entrepreneurs, all of whom share an interest in identifying and sharing innovative new approaches to improve education, she said.

“The size, diversity, and prominence of the audience is unique for an education event,” she said.

“Summit participants are exposed to new ways of thinking, they hear about success stories, learn about innovative trends, and get connected with other people who are doing interesting and innovative things in education,” she added.

It is a very exciting and inspiring event that provides lots of opportunity to get connected, become more informed, and share stories with other people from around the world, Oliveira noted.

With an additional 40 million children out of schools owing to conflicts, the summit will also place high priority on these children’s education.

Asked about children caught up in conflict situations, Radhika Coomaraswamy, U.N. under-secretary-general for Children and Armed Conflict, told IPS half the children who have no access to primary education live in conflict-affected areas.

In July this year, the Security Council passed a resolution to make attacks on schools a ground to be listed as a named party in the annexes of the secretary-general’s report on children and armed conflict, thus opening up the possibility of bringing sanctions against them.

“We are campaigning to make schools zones of peace since children are often recruited from schools. We are also trying to make education a necessary part of the emergency response to humanitarian situations,” she added.

Asked about some of the success stories since the last two summits, Oliveira said the meeting is “a wonderful opportunity for educators to have their hard work and innovations recognised”.

She said the MIT OpenCourseWare recognised diverse and innovative projects around the world such as The Citizens Foundation (Pakistan), Save the Children’s ‘ReWrite the Future’, Mother Child Education Programme (Turkey), the Smallholders Farmers Rural Radio (Nigeria), and others.

She said most of the projects “were addressing completely different education problems than we were, and operating with more limited resources”.

MIT’s OCW provides free and open access to over 2,000 courses, while other institutions have followed suit with more than 13,000 courses, according to Oliveira.

She said about 70 million people have used the MIT content since its launch, and about a million use it per month.

Oliveira pointed out that 10 percent of these are educators, 42 percent students and about 43 percent independent learners.

“I cannot imagine how else such projects would be recognised at the level the WISE awards provide. I hope the Qatar Foundation continues to support and expand this as an annual global event,” she said.