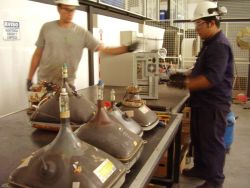 Workers at Gestión Ambiental, a company devoted to the collection, treatment and final disposal of electric and electronic waste in Buenos Aires. Credit: Juan Moseinco/IPS

BUENOS AIRES, Nov 22 2011 (IPS) - The shop is filled to bursting with buyers. One by one, customers follow a salesperson to one of a row of booths where they are provided with a wealth of information on the mobile phones for sale. But nobody tells them what to do with the old phones they are replacing.

This scene is replayed every day in the two-floor retail store operated by the mobile service provider Personal in the municipality of San Isidro, in the province of Buenos Aires, and in other shops throughout Argentina, which is experiencing a boom in the consumption of electronic goods.

Mobile phones are now being replaced in Argentina after an average of only two years of use.

With a population of 40 million, Argentina has 34.3 million mobile subscribers, a figure that rises to 56 million if you add the mobile numbers that are no longer in use but have not been canceled, according to the Argentine branch of the environmental organisation Greenpeace.

The upsurge in mobile phone sales over the last five years has sparked concern over the volume of toxic substances released when the devices are disposed of alongside household waste.

“What should I do with my old phone?” Tierramérica asked a saleswoman at the shop in San Isidro.

“Keep it as a backup, in case the new one breaks,” she suggested.

“But the old one doesn’t work anymore.”

“I don’t know,” said the saleswoman with a shrug. “We don’t take back old phones.”

Greenpeace Argentina activist Yanina Rullo told Tierramérica that around 40 percent of the public is aware that old mobile phones are a potential source of toxic pollution, and they keep them stored at home. Another 30 percent simply dispose of them with regular trash, which means they end up in landfills or dumps.

Greenpeace is one of the most active promoters of a bill currently being studied by the Argentine Congress on the management of waste electrical and electronic equipment, which has already been passed in the Senate.

The proposed law would place responsibility for the recycling or safe final disposal of electronic devices on the companies that place them on the market. But the passage of the bill has reached a standstill in the lower house of Congress.

According to Greenpeace Argentina, in 2010 alone, around 12 million mobile phones were sold, along with 2.6 million computers, one million television sets and 1.2 million printers.

And as new equipment is purchased, old equipment is tossed aside. In one year, 10 million mobile phones are thrown away, and when they break down, they release highly toxic substances and heavy metals that contaminate the air, soil and water tables.

Argentina generates three kilograms of electronic waste or e-waste per capita annually, which means a total of 120,000 tons of contaminating waste, of which less than two percent is recycled.

In Latin America as a whole, an estimated 800,000 tons of e-waste pile up every year, according to “Los residuos electrónicos: Un desafío para la sociedad del conocimiento en América Latina y el Caribe” (Electronic Waste: A challenge for the knowledge society in Latin American and the Caribbean), a 2010 report published by the United Nations Educational, Scientific and Cultural Organisation (UNESCO) office in Montevideo.

This estimate was reached on the basis of reports from Argentina, Brazil, Chile, Colombia, Mexico and Venezuela, where more than 80 percent of the region’s e-waste is produced.

But despite this huge volume, none of the region’s countries has adopted integrated legislation to respond to the problem. Instead, there are isolated initiatives aimed at the reuse or safe final disposal of these discarded products.

With the economic growth of the last decade and the efforts to reduce the so-called digital divide in countries like Argentina, Colombia and Uruguay, where the widespread use of laptop computers is being actively promoted, there is clearly an urgent need for legislation.

The Argentine bill, modeled on a European Union directive, establishes individual producer responsibility for the final disposal of waste equipment and the reuse and recycling of components.

The draft legislation also establishes incentives for manufactures to design easily recyclable devices that are free of toxic substances and with the longest possible useful life, as well as proposing a national system for the safe disposal of e-waste. It also calls for the creation of e-waste collection centres in all municipalities with more than 10,000 inhabitants.

Some companies have voluntary programs for the withdrawal of obsolete products from the market, but they are scarcely publicised, and not even their own employees know enough about them to inform customers.

In Argentina, a company called Escrap handles waste electronic equipment from large companies, resulting from production flaws or changes in technology, but does not deal with e-waste generated by individual users.

“We work with a very small percentage which includes products that are damaged during the manufacturing process or that break down while they are still covered by a warranty, but for the bulk of the equipment discarded, a law is needed,” Escrap owner Gustavo Fernández, a biologist and environmental management specialist, told Tierramérica.

Fernández, who collaborated in the drafting of the Argentine bill, explained that there are electronic waste products that have some economic value, such as components made from iron, steel, aluminum, copper, precious metals and plastics, while there are others that do not, like rechargeable batteries.

For some highly contaminating types of e-waste, such as rechargeable batteries or circuit boards, the necessary recovery technology is not available in Argentina, which means they must be exported to specialised treatment plants in other countries.

Almost 30 percent of the weight of a battery is made up of toxic materials like cadmium, nickel and lithium. A personal computer can contain more than 50 harmful components.

But, according to Fernández, of all e-waste products, mobile phones are among the most dangerous, because they release carcinogenic substances and persistent organic pollutants. “They are like an atomic bomb, they can’t be allowed to end up in dumps,” he warned.