ROSARIO, Argentina, Nov 7 2011 (IPS) - “After so many years of feminist activism, we still hadn’t realised that you need money to get things done. When I finally understood that, it was like seeing the light. It was a whole new avenue to explore,” Argentine activist Noemí Chiarotti told IPS. 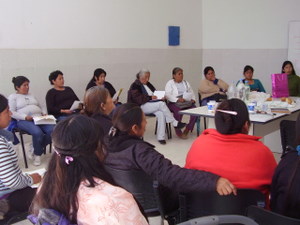 She was referring to the U.N. Women initiative on Gender Responsive Budgeting (GRB), a tool that identifies gender-based inequalities and tries to correct them by allocating public resources fairly.

Chiarotti is at the Institute for Women’s Social and Legal Studies (INDESO) in Rosario, a city 370 km northwest of Buenos Aires, which has a strong tradition of projects connected with women and citizen participation.

That’s why Rosario is pioneering GRB projects in Argentina. But it isn’t easy for women to get involved in money issues, women lawmakers, officials, grassroots activists and academics of the city told IPS.

“The first thing we noticed was the need for transparency in order to understand what the money is spent on. Public administration accountants need training to overcome their habit of talking in jargon, and to accept monitoring,” Chiarotti said.

"GRB makes it clear how much a government allocates to gender equality, and how much priority they give it," socialist city councillor Mariana Alonso, the former head of the women's affairs department in Rosario, told IPS, adding that it is essential that women appropriate this tool and push for changes.

Based on its experience in Bolivia, INDESO has defined three budget categories to focus on: spending that targets women, families, and the culture of equality.

They found that these categories accounted for 1.49 percent of the budget in 2009 and 0.5 percent in 2010. "There are other programmes for women, but they aren't visible, and this mechanism (GRB) forces them to be transparent," said Susana Moncalvillo of INDESO.


“We got training, and we spent two years knocking on doors to get people to explain every little thing, and give us the missing data, because a lot of expenses are hidden, or recorded under the names of different programmes,” she said.

In spite of all the difficulties, they hope that when the accountants realise the need for transparency in expense accounting, and the women have perfected their monitoring system, the process of submitting financial statements will be faster.

Improving budget processes is also necessary for effective investment of resources, which is the central theme of the Fourth High-Level Forum on Aid Effectiveness, to be held by donor countries in Busan, South Korea, Nov. 29-Dec. 1.

Does international aid reach those who are most in need? Does it get lost in red tape? Is it invested wisely? Does it achieve its goals? These are some of the questions to be raised at the summit.

Civil society in Latin America, and especially organisations working for women’s rights, are participating actively in a global campaign calling on delegates at Busan to include the recipients of aid in the planning process to ensure that the assistance is timely, effective and gender-equitable.

Since 2002 the city of Rosario has had participatory budgeting, a programme to encourage local residents to propose projects for the city that will be voted on and, if selected, financed by the state.

The Participatory Budget (PB) amounts to less than three percent of the total municipal budget, and on this scale it was possible in 2005 to begin experiments in participation, design and implementation of spending with a gender perspective.

The project had several dimensions. In 2005, a city council resolution determined that there should be complete gender parity among the special councillors elected for PB projects.

Even so, it was difficult for women to participate. Children’s playrooms were opened at meeting places, with municipal personnel to look after the children, after which women began attending in large numbers.

“Then we realised that women needed women-only training, because they were keen to participate, but the proposals they presented were not for them, but for their children, their families and their neighbourhood,” said Silvina Santana, coordinator of the Rosario municipal department for women’s affairs. After the training sessions, women’s own needs came to the fore at last. “A mammography unit, a workshop for preventing domestic violence and another on sexuality, a magazine, and job training,” Santana said, listing the women’s demands.

Santana said that prior to 2005, the PB did not fund women’s projects. But that year it approved the equivalent of 30,000 dollars for women’s projects, and by 2010 women’s proposals attracted nearly two million dollars in funding.

IPS visited Barrio Toba, a neighbourhood that grew up in the 1990s when thousands of Toba indigenous families migrated from Chaco and other northeastern provinces, and settled together with little interaction with the rest of the population.

Every Wednesday a group of 30 women from the Toba community get together at a health centre in order to overcome their isolation. Their first goal was to learn how to present their own PB proposals.

“Public policies never reached our community, we used to be excluded from everything,” said Griselda Coria, who in the past acted as interpreter for the women’s group. Now they all speak Spanish.

With the help of INDESO, which provided the training, the women gradually gained confidence and formed different groups: one to help people with red tape in public offices, and others on health issues and violence.

The women at the meeting told IPS that many of them find it hard to attend the group because the men don’t like them to participate in community meetings. But they have persevered, and have managed to get several of their PB projects voted and financed.

Public employees and members of INDESO and other organisations set up a network called “Women for GRB”, because they are aware that the bulk of the funding is not accessible from PB but from the city’s general budget, and they are keen to break into it.

“We’re working on the Equal Opportunities Plan, covering all areas of government activity, for the training of public employees and for each ministry to identify actions to be taken with a gender perspective,” said Santana.

The National University of Rosario is contributing by training members of the Faculty of Economics and Statistics on budget and gender issues.

Academic secretary Patricia Gustiniani said courses are being offered and research financed to measure the economic contribution of women’s voluntary work, through an agreement with U.N. Women.

Rosario has shelters for battered women and child care centres that are staffed by municipal employees and an equivalent number of women volunteers, whose work is essential for running the services, Gustiniani said.

This information highlights women’s economic contribution, as does the study the university did on men’s and women’s use of time, which shows how much more unpaid work is done by women, she said.

Ezpeleta said an agreement similar to the city of Rosario’s will be signed with the Economy Ministry, for training their technical staff in making visible the spending that is aimed at achieving the elusive goal of gender equity.