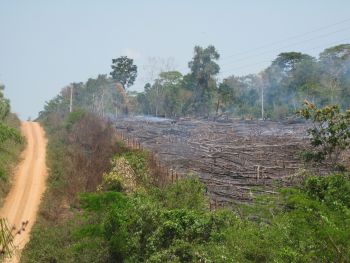 RIO DE JANEIRO, Nov 28 2011 (IPS) - With no meaningful proposals, and in the face of internal setbacks and an adverse international context, Brazil is largely unprepared to assume the leadership role expected of an environmental power at the Durban climate change conference.

Brazil’s responsibilities are even greater since it will be hosting the United Nations Conference on Sustainable Development, called Rio+20 because it is taking place in June 2012, two decades after the Earth Summit that produced the international conventions on climate change and biodiversity, held in the same city of Rio de Janeiro.

But the Brazilian government appears to be “relinquishing a more active role,” judging by the “tepid” paper released on Oct. 27 as its contribution to negotiations at Rio+20, said Luiz Pinguelli Rosa, executive secretary of the Brazilian Climate Change Forum, which brings together government and civil society to jointly formulate public policies.

Environmentalists suspect that the government is avoiding bolder proposals to ensure the attendance of the largest possible number of heads of state and government, especially from the industrialised countries, at next year’s meeting in Rio.

But this is a “mistaken tactic” because the world’s leaders would not be coming to Rio for a pleasant chat, and would instead be challenged and drawn to participate by stronger, more controversial proposals, said Pinguelli, a professor at the Federal University of Rio de Janeiro and expert on energy issues, in an interview with Tierramérica.

For Rubens Born, assistant coordinator of Vitae Civilis, a non-governmental organisation active in climate change negotiations, “the success of Rio+20 will depend on the progress made at COP 17,” the 17th Conference of the Parties to the United Nations Framework Convention on Climate Change (COP 17), taking place Nov. 28 to Dec. 9 in the eastern South African city of Durban.

But Brazil is saddled by internal contradictions that could “tarnish” its image and hold it back from making bolder proposals, Born told Tierramérica.

The Brazilian Congress appears set to approve a reform of the 1965 Forest Code that would relax environmental protection requirements, which could spur deforestation and undermine the reduced rates of deforestation achieved in recent years.

Brazil is also gearing up to become a major oil producer thanks to the reserves discovered beneath a thick layer of salt more than 5,000 metres underwater in the Atlantic Ocean, which will mean an increasingly “dirty” energy mix, noted Maureen Santos, a specialist in international negotiations at the Brazilian Federation of Agencies for Social and Educational Assistance (FASE).

With a “developmentalist” economic policy based on large energy and logistics infrastructure projects, agricultural expansion in the country’s most important biomes – the rainforests of the Amazon and tropical savannahs of the Cerrado region – and growing exports of raw materials, Brazil’s legitimacy as an environmental power is facing serious challenges.

Home to an enviable wealth of natural resources and vast reserves of biodiversity, fresh water and rainforests, Brazil also boasts the world’s most highly renewable energy mix and greatest agricultural potential. All of this has positioned it as a key actor in international environmental negotiations.

In fact, this country of 192 million inhabitants has spearheaded climate change debate even before the 1992 Earth Summit. Basic concepts such as the differentiated responsibilities for climate change based on the historic greenhouse gas emissions of different countries and the Clean Development Mechanism (CDM) originated here.

At COP 15 in Copenhagen, Brazil also made a major impact through a voluntary commitment to reduce its projected greenhouse gas emissions up to 2020 by between 36 and 39 percent, in addition to the stirring speech delivered by then president Luiz Inácio Lula da Silva (2003-2011), who pledged assistance to poorer countries.

But Brazil’s current policies contradict these promises, say environmentalists. The reform of the Forest Code would pose a serious threat to the goal of reducing Amazon deforestation by 80 percent, and there has been no word of Brazilian contributions to the Green Climate Fund created to assist poorer countries.

In the meantime, Brazil has distanced itself from Latin America when it comes to climate issues and is instead coordinating joint positions within the framework of the BASIC countries (which it comprises alongside South Africa, India and China) and the Group of 77 developing countries, or G77, commented Santos.

This means that environmental concerns are not being duly addressed in South American integration processes, she said.

Rio+20 can serve as a “wonderful opportunity” to promote greater unity in a region that contrasts sharply with the “disastrous times” facing the rest of the world, marked by a shift to the right, a return to neoliberalism and the subjugation of democracy to the economy to save bankers from bankruptcy, commented Pinguelli.

The world is on the “brink of fascism” as the current situation calls to mind the crisis set off in 1929 which culminated in a world war, which would now be “unlikely because of nuclear weaponry, that demon that hinders wars,” said the professor and nuclear physicist.

But the economic crisis does not signify a lack of resources to help poor countries with climate change mitigation and adaptation, stressed Born. In 2009 alone, worldwide subsidies for fossil fuels totaled 312,000 million dollars, according to the latest United Nations Human Development Report, he noted.

However, the threat of a recession in the wealthy nations does not benefit the goal of providing billions of dollars in assistance to the developing countries for climate change mitigation and adaptation measures.

The key question in Durban is the survival of the Kyoto Protocol, the only international instrument that establishes binding targets for mitigation. If it is allowed to elapse in 2012, this would effectively mean the dismantling of the entire architecture developed under the Framework Convention on Climate Change.

As the current chair of the G77, Brazil is spearheading the fight for a second period of commitments under the protocol, although this appears to be an impossible goal in Durban.

Negotiator Luis Alberto Figueiredo from the Brazilian Foreign Ministry, however, says that while discussions are heated, an agreement is possible.

Between total collapse and the ideal agreement – new targets for a second period – the most likely outcome is the approval of an extension of the protocol for two or three years, to provide more time for negotiations that are currently facing highly unfavorable conditions, said Morrow Gaines, an international negotiations specialist at Vitae Civilis.

COP 17 does not have the power to bring an end to this international agreement on its own, and various mechanisms depend on the Kyoto Protocol, such as the CDM and the carbon market, which has become a consolidated global industry, he argued.