RIO DE JANEIRO, Nov 7 2011 (IPS) - Environmentalists criticised the lack of concrete proposals in the Brazilian government’s submission to the preparatory process for the Rio+20 conference, to be held in this city in June 2012. 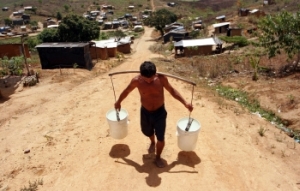 The document submitted Tuesday Nov. 1 to the United Nations for the Conference on Sustainable Development, taking place 20 years after the 1992 Earth Summit in Rio de Janeiro, demonstrates – according to the Brazilian government – its commitment to sustainable development.

It adds that the “permanent incorporation of poverty eradication (is) an essential element for achieving sustainable development”.

The document also stresses “the Brazilian government’s political commitment to multilateralism as the principal long-term solution to the key global challenges of our age,” and says the state “must reassert its role as driver and regulator of development.”

Environment Minister Izabella Teixeira said it is necessary to “make progress towards inclusive sustainable development over the next 20 years.” She added that “an inclusive green economy is the right path.”

But the document, which the foreign ministry says is Brazil’s initial contribution to the first draft of the final declaration to be negotiated by all of the U.N. member states, did not live up to the expectations of this country’s environmental organisations.

The submission “is far from a path leading to the transition to a new economy,” Rubens Harry Born, assistant coordinator of Vitae Civilis, told IPS.

The environmental group participated in the government’s consultation process on the document, as part of the Brazilian Forum of NGOs and Social Movements for the Environment and Development (FBOMS).

According to Born the input process was “interesting,” but “fell short.” He said there were only 20 days to debate all of the issues, with a “very limited concept of what a consultation process should be.”

For example, the NGOs had no chance to debate the document with the Finance Ministry – an opportunity that was given to the trade unions and business, he noted.

“That limited the scope of society’s contributions,” he complained.

Born said the document is short on details with respect to the Global Socio-Environmental Protection Programme it mentions, whose aim is to ensure income in order to overcome extreme poverty throughout the world and to promote essential actions that would guarantee quality of the environment, food security, adequate housing and access to clean water for all.

“What the government has failed to answer is when, how, and with what resources, goals and instruments this will be carried out,” Born said. “We want more tangible targets, which are not set forth in the document.”

The environmentalist also said more recent issues, like nuclear safety in the wake of the March accident at the nuclear plant in Fukushima, Japan, or the question of human migration driven by climate change, were not taken into account.

It says that “based on an inclusive green economy, instead of complex negotiations seeking to establish restrictive and binding goals, objectives infused with a spirit of guidance and addressing a wide range of issues could be established, similarly to the Millennium Goals, in areas where there is already a high degree of convergence of opinions, which would be capable of providing impetus and guidance to the countries towards sustainable development.”

The government suggests a Global Pact for Sustainable Production and Consumption which would include sustainable public procurement based on the idea that governments can play a key role in modifying production and consumption patterns.

Efficient energy consumption labelling, funding for research on sustainable development, and a repository of initiatives form part of the proposed global pact.

Brazil is also calling for a more integrated approach to the question of water, in the United Nations.

But while the government talks about clean energy, it does not discuss, for example, the question of subsidies for fossil fuels, said Born. Nor does it say “when it will support renewable energy sources,” he added.

At the same time, “it will invest billions of dollars in exploiting the ‘pre-salt’ oilfields” – deposits discovered off the Brazilian coast below a two-kilometre-thick salt layer under rock, sand and deep water.

Nor does it lay out clear goals on sanitation – a key issue in regions like Africa and Latin America, Born said, pointing out that across the planet, 6,000 people a day die from water-related illnesses.

“I am afraid that if they want to invite the world’s heads of state here to support such generic proposals, the conference will not be that effective,” he remarked to IPS.

“I’m very worried, because I don’t feel there are effective proposals in terms of evaluation, funding and goals,” added Feldmann, who was also executive secretary of the Brazilian Forum on Climate Change from 2000 to 2004, and of the São Paulo Forum on Global Climate Change and Biodiversity until 2010.

In his view, “there is nothing innovative” in the document, with respect to previous global conferences.

Feldmann agrees on the need to adopt efficient energy consumption labelling, improve global environmental governance, and give priority to financing for research on sustainable development and the green economy. “But in operational terms, how would all of that work?” he said.

Ecologist Sérgio Ricardo, a founding member of the Brazilian Environmental Justice Network, said the document is “rhetoric about a green economy that in practice is in fact a brown economy.” He was referring to the state-run banks that finance unsustainable private initiatives and support non-renewable energy sources like thermoelectric or nuclear plants.

But he said “it is very positive that the Millennium Goals were included, like the reduction of poverty and social inequalities.”

Nevertheless, he told IPS that “there is some distance between the official discourse and the government’s economic policies.”

The Brazilian government’s proposal for the financial sector – which the document says has “a unique capacity for stimulus and inducement in the economic arena” – is an International Protocol for social and environmental sustainability.

A pact for an inclusive green economy should require information on social and environmental performance and corporate governance in the annual reports of state-run companies, private corporations, banks and pension funds, the document says.

In addition, it suggests the adoption of sustainability indices which would serve as reference points for stock exchange investments.

Brazilian Foreign Minister Antonio Patriota explained that once all of the official submissions are presented to the U.N., the negotiation of the conference’s final documents will begin.

“Immediately after the start of 2012, we will enter the intergovernmental negotiating phase, to hammer out the Rio + 20 final document,” he told the press.

Brazil postponed the summit to Jun. 20-22 to avoid a clash with the Diamond Jubilee of Queen Elizabeth II.

The first Earth Summit, whose official name was the U.N. Conference on Environment and Development, held in Rio in June 1992, was a landmark moment.

The governments adopted Agenda 21, the first detailed plan on global, national and local measures for achieving sustainable development, as well as the conventions on biological diversity and climate change.