HAVANA, Nov 15 2011 (IPS) - Farmers and experts on agriculture from Haiti, Guadeloupe and Martinique are touring fields in Cuba this week, along with local colleagues, to exchange experiences to foment ecological fruit growing on Caribbean islands. 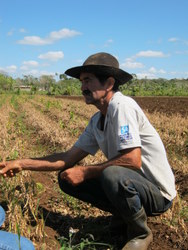 “I’m leaving with a different take on things,” Audrey Retory, who grows fruit and vegetables and raises barnyard fowl in Guadeloupe, told IPS. “There’s no reason for there to be an antagonistic relationship between agricultural production and nature.

“From now on I’m going to use vermiculture (composting using earthworms), which does not require a major investment, and I know that many people will see what I’m doing and want to replicate it,” she said.

“The experts and farmers have shared their know-how, and we have tried to take advantage of this great opportunity, to take the new knowledge back home to our fellow agricultural producers,” said Djuié Abdul, a farmer from Martinique who was one of the 22 participants in the experience.

To highlight Cuba’s experience in these techniques and transfer technology to the other three participating Caribbean islands – these are two of the central aims of the Caribbean Network for the Development of Agroecological Horticultural Systems (DEVAG), a four-year project launched in late 2009 with the support of the French embassies in Cuba and Haiti.

The course that began in Havana on Nov. 7 is the most important activity to date by the project, which is fomenting environmentally-friendly agriculture in islands of the Caribbean, where intensive use of agrochemicals pollutes the soil and leaves residue on fruit and vegetables.

The course in Cuba has included learning about the experiences of successful fruit-growing cooperatives, studies on the application of agroecological techniques in a state-run company in eastern Cuba, and visits to fruit orchards where animals have been integrated for weed control as part of a sustainable agricultural production project in the central Cuban province of Ciego de Ávila.

“All of these farmers grow their own specific crops, but what they have in common is the weather and pests, which are a constant challenge on our islands,” the coordinator of the project in Cuba, Lilian Otero, told IPS.

“Cuba can show how, despite economic limitations, progress has been made in bioproducts and the application of agroecological practices,” she said.

Besides drawing attention to Cuba’s experience in the area, the initiative is promoting joint research by institutes in the region, the training of professionals and farmers, and the creation of an exchange network among farmers, researchers and technicians from the four islands involved in the project.

Ecological agriculture is based on the principles of self-sufficiency and closed-loop farming systems where soil fertility is restored by means of compost and mulch and the use of crops suitable to specific local conditions.

According to Otero, an expert with the Cuban Research Institute on Tropical Fruit Growing (IIFT) orchard management group, these essentially “rustic” or “do-it-by-hand” alternative farming methods can easily be adopted by farmers, because they don’t involve complicated techniques and can be adapted to the conditions of each area.

“Compost, vermiculture, intercropping or growing different crops on the same field, and making use of the natural enemies of pests are some of the viable practices that be used as part of the concept of agroecological fruit-growing,” the researcher explained.

DEVAG is based on the idea that agroecological or biological farming is not practiced widely enough in the Caribbean, even though the benefits of these practices are recognised, in terms of a healthy diet and food self-sufficiency, and as a source of income.

The project aims to fuel the adoption of innovative, adaptable farming systems to help meet the growing levels of demand for fresh, organic produce in local markets, while reducing the negative impact of agriculture on already fragile, limited island ecosystems.

The economic benefits of agroecological farming are also significant, and the techniques can open the door to markets with increasingly strict requirements, the participants in the course learned.

Official statistics indicate that Cuba exported more than 1,000 tons of organic grapefruit, orange, coconut and mango juice to Europe in 2009 and 2010.

“We want to benefit from Cuba’s experiences and to take home with us these practices, which do not involve the use of pesticides, and are profitable,” said Christian Lavigne, with the Centre for International Cooperation in Agricultural Research for Development (CIRAD) in the French overseas department of Martinique.

Otero, for her part, said “the idea is to create a network and for the farmers themselves to become promoters of these techniques, so that they spread on the islands, and continue to be practiced even when the project is over.”

Ricot Scutt, an agricultural producer, researcher and professor from Haiti, said Cuba’s experiences could be widely applied in his country, because the two countries have similar climates, crops and soils, and because application of the techniques does not require a large output of money.

“Food security is a very important issue, and these technologies can be easily taught to people with little knowledge and resources, and with a great need to boost their production levels,” he said.

With respect to the course, Otero said “the theoretical instruction that the participants have received in the classroom lays the scientific-technical foundation. Afterwards, in the visits to the field, they see this isn’t a fantasy. With their hands, they touch what they have learned.”