CHINA: Slowing Down in Search of Happiness 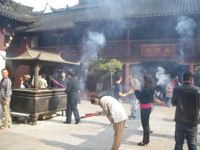 SHANGHAI, Nov 28 2011 (IPS) - Chinese essayist Zhou Zuoren once wrote that China should be experienced on a small wooden boat slowly gliding on its rivers, taking in its views. But arriving in Shanghai on the country’s most advanced high-speed railway leaves little doubt that slow boats are no longer the way to romanticise China of today.

The journey from Beijing at a speed of 300 km/h is giddying. The city of Shanghai itself makes one light- headed, boldly pushing the boundaries of cutting-edge architecture with its jumble of elevated roads and gravity-defying skyscrapers. Shanghai people – regarded as an echelon of the avant-garde by the rest of the country, are in possession of the latest electronic gadgets and take it for granted that their city’s skyline is often chosen as a backdrop for Hollywood science-fiction films.

“When I go to New York now I keep thinking their iconic buildings look really, really old,” says Yang Jianlong, director of the Urban Cultural Research Centre at Shanghai Normal University. The World Expo that the city held in 2010 was the defining point in the city’s transformation into a city of the future, he says.

A series of safety disasters since the beginning of the year have taken the pride out of China’s fast, money-intensive and many say reckless economic development. Fast-speed trains have collided, roads have collapsed, and more poignantly, scores of young children have died as a result of greed, corruption and poor supervision.

Until not long ago public displays of wealth and economic power were the criteria to go by when assessing the aspirations of Chinese people. But of late, words like happiness and dignity have been filtering the parlance of officials here. Even the latest five-year plan that Chinese mandarins approved earlier this year as a guide for the country’s economic development has been described as a “plan for happy China”.

After more than 60 years of almost unchallenged monopoly of power sustained through the delivery of constantly rising living standards, the Communist Party is worried that this may no longer be enough for its citizens.

“It is simple,” says Wu Xiaohong, an insurance broker with a language diploma from the UK and an enviable salary at the age of 26. “They (the leaders) worry about the effect of the rat race. Like we all have great jobs, we all make good money but we cannot afford to buy a house here and there are no prospects for great improvement in our lives.”

It is not only the consequence of high inflation and the property bubbles in the big cities that is causing this disquiet. It is also the clash of rising expectations of a more existential type for the young generation and the realities of a politically calcified culture where real success is reserved only for the party elite.

For many people of the older generation simply having the security of a well-paid job would have been enough, but recent surveys have revealed that those that have benefited most from China’s economic reforms are now unhappy and thinking of seeking better lives abroad.

Some 40 percent of Chinese recently polled by Tsinghua University and the magazine Xiaokang said they were not happy with their lives. Another survey by the Hu Run report on the richest people in China and the Central Bank found that 60 percent of the rich were either emigrating or considering leaving the country.

“It is more difficult to make money in the west but once you have some you and your children live a better quality of life than in China,” says Yu Cai who has already settled in the UK and runs a business helping medical tourists from China. “There are good state schools, free healthcare and clean air.”

It is perhaps not a surprise then that Guangzhou – China’s wealthiest city – was the first to unveil its happiness index and declare its officials ready to work towards making their citizens “more happy”. State media has promised that other cities will follow suit.

Meanwhile, China’s old and young are massively flocking to the cities’ once forgotten, then revived and revamped religious temples. On a Saturday morning, the old Taoist temple of Shanghai, Chenghuangmiao, is filled with a young crowd burning incense sticks and paper ingots, and kowtowing to the Taoist deities.

“Spiritual renaissance it isn’t,” says Zhu Dake who studies culture at Tongji University. “It is a much more utilitarian type of religion, a way to escape the pressures of the day. They pray for luck when needed or pray to be spared misfortune.”

Others are finding solace in writing poems about the run-away China. One penned by Tong Dahuan and circulated on the Internet goes like this: