China Steps in to Patrol the Lawless Mekong

BANGKOK, Nov 11 2011 (IPS) - China plans to send armed patrol boats down the Mekong River and assert its authority over a corner of Southeast Asia infested by warlords and drug traffickers. 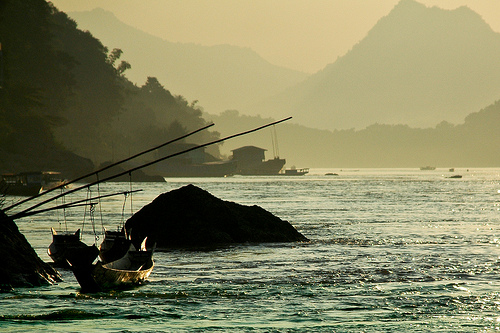 The Asian giant’s designs on the Mekong, which it shares with five countries in its southern backyard, including Thailand, Burma and Laos, are to be unveiled in December.

Five boats are being equipped to provide security for Chinese cargo ships that ply between Thailand’s northern river-port town of Chiang Saen and the Guanlei port in China’s southern province of Yunnan, according to the website of China’s ‘People’s Daily’ newspaper.

Their range will include the craggy, forest-covered mountainous terrain of the Golden Triangle, one of the world’s most notorious drug trafficking routes where the borders of Laos, Thailand and Burma meet.

The patrol boats will provide protection for “legal cargo ships from China, Laos, Burma and Thailand,” Fang Youguo, general secretary of an association of Chinese ship owners who use the Mekong for trade, was quoted in the report. They will “patrol key areas along the Mekong.”

The strategic value of this remote corner of Southeast Asia gaining for Beijing was apparent a decade ago when China agreed with Thailand, Laos and Burma (or Myanmar) to deepen this stretch of the Mekong for navigation.

Ships on this trade route now handle over 1.5 billion dollars worth of goods annually carrying cement, iron, fresh fruits and an important energy source – oil – from Chiang Saen to Yunnan.

Vessels coming down from China carry garlic, onions, apples and plastic products for the markets of Thailand.

China’s decision to provide security for the estimated 130 ships that ply this route was sparked by the gruesome killing of 13 Chinese sailors on board two Chinese cargo vessels in early October.

Nor Kham, a warlord from Burma’s Shan ethnic minority was initially under suspicion by a special Thai military force for the murders. Yet, by the end of October nine members of the Thai force were fingered for the alleged crime by the Thai police.

By early November another name had surfaced – that of Chinese tycoon Zhao Wei, owner of a sprawling casino in a Laotian province on the Mekong. Zhao has had previous run-ins with Chinese officials cracking down on gambling dens that draw Chinese punters.

The killings – which triggered outrage in China – have frozen the river-bound trade route till the patrol boats are ready. Together with the overland commerce, the river route has helped Beijing form a unique trade alliance with its smaller southern neighbours.

“(The) Oct. 5 (killings) have caused great public concern and outcry in China,” wrote Ding Gang, in a commentary in the ‘Global Times’, one of China’s largest dailies, weeks after the murders. “Security issues are vital to the stability of regional cooperation.”

Beijing put diplomatic pressure on Thailand, Laos and Burma to investigate the murders, and an agreement signed on Oct. 31 between the four countries to jointly crack down on cross-border crime, has been revealing to China watchers.

“It is sending the message that it (China) aspires to be the dominant regional power,” Nicholas Bequelin, senior China researcher for the global rights lobby Human Rights Watch, told IPS.

“For justice to prevail, the perpetrators and instigators must be ferreted out and dealt with by the law,” argued an editorial in the English language ‘China Daily’ newspaper last week. “Given the complex situation in the Golden Triangle area, transnational investigation and coordination is essential.”

Such rhetoric for a new security regime will be tested against the climate of lawlessness in the Golden Triangle. Prevailing regional mechanisms, including police forces, have been unable to curb smuggling, shootings,

“Cross-border crime across the Mekong River continues to be a problem despite best efforts by the relevant government authorities to control it,” says Gary Lewis, head of the East Asia and Pacific arm of the United Nations Office on Drugs and Crime (UNODC). “Examples other than drug-related criminal activity include extortion, robbery and shootings.”

“Some areas of the Golden Triangle are porous and remote, which makes it extremely difficult to police the entire length of the Mekong,” he explained in an interview. “This provides an ideal environment for criminals to operate.”

The 4,880-km long stretch of the Mekong that flows through the Golden Triangle was singled out in a September UNODC report as a “key trafficking route” for methamphetamine pills manufactured in Burma’s Shan state.

The report mirrors the Golden Triangle’s record from the past when it was the world’s leading source of opium and heroin, in addition to being a trafficking route.

When not profiting from these drug routes, the traffickers and warlords in the area have been fleecing Chinese cargo ships by charging them “protection money,” says Khuensai Jaiyen, editor of an ethnic Shan news agency.

“They have attacked cargo ships and confiscated their goods many times over the years. Some Chinese crewmen have been shot for refusing to stop,” Jaiyen said.