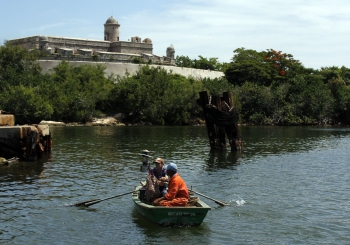 Fishermen in Cienfuegos Bay in the south of the island, where the sea level could rise 25 cm by 2050 and up to one metre by 2100. Credit: Jorge Luis Baños/IPS

HAVANA, Nov 25 2011 (IPS) - Cuba will be attending the next round of climate change negotiations after a year that has seen a growing consensus in the developing South to put pressure on rich nations to take on firmer commitments within an international governance regime for climate stability.

Fishermen in Cienfuegos Bay in the south of the island, where the sea level could rise 25 cm by 2050 and up to one metre by 2100. Credit: Jorge Luis Baños/IPS

This Caribbean island nation has embraced the common position adopted by the Bolivarian Alliance for the Peoples of Our America (ALBA), made up of Antigua and Barbuda, Bolivia, Cuba, Dominica, Ecuador, Nicaragua, St Vincent and the Grenadines and Venezuela, as well as by the African Group of 53 countries and by the 48 Least Developed Countries.

In Panama, they forged an alliance to “save the climate regime and ensure success in Durban,” they announced to the press Oct. 7.

“We agreed the basic principles for this new cycle of negotiations: the right of countries to equitable participation in what is called the atmospheric space, the issue of environmental justice, indeed a whole cluster of principles that serve as our common negotiating platform,” said Orlando Rey, head of environment in Cuba’s Science, Technology and Environment Ministry.

This is an important political achievement, as it means that at the debates in Durban the common platform will be supported by “a large proportion of developing nations, especially those that are most vulnerable and likely to feel the impact of climate change most intensely,” Rey told a small group of journalists, including IPS.

For an island nation like Cuba, one of the most feared consequences is a rise in sea level.

By the middle of this century, an area of 2,550 square kilometres, equivalent to 2.23 percent of Cuba’s territory, could be under water, and by 2100 the flooded area could be as much as 5,994 sq km, according to “Macroproyecto sobre peligros y vulnerabilidad costera para los años 2050 y 2100” (Macro-project on Coastal Threats and Vulnerability in 2050 and 2100), a series of studies carried out by scientists at 16 Cuban institutions and partly published in the government-controlled media.

This puts some 122 coastal settlements on red alert: unless adaptation measures are adopted, by 2050 they will be partially damaged or totally lost because of the rise in sea level. According to the forecasts, 15 would disappear completely that year, and another six would be wiped out by 2100.

The overall difficulty about adaptation to the impact of climate change is that certain countries lack not only resources, but knowledge and capability to combat it, Gisela Alonso, the head of the government’s Environmental Agency, told IPS.

So the problem is not only financing or technology transfer. Countries “must have their own infrastructure, material and human,” to fight climate change effects and adapt to them according to their specific characteristics, Alonso said.

Cuba has the advantage of having developed a programme that includes studies on risks and vulnerability as well as the adaptation measures that should be adopted by each social, economic and community sector, since “not every region of the country will experience the same impacts,” she said.

Measures such as a ban on building within 10 km of the coastline; compulsory protection and restoration of mangroves and coral reefs – natural barriers of great importance for dealing with sea level rises – and constant monitoring of crop irrigation water use, are already being implemented, said Alonso.

At the Durban conference, “the worst possible outcome would be to bury the Kyoto Protocol,” Rey said.

Under the Kyoto Protocol, in force since 2005, industrialised countries committed themselves to reduce their greenhouse gas emissions, which cause global warming, by 5.2 percent with respect to 1990 levels. The deadline for this goal – already unreachable – is 2012, when the first commitment period of the Kyoto Protocol expires.

In Rey’s view, keeping the protocol alive will be the main challenge at the 17th Conference of the Parties to the United Nations Framework Convention on Climate Change (COP 17), to be held Nov. 28-Dec. 9.

The aim of the developing south alliance is to secure a second period of commitments, with more stringent emission reductions; but this will meet with resistance from the United States – not a party to the protocol – and from Japan, Canada and Australia, among other countries, the Cuban official said.

Although continuity of the protocol is proving difficult to ensure from a legal point of view, it would be a “political coup” if everyone agrees at Durban that Kyoto is still a valid instrument, and its format of different responsibilities for industrialised and developing countries is the right path, he said.

“There are a number of proposals. The lawyers are working out legal solutions, but the main thing is to reiterate the political commitment of working on the basis of the Kyoto Protocol,” said Rey.

The resources are to be used to help poor countries prepare for the effects of climate change and to mitigate their own greenhouse gas emissions.

Creating the fund was an important achievement, but financing it is equally important. Rey, who has taken part in many climate negotiations, hopes that COP 17 will at least point the way to getting an initial sum together so that the fund can begin to operate, even if the actual amounts agreed are not met.

If the negotiations in Durban get bogged down, and attempts are made to channel the debate into forums made up by a limited number of countries, Cuban diplomats will stand up for continuity of the Kyoto Protocol as the framework for negotiations that reflect the “spirit” of the U.N., in which “each country has a vote,” Rey said.