CHARIKOT, Nepal, Nov 9 2011 (IPS) - Suntali Shrestha wrings her hands in tension and despair as she recounts how she has been spending sleepless nights fearing that the flood alarm in her village would go off while she slept and she would be submerged. 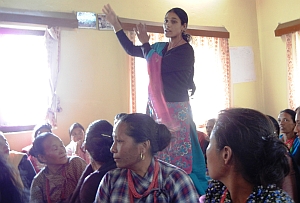 Women in Nepal’s Dolakha district testify to living in fear of being submerged by a glacial lake outburst flood. Credit: Sudeshna Sarkar/IPS

“The sirens are always there at the back of my mind, they won’t let me have any peace,” the 45-year-old farmer’s wife cries out addressing a crowd of people, mostly women, who have gathered in this town to talk about the hardships they have been facing due to changes in the climate.

It is one of Nepal’s “women and climate justice hearings” and the village women, some of whom had walked for hours to reach the venue, are hoping their voices would be heard by the authorities, perhaps also at the U.N. conference on climate change to be held in Durban this month.

Organised by Jagaran Nepal, a Kathmandu-based non-profit working to promote women’s rights, peace and governance, and local host Mahila Utthan Kendra (Centre for Women’s Upliftment), the tribunal, held on Oct. 30, was supported by the feminist task force group of the GCAP (Global Call for Action Against Poverty) Foundation.

It focused on select villages in Dolakha, a mountainous district about 135 km northeast of the capital city of Kathmandu, which lives with the threat of potential submergence.

Nagdaha, the village Suntali comes from, lies under the shadow of Tsho Rolpa, the largest glacial lake in Nepal and now, the most potentially dangerous. Lying at 4,580 m at the foot of the 7,146 m high Gauri Shankar peak in the Himalayas, Tsho Rolpa was formed by the gradual melting of the Trakarding glacier.

Though walled in by a natural moraine dam, the 1.76 sq km lake has been swelling as the Trakarding is melting due to the rise in temperature. Nepal’s annual mean temperature has been rising by 0.06 degrees Celsius per year with the mountains warming even faster by an additional 0.08 degrees Celsius.

This has caused glaciers to recede and glacial lakes in the Himalayan region to grow in number as well as in size. With the Trakarding retreating at the rate of 66 m per year, frequent avalanches now pose a greater threat to Tsho Rolpa’s natural dam.

Since the 1960s, Nepal has seen 17 glacial lakes breach their boundaries, causing death and destruction. Studies had forecast that Tsho Rolpa would also cause a GLOF – glacial lake outburst flood – in 1997. If the dam gets breached, a flood of nearly 80 cu m of water could put the lives of over 6,000 people at risk and destroy a 60 megawatt hydropower project.

Villagers say in the worst-case scenario, a Tsho Rolpa GLOF could also affect the Tamakosi river that flows through the region. The Tamakosi is a tributary of the mighty trans-border Kosi river that flows through Tibet, Nepal and China. The Kosi creates frequent monsoon flood havoc in Nepal and India and a GLOF could increase its power to devastate.

Though Nepal’s government installed 17 stations to issue early flood warnings – through air horns backed by sirens – villagers say some of them were disabled during the 10-year civil war fought by the Maoist insurgents. Also, while people from the at-risk zone moved to safer areas in 1997, they returned to their villages when nothing happened.

The warning signs put up by the government mean nothing to people like Suntali, who cannot read or write.

“There is no school in Nagdaha,” Kamala Shrestha, a 24-year-old poultry farmer, tells the tribunal. “The nearest school is in Charikot, which is two hours drive. So only two or three women in this village can read and write.”

There are no health posts either. “Even to buy paracetamol we have to go to Charikot,” Kamala adds. “Plus, there is no motorable road, which means we have no access to the market. We wish the tribunal will make the government build a school, health post and road.”

Sharmila Karki, Jagaran Nepal’s president, says the tribunal’s report will be forwarded to COP 17 when it starts in Durban on Nov. 28.

“We want a member of the community to raise the issues in Durban but it is a tough challenge,” Karki says. “Though Nepal is among the countries most vulnerable to climate change, people here are still not aware of the dangers. Also, there is a huge deficit in gender perspective when it comes to making policies.”

When the first tribunal was held in Kathmandu in 2009, a participant told the audience she was suffering from a prolapsed uterus due to climate change.

“She said the streams in her village were drying up and she had to walk for nearly five hours to fetch water,” Karki said. “Doctors affirm that carrying heavy burdens for long periods can cause uterine prolapse in women; yet many people in the audience, unaware of that, laughed in derision when they heard her.”

Karki finds an ominous development since the last hearing. In 2009, women talked about physical problems: being displaced by floods, food insecurity and poor health. But this time, they talked of mental stress as well.

While the government last year made policies to prevent domestic violence, there is no policy to help women get climate justice.

“Living in an environment of psychological terror is also a violation of women’s basic rights,” Karki warns.

“Women who have to manage households are under growing stress, especially since there is no policy to ensure their access to natural resources like water, healthcare or the education that they need in order to be able to cope with change.”