UNITED NATIONS, Nov 8 2011 (IPS) - More than 5,000 Haitian cholera victims are seeking compensation, action and an apology from the U.N. and the United Nations Stabilisation Mission in Haiti (MINUSTAH) for the ongoing epidemic that has killed more than 6,600 Haitians and sickened more than 476,000 since October 2010. 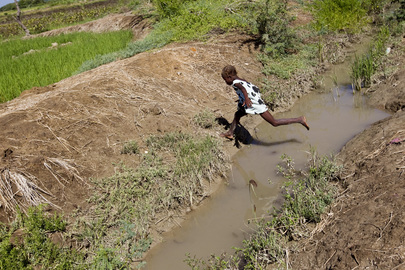 A young child is seen crossing one of the canals of the Artibonite River, identified as the source of the cholera outbreak. Credit: UN Photo/Sophia Paris

Brian Concannon, who is based in Boston and is the director at the Institute of Justice and Democracy in Haiti, helped organise a petition from Haitian victims and relatives of victims, before filing the claim to the U.N. simultaneously with a claim to its peacekeeping mission MINUSTAH in Haiti, last Thursday.

The victims’ petition alleges that the U.N. and MINUSTAH are liable for hundreds of millions of dollars for failing to screen and treat peacekeeping soldiers arriving from Southeast Asian countries experiencing cholera epidemics, dumping untreated waste from a U.N. base directly into Haiti’s longest and most important river, the Artibonite, and failing to respond adequately to the epidemic.

Concannon and his team say in the petition that reports compiled by the United States-based Centres for Disease Control and Prevention, the Harvard Cholera Group, Dr. Renaud Piarroux, a French epidemiologist who has spent his career studying cholera, the Wellcome Trust Sanger Institute in Cambridge, England and the International Vaccine Institute in Seoul, Korea found that the Vibrio cholerae bacteria was introduced to Haitian waters by MINUSTAH personnel deployed to Haiti from Nepal.

Prior to the peacekeepers’ arrival, Haiti had not reported a single case of cholera for more than 50 years.

While Concannon and Kurzban are waiting for a response from the U.N., MINUSTAH has requested a meeting to discuss their petition, the date is yet to be scheduled.

"As far as we know, this hasn't been done before, so it all depends on the U.N.'s response about how they will deal with it," Concannon told IPS, in regards to how long they will wait until they pursue further action with a national court.

"If they come back to us and say they are willing to talk about it and follow a fair formula, then we will be happy to wait. This is the worst cholera epidemic in the world and some experts expect the death toll to reach 20,000, unless there is swift action. We want the U.N. to bring in medical treatment straight away."

Kurzban agreed and said their goal was to work with the U.N. to resolve the issue before it goes too far.


“Ever since the cholera outbreak, we have had people coming to us asking us what to do,” Concannon told IPS.

“We originally thought the U.N. would take on responsibility as we didn’t originally see this as a legal case at first. But we could no longer dismiss the people after no action was taken.”

Cholera, a waterborne illness that causes diarrhoea and vomiting, is a result of an infection with a pathogenic strain of the Vibrio cholerae bacteria. If it is not treated immediately, cholera can kill adults and children in a matter of hours. According to the World Health Organisation, up to 80 percent of cases can be treated successfully with oral rehydration salts.

The virus, which is endemic in Nepal, reportedly had a surge of cases in the Kathmandu Valley in August and September 2010. With peacekeeping troops from Nepal deployed to Haiti every six months, a new contingent arrived at the Mirebalais camp on Oct. 9, 12 and 16, 2010. These troops had spent three months training in the Kathmandu Valley.

According to the petition, Nepalese soldiers deployed as part of the MINUSTAH mission in Haiti were not tested for cholera prior to entering Haiti.

Ira Kurzban, an attorney at Kurzban, Kurzban, Weinger, Tetzeil & Pratt P.A. in Florida who is involved with the petition, said at a press conference at the U.N. Tuesday that a number of cholera carriers do not exhibit active symptoms which left room for error, as the U.N. only conducted tests on individuals who showed active symptoms.

According to the New York Times, the Cuban mission in Haiti has asked the U.S. to help finance a 30-million-dollar major hospital for specialists as part of a broader effort to remake the health system. Since the outbreak of cholera, the Cuban mission has treated more than 76,000 cases of the disease, with just 272 fatalities.

The chief of the Cuban medical mission, Dr. Lorenzo Somarriba, said they send people to the homes of the victims to educate them on the disease and provide them with tabs to clean the water – purification tablets that have been critical in a country where treated water is rare.

In a statement released by the spokesman for the U.S. Embassy, Jon Piechowski, he said while recovery in Haiti was a broad international effort, particularly to advance the health sector support to Haiti, they had not entered into any agreements with the Cubans.

Concannon spoke of a victim who was one of the first to die from cholera on Oct. 22, 2010. The petitioner had been working in a rice field and drank from the canal that irrigates the field. Afterwards, he alerted his family about a boiling water sensation in his stomach and began to vomit before spending the night at home in excruciating pain.

The next morning he went to hospital, and in the afternoon he died. He left his wife and 12 children behind.

The petitioners, who hail from Mirebalais, St. Marc, Hinche and Port- au-Prince regions of Haiti, make up more than 5,000 individuals filing a claim including victims, parents of children and relatives of victims who have died.

“Our clients are challenging the institution to act consistently with what it knows to be true and just,” said Concannon.

Secretary-General Ban Ki-moon appointed an independent panel of scientific experts to investigate the source of cholera in Haiti on Jan. 7, with a report released in May.

While the experts concluded that, “the evidence overwhelmingly supports the conclusion that the source of the Haiti cholera outbreak was due to contamination of the Meille tributary of the Artibonite River, with a pathogen strain of current south Asian type Vibrio cholera as a result of human activity”, they didn’t attribute the outbreak to an individual.

At a press conference Tuesday, the secretary-general’s spokesperson said the U.N. peacekeeping mission as well as humanitarian development agencies were working with Haitian authorities to do everything possible to bring the spread of cholera under control.

He confirmed that the U.N. and MINUSTAH had received the letter and it would be looked at by the relevant part of the peacekeeping department.

“The independent panel of experts concluded that the Haiti cholera outbreak was caused by the confluence of circumstances as described in the report and was not the fault of or deliberate action of a group or individual person,” said the spokesperson addressing the U.N.’s response to the petition.

A MINUSTAH spokesperson emailed IPS and confirmed that the petition had been received and would follow the procedures to be transmitted.

She wrote, “MINUSTAH keeps and will remain committed in supporting all the efforts undertaken to fight the epidemic and its impact, in support of the government.”