BANGALORE, Nov 25 2011 (IPS) - As the number of captive elephants grows to 35 percent of the wild population of the world’s largest land-dwelling mammal, elephant trainers, or mahouts, find themselves just as chained to hardships as their charges. 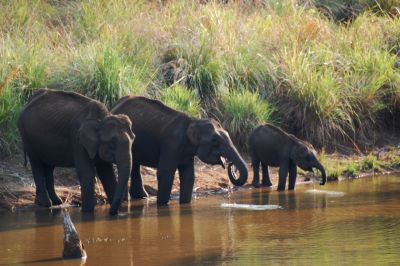 Elephants roaming free in the forest, away from their trainers. Credit: Malini Shankar/IPS

The wild elephant population has dwindled from 600,000 in 1989 to 35,000 today. According to R. Sukumar, chairman of the Centre for Ecological Sciences at the premier Indian Institute of Science in Bangalore, 3,500 of the estimated 14,000 captive elephants can be found in India.

Here, where elephants are used for a wide range of religious and economic activities, the twin fates of mahouts and elephants can be observed on a daily basis.

In September 2008 a caparisoned elephant killed its mahout during the world-famous Dasara celebrations in Mysore, a city in the state of Karnataka.

During the ten-day long annual festival of the erstwhile Royal family of Mysore, elephants are made to carry religious articles through the streets in a parade that includes horses, bands, orchestras and military or paramilitary troops. The festival’s grand finale is celebrated as a victory of good over evil in India.

Today, six decades after the Mysore kingdom ceded to independent India, the Dasara festivities continue to enjoy state sponsorship for tourist purposes, despite the festival’s deadly toll on its participants.

Captive elephants are trained for these ceremonies from a young age using extremely cruel training methods including emotional abuse, making a mahout’s job one of the most hazardous in the world.

In preparation for religious festivals, mahouts train elephants to walk with the replica of a golden howdah (a mini throne), weighing 750 kilogrammes, on its back. To simulate the additional weight of a 250-kilogramme sawdust cushion, which acts as a buffer between the sharp edged golden throne and the creature’s back, elephants practice for the festival by carrying an equally heavy sandbag inside the throne.

Training also includes forcing the animal to inhale gunpowder and endure a series of exploding fireworks, called crackers, “to get it used to the ‘21-gunshot’ salute,” according to Dr. Nagaraj, the veterinary officer at Mysore’s Dasara elephant training camp in Karnataka.

Nibha Namboodri, a doctor of Zoology turned elephant trainer, told IPS she took up the job of a mahout “out of a strong motivation for conservation and handling elephants with compassion.”

“Training differs from one state to another, as do the degrees of cruelty,” she said.

In Kerala, for instance, mahouts use a curved hook with a sharp pointed edge behind the elephant’s ear. The painful technique has caused dozens of mahout deaths at the jaws of suffering elephants.

“Until five years ago at least 10 mahouts died every year in Kerala. Elephants’ behaviour at festivals can be partly explained by stress resulting from overwork, enduring poor working conditions and a lack of basic needs such as food, water, shelter, sleep and social life,” Namboodri explained.

Mahouts work round the clock, every single day of the week. At dawn every morning, rain or shine, they trail the 50-foot long chain on an elephant’s hind-leg through the forest to bring their charges back to the camps.

Elephants are also freed every evening to forage for their natural food in the forests. Often, they wander 12 to 15 kilometres away to renew ties with their natural families. The mahout then has to search for the elephant, trekking across deadly forest terrain with the threat of encountering sloth bears, wild elephants and venomous snakes, in a search that sometimes lasts up to seven hours.

Many elephants understand that the mahout will unfetter their heavy ankle chains, and so greet their trainers gratefully, but others rebel against their captors so as to return to the wild.

Mahouts risk limb and life to bring the animals back to the stables for their duties, which include logging, capturing thieves, training young elephants and giving rides to tourists.

Mahouts are also responsible for feeding and bathing the elephants, as well as treating and cleaning their wounds and sores. If wild elephants raid crops on forest fringes at night, mahouts are awakened to chase them away with crackers and huge fireballs, “putting us at great risk,” according to 38-year- old J. Nagaraj, a mahout in the Bannerghatta Biological Park near Bangalore.

Facing wild elephants that are understandably scared for their lives at the sight of fireballs is often a life or death situation, he added.

He complained that, while his colleagues in other elephant camps across Karnataka have job security commensurate with the strenuous requirements of elephant training, those in Bannerghatta Park face a much more unstable employment situation.

This is “largely because of administrative disarray,” a senior forest official in Bangalore, speaking under condition of anonymity, told IPS.

J. Nagaraj gets a monthly salary of 3000 rupees, the equivalent of roughly 56.94 dollars – an income that is utterly incompatible with a risky, exhausting job for which he toils round the clock, 365 days a year.

And the mahout’s struggle is only one piece of the puzzle. Elephants too experience severe trauma. Though they receive a steady supply of food and security from poachers while in captivity, they are stripped of their natural habitat and the chance to socialise with their families, a painful deprivation for animals accustomed to living and travelling in herds.

At the Dasara training camp, the elephants’ diets undergoe a huge change from what they would eat in their natural habitat. Each day, they are fed five kilogrammes of lentils, wheat, and boiled rice, all cooked together with salt, onions, green vegetables and 250 grammes of butter. They also receive steamed millet flour cakes wrapped in paddy straw, coconut, tree-foliage, fodder and groundnut cakes twice a day.

“Jaggery (brown sugar cakes) and other supplements are give as snacks to help secure compliance,” J. Nagaraj told IPS.

Worse, perhaps, than the elephants’ torturous training and the mahouts’ economic impoverishment, is the growing threat that thousands of captive elephants will be slaughtered as the age-old tradition of elephant training slowly dies away.

Financial constraints leading to a lack of trained manpower has placed severe restrictions on recruitment of mahouts.

Prajna Chowtha, another female mahout in Bangalore, told IPS, “The remaining captive elephants may have to be put to sleep if there are no more mahouts in the future.”

Since captive elephants cannot easily reintegrate with their wild cousins because of rejection from the herd or risks of infections from human interaction, many experts opt for hard options such as culling, long-term contraception and relocation.

Various other experts have arugued that without better and more efficient wildlife management services, the future for captive elephants and their trainers looks increasingly bleak.

This tragedy is a classic case of cyclical anthropocentricism: elephants made captive for the sake of human livelihoods are now at risk of being massacred due to a lack of manpower to care for them. With the population of wild elephants dwindling fast, we must ask ourselves why elephants are not simply left in peace in their natural habitats?

*Malini Shankar is a wildlife photojournalist and documentary filmmaker based in Bangalore, India.