Iran’s Growing Isolation a Dubious Win for the West 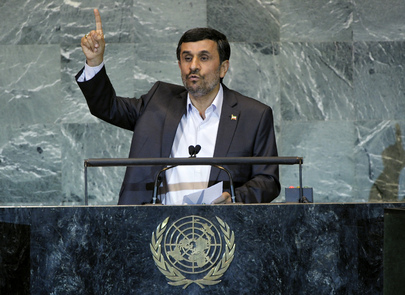 Some analysts believe the British embassy attack was meant to embarrass the government of Mahmoud Ahmadinejad. Credit: UN Photo/Marco Castro

WASHINGTON, Nov 30 2011 (IPS) - Scenes from Tehran Tuesday of bearded Iranian youth swarming over the walls of the British embassy evoked memories of the 1979-81 hostage crisis that created the image of Iran as a pariah state.

Some analysts believe the British embassy attack was meant to embarrass the government of Mahmoud Ahmadinejad. Credit: UN Photo/Marco Castro

But the incidents vary in ways that are more worrisome for international peace than the seizure of the U.S. embassy by radical students some 32 years ago.

The latest events come in the context of an escalating intelligence and economic war between Iran and the West over its nuclear programme that could spiral out of control at a time that the world economy and an already unstable Middle East can ill afford.

The hostage crisis took place while Iran was still in the throes of revolution and solidifying its form of government. Then leader Ayatollah Ruhollah Khomeini embraced the action after it became clear that it was both popular and a means of disposing of moderate rivals within the new regime.

In contrast, Tuesday’s event – despite an expression of regret by Iran’s foreign ministry – appears to have been orchestrated by the regime’s security forces.

It followed two mysterious explosions, one of which destroyed an Iranian missile facility, and new U.S. and European economic sanctions, including a British cutoff of dealings with Iran’s Central Bank, a move that hawkish U.S. lawmakers are hoping to replicate by the end of this year. Even before Tuesday’s attack, the European Union was scheduled to consider additional sanctions at a meeting in Brussels Thursday.

Police reportedly stood by while members of the Basij – a volunteer force of thuggish young men considered more loyal to the office of the current leader, Ayatollah Ali Khamenei, than to the government headed by President Mahmoud Ahmadinejad – broke into the British compound in downtown Tehran, destroyed property and burned documents.

Other Basiji invaded a British diplomatic residence in north Tehran and briefly held six British staff members. On Wednesday, Britain announced that it was closing the embassy and withdrawing its diplomatic personnel from Iran.

The original hostage crisis led the U.S. to break off diplomatic relations with Iran and persuaded Washington and much of the rest of the world to side with Iraq when it invaded Iran in 1980, seeking to profit from the revolutionary chaos and Iran’s isolation.

The ensuing eight-year war devastated both countries but was actually welcomed in some quarters in the West. Former Secretary of State Henry Kissinger famously commented at the time that it was “a pity” that both Iran and Iraq could not lose.

The Islamic Republic of Iran is now more isolated than it has been since the 1980s, but it also has a greater capacity to respond in ways that could disrupt the world economy – affecting the price and supply of oil, for example.

Iran has more mature asymmetric capabilities to carry out acts of violence abroad through groups such as Hezbollah and Hamas. And it has more missiles that could attack Saudi oil fields, as well as a steadily growing stockpile of partially enriched uranium that could be turned into nuclear weapons if Iran so chose.

Paul Pillar, a professor at Georgetown University and former National Intelligence Officer for the Near East and South Asia, told IPS, “We ought to be worried about a spiral getting out of control on both sides.” In Iran and its adversaries, “there is so much resignation to perceived unmitigated hostility on the other side that it is hard to see a way out.”

Meanwhile, Iranian acts such as the invasion of the British Embassy “feed similar perceptions in the United States” and its allies, Pillar said.

Pillar and other Iran experts worry about the prospects for an incident in the Gulf between Iran’s Revolutionary Guard Navy and U.S. forces that might escalate into a broader conflict.

There is also the possibility that the growing tension will spur Iran to accelerate its nuclear programme in hopes of deterring a U.S. or Israeli attack.

Since most of the world seems to believe that Iran is determined to get a nuclear capability and many countries are imposing sanctions against Tehran based on that premise, why not kick out U.N. inspectors and build a weapon?

Besides the recent explosions outside Tehran and Isfahan, foreign agents believed to be directed by Israel have in recent years assassinated several Iranian nuclear scientists – the name of one of whom, Majid Shariari, was chanted by the crowd that attacked the embassy Tuesday. The U.S. and Israel are also thought to be behind a computer worm called Stuxnet that set back Iran’s centrifuge operation a year ago.

The United States, for its part, has accused Iran of supplying weapons to groups in Iraq and Afghanistan that have targeted U.S. troops. The Barack Obama administration also asserts that the elite Quds Force of Iran’s Revolutionary Guards was behind a bizarre foiled plot to kill the Saudi ambassador to Washington.

The latter charges elicited much scepticism in the U.S., but it is possible that Iran would back terrorist attacks in the United States if there is no serious diplomatic effort to de-escalate the current crisis.

Pillar said he believes that Iran is holding the terrorist “capability in reserve until the situation escalates to a higher level than it is right now”.

John Limbert, a former U.S. diplomat who was among the 52 Americans held hostage in Iran for 444 days from 1979-81, said there were also internal political factors behind Tuesday’s actions. Just as the U.S. embassy was an appropriate target three decades ago for Washington’s support of the shah, so the British, long vilified by Iranians for meddling in their country, “are a useful means to get at your domestic enemies”, Limbert told IPS.

He thought the violation of the British embassy was meant to embarrass the government of Ahmadinejad, who has increasingly been at odds with Supreme Leader Ayatollah Ali Khamenei.

Whatever the reason, it is becoming harder to talk to Iran at a time when dialogue is more important than ever.

“The people behind this don’t care,” Limbert said. “It’s hard to talk about mutual respect when there’s officially sanctioned mob rule. You’d think after 32 years, people would have learned something.”