TOKYO, Nov 10 2011 (IPS) - Seven months after a massive earthquake and tsunami devastated northeastern Japan, Japanese citizens and relief organisations are working to learn from the tragedy in order to mitigate the fatal impact of future natural calamities at home and abroad. 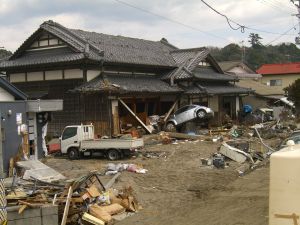 One example is a new programme by Peace Boat, a Tokyo-based non-governmental organisation, to train corps of “disaster relief volunteer leaders” to expedite the rapid recruitment, training and effective and safe deployment of volunteers in crisis situations.

The port suffered the greatest loss of life of any Japanese city from the combined 9.0 magnitude earthquake and massive tsunami which struck on the afternoon of Mar. 11. In all 3,278 persons died and 688 were reported missing in a population of nearly 163,000. A third of the city’s civil service staff were killed in the disaster. Across Japan, nearly 20,000 are confirmed killed or missing.

Ishinomaki has been the focal point for disaster relief support by Japanese and international NGOs. According to a report issued by the organisation in early October, Peace Boat alone had coordinated 6,695 volunteers with 34,388 working days by end-August. “This is the first time civil society organisations have coordinated disaster relief volunteers on this scale in Japan,” Peace Boat International coordinator Takahashi Maho told IPS.

But, Takahashi said, “there were not enough organisations active in training personnel to act in the vital coordinating roles as volunteer leaders who can help manage disaster relief centres, liaise with local governments and other organisations and manage teams of volunteers safely and effectively.

“It took us a couple of weeks to train volunteers – and the first two weeks are crucial in disaster response and relief. We hope to mitigate the damage from the time lost this time by using the lessons and being ready for the next time,” Takahashi told IPS.

The new training programme will include three days of workshops and discussions on natural disasters, field training in the fundamentals of disaster relief volunteer work, basic training in psychological first aid, safety and crisis management and the function and role of volunteer leaders.

Participants will end the course with two days of ‘on the job’ training through managing their own team of volunteers and learning how to react to various possible situations in disaster relief efforts. Graduates will receive certification of training as ‘disaster relief volunteer leaders’ or go on for an advanced course to become ‘certified disaster relief trainers’.

“We hope to both train individual volunteers and share this model with other NGOs, local governments and the national government,” added Takahashi.

The training sessions, two of which will be held each month, will initially only be in Japanese, but Peace Boat aims to offer English language training to international volunteers early next year.

Ishinomaki is being made a model for what civil society can do. Peace Boat president Yamamoto Takashi said when he first arrived on Mar. 17, “I could not believe this was Japan.” Shortages of food, water and fuel persisted until April, he said.

In cooperation with the Ishinomaki City Social Welfare Council, many domestic and international NGOs were able to send thousands of volunteers into the city for the arduous clean-up operation under the umbrella of the Ishinomaki Disaster Relief Assistance Council established by about 30 NGOs and the local authority to coordinate volunteer operations.

Yamamoto said worries that the arrival of volunteers would complicate rescue and relief efforts proved misplaced. “There was a total of about 40,000 short-term and long-term volunteers through here,” Yamamoto said. “We thought it would take nearly two years, but with lots of hard work by volunteers, the clean-up process has gone smoothly.”

By mid-October, remarkable progress had been made in cleaning the city of the hundreds of thousands of tons of mud and debris brought by the earthquake and tsunami. Amid shattered factory buildings, some activity was already returning to the port.

A signal of transition from disaster response to recovery was the closure of shelters on Oct. 13 with the completion of transfer of displaced persons to alternative housing or temporary housing. But Yamamoto cautioned that temporary housing “has its own problems.”

The biggest remains the lack of jobs and transportation. “Ishinomaki’s main industry was fishing, followed by the Nippon Paper Mill and agriculture, but fishing has almost entirely been wiped out,” said Yamamoto.

Takahashi told IPS that the relief needs of the local community have been shifting from the clean-up towards how to restart businesses, cleaning local factories and fishing villages, and preparing for the onslaught of winter.