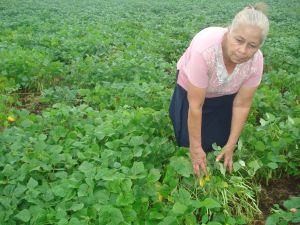 MANAGUA, Nov 29 2011 (IPS) - “Using high quality seed, I harvested 20 quintals (one quintal = 100 pounds), while with ordinary seed I only get 10 quintals,” Vilma Rodríguez, a beneficiary of a seed production programme in the northwestern Nicaraguan province of Estelí, told IPS.

Rodríguez, a 34-year-old mother of four, received training from a local cooperative on how to grow high quality beans on a small farm, and was given a package of inputs like fertiliser and fungicides worth 220 dollars on credit, under the programme “Seeds for Development”.

At the first harvest in May and June she collected 20 quintals, selling 18 to the cooperative at 37 dollars each, paying off her debt and making a profit, and saving two quintals for her own consumption.

“I had no cash to produce crops, but the loan helped me get ahead. Moreover, the cooperative pays me 850 córdobas (37 dollars) per quintal, while the market price is only 600 córdobas (26 dollars). Now I want to plant two more hectares of this seed,” she said.

Small farmers send their beans to the cooperative, which carries out post-harvesting processing: cleaning, drying, testing for moisture content and preparing the seeds for storage.

Inspectors from the government’s seeds office take samples from the different lots for laboratory testing and certification, so that they can be sold, in accordance with the 1998 law and regulations for the production and marketing of seeds.

One quintal of good quality certified bean seed costs 90 dollars nowadays, while a quintal of non-certified seed might cost 40 dollars.

Rodríguez is just one link in the chain of this programme, which is being promoted in six Central American countries by the U.N. Food and Agriculture Organisation (FAO), and which involves cooperatives, associations and government agencies.

The goal is to boost the marketing of high quality seeds, generate income for low-income families, increase production and fight food insecurity in this impoverished region.

In Nicaragua a survey by the International Foundation for the Global Economic Challenge(FIDEG), which carries out applied development research, found that 44.5 percent of the Nicaraguan population of 5.8 million was living below the poverty line in 2010, with poverty levels particularly high in rural areas.

“The project emerged from the global food price inflation crisis in 2008, when the cost of staple foods in Central America soared,” Allan Hruska, a FAO expert on plant protection, told IPS. “Part of the problem was the lack of high quality seeds, because people were using whatever grain was available for seeds, and that led to very low productivity.”

According to the Nicaraguan Institute for Agricultural Technology (INTA), barely 18 to 20 percent of the seeds of staple foods in the country are certified for high quality, on the basis of minimum standards of genetic, physical, physiological and sanitary quality to increase productivity, under the Central American Technical Regulations (RTCA).

FAO identified the need to ensure availability, access and use of high quality seeds by small farmers.

The regional project, “Strengthening Staple Grain Seed Production Policies in support of Family Farming for Food Security in the Member Countries of the Central American Agricultural Council,” financed with close to 12 million dollars by the Spanish Agency for International Development Cooperation (AECID), was launched in late 2009 and will conclude at the end of 2012.

“The main goal is to create and strengthen the capabilities of small businesses with the technical, technological and administrative skills to produce and sell high quality seeds in their communities,” Hruska said.

“The work is focused on promoting the formation of seed companies; training for production and certification of seeds; and bolstering productivity and business development,” Juan Bosco of the FAO-Nicaragua seed programme told IPS.

For now, the project is supporting the creation of five federations of cooperatives, with the intention they should become businesses for the production and marketing of high quality seeds, and be sustainable once the project ends in 2012.

At present, as independent cooperatives, they produce seeds for sale on the local market and for export to countries like Costa Rica and Honduras; however they face many difficulties, including the lack of sales know-how.

“They’re good at producing staple grain seeds, but they’re not good at managing purchases and sales,” said Bosco about some 6,000 seed producers belonging to Nicaraguan cooperatives, 30 percent of whom are women.

Socorro María Olivas, a 57-year-old bean farmer from Estelí, told IPS: “Sometimes the cooperatives do not buy our beans, and the commercial dealers pay very low prices that we have no alternative but to accept.”

Seeds with fake certification put out on the market have also created distrust among farmers.

Aldo Rojas, the head of the seeds and biotechnology programme at INTA, told IPS that “many people, to make a quick profit, bag up ordinary seeds and sell them as certified, and farmers have grown wary.”

The lack of trained inspectors who can certify the product, as well as of regional laboratories to decentralise the certification process, and the lack of opportunities for private certifiers, which would require reform of the seed law, are further problems in the promotion of this industry, according to Rojas.

Another challenge is delivering high quality seed to the poorest farmers, or those who do not belong to cooperatives.

“Our idea is that for every two quintals of beans farmers bring us, we can give them one of high quality seed,” Jairo Videa, a farmer with the Federation of Seed-Producing Cooperatives of the North, located in the provinces of Estelí, Madriz and Nueva Segovia, told IPS.