PAKISTAN: Wanted: A Revolution For Girls

KHAIRPUR, Nov 8 2011 (IPS) - Sixteen-year-old Noor Bano believes nothing short of a revolution will convince the men in Malangabad – her remote village in the Khairpur district of the Sindh province, some 460 kilometres from the southern port city of Karachi – to treat women as equals. 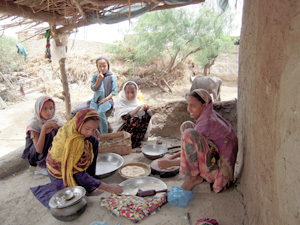 Young girls in the village of Sonu Khan Almani in Pakistan’s Sindh province perform most of the household chores, like making bread. Credit: Zofeen Ebrahim/IPS

Only then, she says, will women and girls be free from forced marriages and be safe from domestic violence. Her words, unusual for such a young girl hailing from the hinterlands of rural Pakistan, take most people by surprise.

Noor’s newly acquired consciousness about women’s liberation is a result of her participation in a six- month programme run by the Leadership for Environment and Development (LEAD) Pakistan, which aims to improve the life skills, mobility, civic engagement, leadership capacities, self confidence and health education of young girls across the country.

Traditionally, poor, rural, unschooled girls in conservative and low-income communities in Pakistan are destined to lives of poverty, illiteracy, early marriage, high fertility and poor health. LEAD hopes to alter all that by intervening in girls’ lives around the time of puberty, with an empowerment programme that they hope will be replicated all across the rural landscape.

One of 22 unschooled and unmarried girls from Malangabad selected by LEAD, Noor, is convinced that “real change” will only come when the girls are able to convey lessons from their training to all the men in the village.

An untapped pool of labour

“We believe investing in these young girls will result in high returns,” LEAD’s CEO Ali Tauqir Ali Sheikh told IPS. “They are the ones who do the most chores like rearing the livestock, gathering water and firewood and looking after younger siblings.”

A recent policy document by the Chicago Council entitled ‘Girls Grow: A Vital Force in Rural Economies’, makes a strong case for teenaged girls, especially those living in developing countries, as the “untapped talent pool” of the future.

According to the report, “(Young women and girls) are decision makers who will help tackle the economic, social, political, and environmental chal¬lenges of their rural homes.”

These “mothers of tomorrow” have the “power to break the cycle of poverty” and provide a better future for their children, the report added.

With skyrocketing food prices and growing concerns about food insecurity, Asad Sayeed, a Karachi- based economist, told IPS, “There has been a visible transfer of incomes and surpluses from urban to rural areas,” adding that, since women currently comprise 50 percent of the agricultural workforce, policies focusing on women’s participation in inclusive economic models are crucial.

Catherine Bertini, former head of the World Food Programme (WFP) and lead author of the Chicago Council report, told IPS, “With no end in sight to rising food prices, families must maximise their food production or their incomes.”

Girls are already the most productive household members, she said, adding that with increased access to “education and healthcare, girls can multiply their families’ options many times over.”

Bertini also warned that with an estimated 70 percent increase in food supplies needed by 2050, “The world will face a hungry future” unless teenage girls “grow up educated, healthy and confident.”

“My mother bore too many children in the hope of having a son,” 16-year-old Rabia Hussain, the third of nine siblings and a participant in LEAD’s programme, candidly told IPS. “If my mother had fewer children, my parents would have been able to give each of us more attention and love.”

Six months ago, Rabia would never have come to this conclusion. “I never thought that we were too many, or that there was a lot of noise or that I was (tasked) with washing too many clothes,” she said. All her life, she saw homes around her filled with too many children; hers was no exception.

“I think I’ve learnt many valuable lessons in these few months,” Rabia said. “There is a purpose in my life now.”

Since all the girls in the programme are encouraged to go from house to house teaching women how to make oral hydration solutions to treat diarrhoea, stressing the importance of childhood immunisation, washing and sterilizing feeding bottles and explaining the importance of birth spacing, Rabia has gained enough confidence to reclaim some space on the male-dominated streets.

She leaves the house more frequently and, despite being a young unmarried woman, has taken a few pregnant women to the nearby basic health unit for prenatal checkups.

“I have no objection whatsoever – she’s doing a good deed and putting into practice what she’s learnt,” Rabia’s father told IPS, proving that the programme has earned acceptance by men in the village.

Sughra Ali’s father also does not mind his 15-year-old daughter going door-to-door to educate the community about health issues. He even claimed that the lessons have made inroads into the home, saying playfully, “We can’t eat food in our house if we have not washed our hands first.”

“She’s found her tongue,” Ghulam Sughra, another participant’s grandmother, commented affectionately. “She used to be very shy and quiet; these hygiene sessions have opened her mind and done her good.”

“I always kept my opinions to myself; I didn’t think they mattered, since I am uneducated,” 15-year-old Sajida Ali told IPS.

Today, she says, all the girls in her school want to her friends, believing that they can learn a lot from her. This has given her a new identity within her own home and community and she’s enjoying the newly acquired limelight.

Some of Sajida’s opinions, however, like the fact that girls should not be married until they are at least 25, may be too radical for the conservative villagers.

“Of course one day we all want to get married, but not when we are mere children ourselves. At 25 the girl is ready, both physically and emotionally, to tie the knot,” Sajida said.

She also hopes to marry a man of her own choosing, quite a departure from Pakistan’s rural cultural tradition whereby a girl is married to a spouse of her family’s choosing as soon as she reaches puberty.

But Nafis Sadik, former head of the U.N. Population Fund (UNFPA), said at the launch of the Chicago Council report that such a tradition is unlikely to change soon.