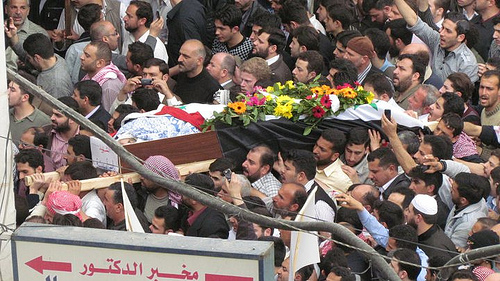 Anti-government protesters carry a coffin in Damascus on Apr. 24, for a march that drew an estimated 10,000 people. Credit: syriana2011/CC BY 2.0

Anti-government protesters carry a coffin in Damascus on Apr. 24, for a march that drew an estimated 10,000 people. Credit: syriana2011/CC BY 2.0

With Russia and China, two permanent members of the Security Council, exercising their vetoes to protect him against U.N. intervention, and Lebanon and Iraq, two neighbouring Arab states, refusing to enforce sanctions against Syria, Assad has continued to survive a political uprising that began more than eight months ago.

A coalition of five powerful member states known by the acronym BRICS – Brazil, Russia, India, China and South Africa – who seemingly think and vote alike, sent an unequivocal message last week following a meeting in Moscow: “Any external interference in Syria’s affairs, not in accordance with the U.N. charter, should be excluded.”

The implications were clear: the Security Council, whose current members include all five BRICS, will not vote for any regime change or military intervention in Syria, as it did with Libya.

But how long will Assad survive the rising tide of mostly Western and Arab opinion against him?

Asked if the one-time moribund League of Arab States was asserting its influence and power, Mouin Rabbani, a Middle East political analyst, told IPS, “If you look at the history of the Arab League, there is precious little evidence that it has ever acted or has ever been capable of acting in the Arab interest.”

This has been the case regarding Palestine, Lebanon, Iraq, Western Sahara and elsewhere, he said. “And more recently, we have seen it fail in Libya, Bahrain and Yemen. It is unfortunately no less true with respect to Syria.”

There has been much talk of the Arab League initiative on Syria as presenting an alternative to international intervention.

“I think it would be more accurate to say that the sponsors of this initiative would dearly like it to be the precursor to such intervention,” said Rabbani, a contributing editor to the Washington- based Middle East Report.

The fact of the matter is that key Arab states – most particularly Saudi Arabia – have determined that regime change should be pursued in Syria at any cost and irrespective of the cost in Syrian lives, he said.

One need only examine what happened in Libya, and take into consideration this is child’s play compared to what might transpire in Syria, he added.

At the United Nations, a double veto by Russia and China last month derailed a Western-sponsored resolution condemning the killings of civilians in Syria.

Although no single Arab state voted against the resolution, it was adopted by a vote of 122 in favour, 13 against and 41 abstentions, which included Russia and China.

Just after the vote, Philippe Bolopion, U.N. director at Human Rights Watch, said that by siding with the victims of the Syrian government’s ruthless repression, the General Assembly has succeeded where the Security Council had failed, paralysed by the vetoes of Russia and China.

The Security Council should take notice and get to work on a resolution imposing an arms embargo, referring the case to the International Criminal Court and sanctioning the Syrian leaders involved in the abuse, he said – even as Western nations are planning a second Security Council resolution against Syria.

According to the United Nations, more than 3,500 civilians have been killed during the uprising which began last March.

But Syria points out that the killings also include members of the security forces killed by protesters.

George A. Lopez, the Rev. Theodore M. Hesburgh, CSC Professor of Peace Studies at the Kroc Institute for International Peace Studies at the University of Notre Dame, told IPS, “I believe that the Arab League and US-UK-Canada-EU sanctions begin the avalanche that brings down the regime in six to nine months.”

It will do so by dramatically reducing Assad’s access to liquid cash; constraining his ability to diversify his weapons purchasing; and further limiting the declining revenues that Syrian business elites are earning, he said.

The sanctions’ impact will also provide a significant psychological boost to the dissidents.

The governments’ economic maladies will spark more defections from the armed forces and weaken Assad’s support among the monied class, which will be pushing for the government to negotiate a power transfer, said Lopez, who was on the U.N. panel of experts monitoring sanctions against North Korea.

“Assad’s increased repression will be met with more firepower from the revolt, which will turn the nation to full-scale civil war,” he predicted.

Rabbani told IPS, “My own view is that entrusting the interests and future of Syria to the Arab League – or rather those Arab regimes in cahoots with Washington and Tel Aviv that currently control its decision-making – makes about as much sense as entrusting it to Iran.”

He said the idea that the interests of the Syrian people somehow form a motivation for those pursuing Arab League activism simply beggars belief.

“So Bahrain is on board to promote the rights of a disenfranchised minority, the Saudis to ensure equality for women, and the United Arab Emirates to ensure freedom of expression, is enshrined in the new Syrian constitution? Get real”.

“For many Arabs, including many of those who like myself consider that the Syrian regime has responded to the entirely legitimate demands for change and freedom by its own people with despicable ruthlessness to an extent that it can no longer claim legitimacy of any sort, there is also something particularly unseemly about a purportedly Arab League prepared to impose sanctions and other measures upon Syria – and for that matter Libya and Iraq previously – that it would never countenance imposing upon Israel.”

“Where was the Arab League when Gaza and before it Lebanon was being bombed to smithereens by the Israeli airforce to the sounds of rapturous American applause?” he asked.

He said there are no simple answers to the situation in Syria. “Given the murderous obstinacy and arrogance of the regime it appears to have left no alternative short of regime change.”

But regime change effected through foreign intervention – as in Iraq – will make people rue the day these illegitimate leaders are ejected from power, he added.

“It needs to be made clear that ultimately the regime bears responsibility for the consequences of its murderous activities. But this does not in any way make the activities of outside powers legitimate,” Rabbani said.